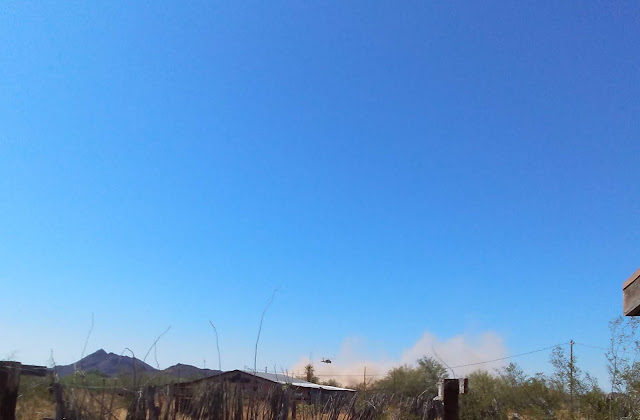 ALI JEGK -- Tohono O'odham of Ali Jegk community, along the border, just sent these images to Censored News. The military helicopter appears to be "dusting" O'odham, residents reported.
Ali Jegk is located on the far west side of the sovereign Tohono O'odham Nation.
It is located in Gu Vo District, which continues to oppose the Israeli spy towers recently approved by the tribal government.
O'odham said the planned construction of the integrated fixed towers will disturb a Ceremonial area and burial place. The same area was dusted by a military helicopter late today.
Ebit Systems is the contractor selected by US Homeland Security. Elbit is also the Israeli defense contractor which provides Israel with Apartheid Security in Palestine.
The Ali Jegk village is located near Organ Pipe National Monument, on the Arizona border, a site that Trump has selected as a priority for border wall construction to begin.

Copyright Censored News, may not be used without permission. Images copyrighted by O'odham photographer.
at June 27, 2019