'Our Mother Earth is not for Sale' Zapatistas attacked in Colima, Oaxaca, and Mexico City 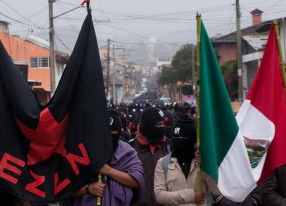 The passage of neoliberal capitalism is marking its steps with the blood of our peoples, where war rages because we do not cede our land, culture, our peace and collective organization; because we do not give in to our resistance or resign ourselves to death.

We denounce the cowardly attack perpetrated last May 31 on the Nahua indigenous community of Zacualpan, members of the National Indigenous Congress in the municipality of Comala, Colima, in which a paramilitary drug firm fired large-caliber weapons against a group of young people, killing one of them and seriously injuring three more.

Given the serious facts, we hold the three levels of the bad government responsible for the operation of these narco paramilitary groups in the region, mainly the director of public security Javier Montes García. We demand full respect for the uses and customs of the Nahua indigenous community of Zacualpan.

We condemn the aggression and destruction that occurred at dawn on May 31 in the towns of Rebollero and Rio Minas, belonging to the Binizza community of San Pablo Cuatro Venados in the municipality of Zachila, Oaxaca, at the hands of an armed group, which violently destroyed them the house of dozens of families.

A large group of people arrived at the town firing heavy weapons and accompanied by heavy machinery, after many shots demolished the houses, forcing them to go out and take refuge in the mountain to the comrades, among whom were minors. age.

They demolished 24 houses, burned corn and other grains stored as seeds for planting, burned the personal belongings of the community such as clothes and shoes. In addition, livestock, power plants and water pumps were stolen.

We condemn the repression and dispossession committed against our comrades from the Otomí indigenous community living in Mexico City who, violently, were evicted by shock groups in the service of the bad government and real estate companies, along with hundreds of grenadiers. at the service of Néstor Núñez, head of the Mayoralty of Cuauhtémoc, on May 30 at 11:00 a.m. in the camp they kept on the street of London No. 7, Col. Juárez, from where the Otomí community maintains temporary camps since the earthquake occurred on September 19, 2017.

We condemn the paramilitary narco siege that criminal groups, overlapped and supported by the three levels of the bad government and all the political parties, maintain against the communities of the Indigenous and Popular Council of Guerrero-Emiliano Zapata (CIPOG-EZ) in the municipality of Chilapa and José Joaquín de Herrera, who autonomously build peace with their struggle.

We call on the peoples of Mexico and the world to be attentive and supportive of the struggle of the peoples of Guerrero, to break the siege imposed by violence by the capitalist appropriation of indigenous territories, which limits the entry of food and medicines. We call to support the collection of provisions that will be destined to the affected communities, and that will receive products such as corn, rice, beans, tin chilies, sugar, sardines, tuna, toilet paper, diapers and medicines, in the premises of UNIOS, located at Dr. Carmona Street and No. 32 Valley, Colonia Doctores, in Mexico City.

We reiterate that our mother earth is not for sale to the great capital or to anyone, our existence is not negotiated and therefore neither is the resistance of our peoples.

Sincerely,
June 2019
For the integral reconstitution of our peoples
Never again a Mexico without us
National Indigenous Congress Indigenous
Council of Government
Zapatista Army of National Liberation
at June 04, 2019

I am confused; Zacualpan and Comala, Colima are two different places, in two different states. Is there any more information I could find?
I know Comala well. Thank you.

Leslie, Here's more about the community, from 2013. "Indigenous Council for the Defense of the Territory of Zacualpan
Zacualpan, Colima. In recent weeks, the town of Zacualpan, in the municipality of Comala, has joined the growing number of farming and indigenous communities facing conflicts over mining. A few months ago, this indigenous Nahua community began hearing about a plan to build a mine – backed by Rigoberto Verduzco Rodríguez – from which gold, silver, copper and manganese would be extracted, without an environmental impact study or any approval process or permits in the offices of the Ministry of the Environment and Natural Resources (SEMARNAT) in Colima."