Carrizo Comecrudo and protectors celebrate that the cemetery will be protected. However, it is unknown what this means for the land and for access to the water of the Rio Grande, as the border wall is still planned for this region.

The U.S. Customs and Border Protection said it will not build Trump's Border Wall on the historic Eli Jackson Cemetery. The site is being protected by a camp of Carrizo Comecrudo tribal members and their supporters at Yalui Village.
"The U.S. government says it won't build President Donald Trump's border wall on the site of a historic cemetery that might have required the exhumation of graves," AP reported today.
Carrizo Comecrudo Chairman Juan Mancias said, "Victory on the Levee of the Rio Grande. Historical and village identified. Victory Dance for struggle won. Epapue’l Village and Lehai And Ko’pte In Starr county can be manned now. Nana Pele’x ment Nawaso’l," Mancias said.
Thanking all those who are making a stand, Chairman Mancias said, "We stand."

The U.S. Congress halted plans to build the border wall on the National Butterfly Center property, but the appropriations could change at any time, warns the director.
Last week, Govinda Dalton, reporting live, shared this video with Censored News.
Censored News reported last week that Carrizo Comecrudo tribal members are protecting the resting places of their ancestors from construction of the border wall. The construction now threatens their people, their cemetery and their homeland along the Rio Grande River.
"These ancestors are projected to be bulldozed over by the border wall," said Christa Mancias, daughter of Carrizo Comecrudo Tribal Chairman Juan Mancias.
Flowing between the lands now called the United States and Mexico, is the river of rivers, one that is truly grand, the Rio Grande River, and on both sides of the river are the homelands of the Carrizo Comecrudo.
"That river has run through this continent for thousands of years and brings life into the people, it brings life into the land. It is another genocide that we have tried to fight," Christa said.
The planned border wall will cut off peoples' access to this grand river, the Rio Grande, the fifth largest river in North America, and the cemetery would be bulldozed.
"We are trying to protect our ancestors so they will not be forgotten anymore."
Christa called the border wall a smokescreen.
"The wall is not being built on the border. It is being built three or four miles from the river."
If the border wall is built here, it would create a no man's land that oil and gas pipelines and others could build on. The massive development and harsh lights would destroy the pristine natural habitat.
Near the Eli Jackson Cemetery, protectors are camped at the Yalui Village to defend the ancestors burial places.
Looking at the camp, where the protectors have set up tents, she said, "We are trying to set up to be a self sustaining village."
The U.S. government has waived 28 federal laws, including the Native American Graves,  Protection and Repatriation Act, Endangered Species Act, and a long list of federal laws enacted to protect the water, air, fish, land, wildlife and people.
The U.S. government has waived the federal protection laws in order to act with impunity.
Carrizo Comecrudo are here to protect their ancestors, the land, this river, and future generations.
Many of the burial places were covered in grass, and they have cleaned the cemetery, with graves dating back to 1824 and 1829. There are many veterans buried here.
"We are trying to protect land, sacred places, our sacred river"
Since the cemetery is three to four miles from the Rio Grande River, if the border wall is built here, developers in collusion with the United States government could seize the land for commercial enterprises.
The land is sacred, and the river is sacred.
And the families here have a personal reason for protecting it. This is the resting place of their ancestors.
"We do have family members buried in the cemetery."
Walking near the levee, she said, "This cemetery is right up against the river."
"Where we are standing now, would be a border wall."
The United States government has not even told her people whether they will rebury their relatives, or even if they will rebury their ancestors.
"It is not right, it is not fair."
On Memorial Day, she said, "Today of all days, we remember those who are gone."
Walking close to the Rio Grande levee, she said, "The border wall would wipe out the whole cemetery."
Farmers would lose their land, and people would lose their homes.
In the cemetery, there are 150 graves here, and some are not marked.
When the families leave this world, they want to be buried with their relatives. They want be able to be buried with their mothers and fathers, brother and sisters here, and another just down the road.
"Water is life."
During the interview, broadcaster Govinda Dalton said, "There is a whole lot of land that is going to be lost," pointing out that if a foreign country invaded and took this much land, there would be an outrage.
"You would think people would revolt."
Christa said, "And there hasn't been, except for those standing here, protecting our sacred land, our sacred river. It is just a shame that this will be gone."
Chairman Juan B. Mancias told Censored News, "Everyone has got too ask themselves the question why waive such laws just to build a wall? Are there other purposed intentions for use of the border wall land seizure? There are LNG and Oil pipelines that are under scrutiny at this time; will they utilize the waiving of the laws to connect from west Texas to the coast?" Chairman Mancias said.
"Even the rich kids spring break partying place is jeopardized by waiving these laws to build LNGs near Port Isabel and South Padre Island. Nothing is sacred when u put a money tag on it." 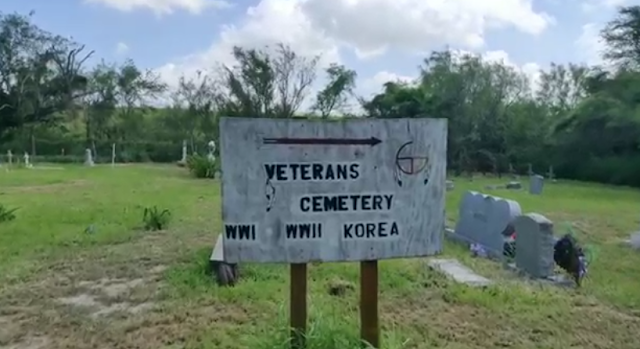 More in this series from the Texas border: