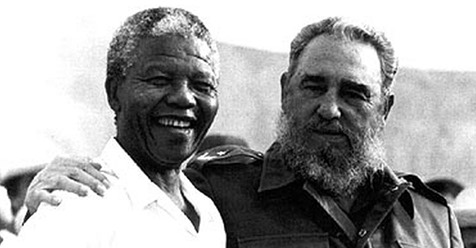 How Cuba helped eliminate Apartheid in South Africa, by destroying the myth of the invincibility of the white oppressor

Nelson Mandela said, “The Cuban victory,” referring to the Cuban victory over the South Africans in Angola in 1988, “destroyed the myth of the invincibility of the white oppressor and inspired the fighting masses of South Africa. Cuito Cuanavale,” which is a victory of the Cubans in Angola, “is the turning point in the liberation of our continent and of my people from the scourge of apartheid.”
Watch on Democracy Now!
https://www.democracynow.org/2013/12/11/the_secret_history_of_how_cuba?fbclid=IwAR18vLBB6rxyI9oR3zc_TG3GH73ghpLfDrHjmleaFj-duYaoV26Wep-UCfk
Posted by Censored News, publisher Brenda Norrell at July 11, 2019