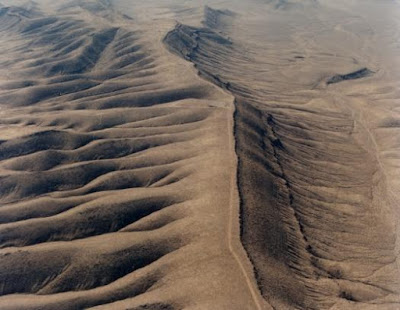 The Western Bands of the Shoshone Nation are urging opposition to U.S. Senate bill 1234, to protect sacred Yucca Mountain from becoming a high-level nuclear waste dump.

Ian Zabarte, Principal Man of the Western Shoshone Bands, asked Native American leaders to take action.
"This purpose of this letter is to ask you to write a letter to the US Senate opposing S. 1234, the Nuclear Waste Administration Act because it does not exclude Yucca Mountain as a site for storing high-level nuclear waste and removes the cap on the total amount of the high-level nuclear waste at the site," Zabarte said in the letter below.

In a statement to the U.S. Senate, Western Shoshone said, "The Department of Energy has failed to prove ownership to the proposed Yucca Mountain site, title to which, is vested in the Western Bands of the Shoshone Nation of Indians under the 1863 Treaty of Ruby Valley, Consolidated Treaty Series Volume 127 (1863) that is in “full force and effect.” The Treaty of Ruby Valley is the “supreme law of the land” under the US Constitution and legislation should reflect the fact that Shoshone title remains unextinguished."
In its letter below, the National Congress of American Indians said Yucca Mountain should not become a nuclear dump, reiterating that Native Americans should no longer suffer from the Nuclear Era.

Senate Energy and Natural Resources Committee 304 Dirksen Senate Building Washington, DC 20510
For the Record: S. 1234 Nuclear Waste Administration Act
Dear Senator,
The Western Bands of the Shoshone Nation of Indians are an intervenor in licensing of the proposed Yucca Mountain high-level nuclear waste repository before the Nuclear Regulatory Commission, Atomic Safety Licensing Board Panel, Docket 63-001. Our primary contention is ownership. Site ownership outside the reservation’s boundary is required by 10 CFR 63.121. Additional contentions cover ownership of water rights and disproportionate burden of radiation exposure risk, an environmental justice issue.
The Department of Energy has failed to prove ownership to the proposed Yucca Mountain site, title to which, is vested in the Western Bands of the Shoshone Nation of Indians under the 1863 Treaty of Ruby Valley, Consolidated Treaty Series Volume 127 (1863) that is in “full force and effect.” The Treaty of Ruby Valley is the “supreme law of the land” under the US Constitution and legislation should reflect the fact that Shoshone title remains unextinguished.
The Shoshone people have borne the impacts of radioactive fallout from nuclear weapons testing alone. Radiation exposure protection standards for the proposed Yucca Mountain site are not protective of Native Americans. Our research of health consequences demonstrates significant increased radiation exposure risk based on lifestyle differences compared to non-Indians. Any legislation forcing additional radiation exposure risk on the Shoshone people without studying and mitigating past radiation exposure impacts is wrong and we do not consent to Yucca Mountain being a global spent nuclear fuel waste site.
The first step in any consent-based approach is funding for baseline health assessment of Native American communities to protect the health and well-being of our people in down-wind communities. We oppose the Nuclear Waste Administration Act, S. 1234 because it does not exclude the proposed Yucca Mountain site. We look toward asserting ownership of Yucca Mountain at licensing and submitting additional contentions should licensing of the proposed Yucca Mountain site resume.
Sincerely, 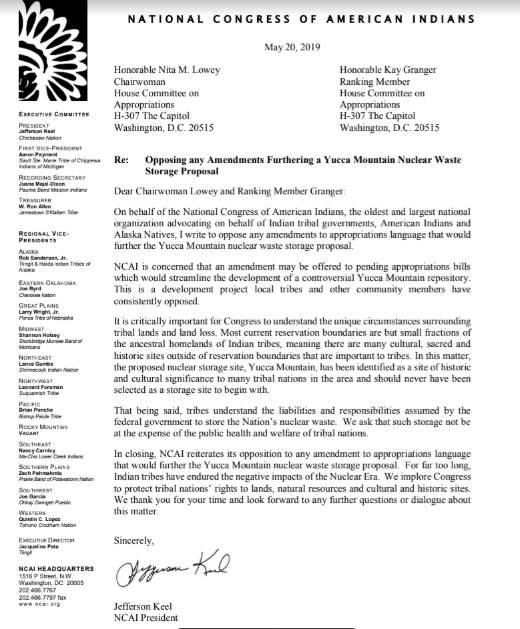 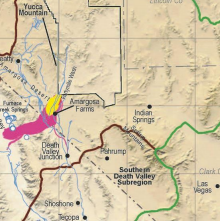