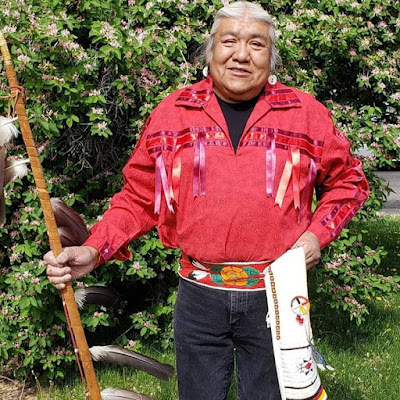 As of March 9, the Navajo Nation announced Thursday evening they had 558 identified cases, with 22 confirmed deaths. That's an increase in 70 positive cases from the previous day. Of the 558 cases, 405 involve residents on tribal land in Arizona counties. The Navajo Nation includes parts of Arizona, New Mexico and Utah.

On Thursday, Navajo Nation President Jonathan Nez and Vice President Myron Lizer announced the self-quarantine after coming in contact with the first responder on Tuesday, according to the Navajo Nation statement. "This is real and no one is immune from contracting the virus," Nez said, "I have been informed that the officials with Army Corps and National Guard are also self-quarantining to be on the safe side and are doing fine," Nez said.

A 57-hour curfew will take effect on the nation from 8 p.m. Friday until 5 a.m. Monday, except for essential employees who are required to have documentation from their employer.

Authorities in northern Arizona have arrested a man for writing a racist social media post accusing Navajo people of carrying the coronavirus and calling for their deaths.

The Page Police Department announced Tuesday, March 7, 2020, that 34-year-old Daniel Franzen was taken into custody on suspicion of attempting to incite an act of terrorism.

Police say they received reports Monday of a Facebook post that urged people to use "lethal force" against the Navajo community because they were "100% infected" with COVID-19.

On this past Sunday, April 5, 2020, the Hopi Village of Bacavi said a single person has contracted COVID-19 with symptoms on Saturday, evening. Due to this, all Hopi Villages are now closed.

If you have ever been to Hopi, many of the home's entrances are only 5 feet from one another. Families are prohibited from visiting one another. There is a small grocery store in which meat and miscellaneous items are sold to the citizens of the Hopi Community. This will be a problem as the villages are on a 14-day quarantine.

Many native tribes on Turtle Island, Indigenous people from around the world and non-native believe in many of the Hopi prophecies of which have come to fruition for the people of the world.

Indian Pueblos implement curfews, ban visitors after COVID-19 outbreaks. On Tuesday, the Pueblo of Zuni hit 24 positive coronavirus cases. There were at least 54 in the Pueblo of San Felipe, and at least 31 in Zia Pueblo.

Two thousand miles away at the Cherokee Nation in Oklahoma, where 11 people have tested positive for the virus as of Friday and one has died, "We're preparing for the worst," Chief Chuck Hoskin Jr. said.

As we pray let's not forget to include our Native and non-Native Doctors, Nurses, and Medical Personnel, Home Care Aids, EMT, Paramedics and all branches of Law Enforcement, TSA agents, Baggers including Store Clerks who care for the empty store shelves, Truckers who bring needed items to all people, the Laborers who work for minimum wages, to the Postal Workers, Professional Singers, Song Writers gone all too soon, Famous Publishers, and most importantly the Grandpas, Grandmothers, Mothers, Fathers, Brothers, Sisters, Nephews, Aunts, Uncles, Sons, and Daughters, Newlyweds, and sadly Young Adults and Children. Not limited to only those people listed, also including all People of Color who have been affected, as this virus does not discriminate as our Native Citizens of Native Communities across Indian Country have also been affected.

Be safe, use common sense, protect your families, love ones and always wash your hands.

We will prevail with positive hope, payers, courage and love of one another.