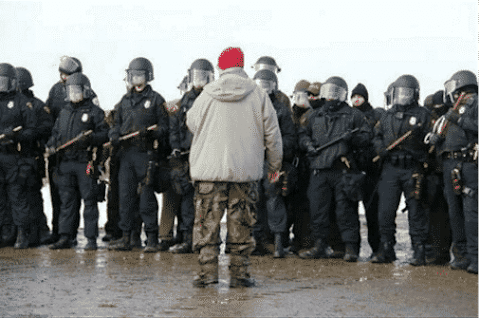 
Mr. Poemoceah was at Standing Rock in 2017 to support the peaceful opposition to the construction of the Dakota Access Pipeline (DAPL), led by the Oceti Šakowiŋ (the Seven Council Fires, or Great Sioux Nation). The DAPL pipeline, also known as the Black Snake, was recently found to be illegal by the federal courts. At all times, Mr. Poemoceah remained peaceful and non-violent in his opposition to the pipeline, often livestreaming the Indigenous-led movement to thousands of online supporters.


On February 22, 2017, Eric W. Poemoceah was peacefully demonstrating against DAPL. He was unarmed, facing a group of about 30 militarized law enforcement officers clad in riot gear, with about 15 feet between him and the group of officers. Mr. Poemoceah was calmly, firmly, but not in a loud voice, reasoning with the officers, in hopes of negotiating a peaceful process for allowing elders to leave the Water Protector encampment, which had been in place for several months.


His words to the officers were:


“I know you have a job to do and a family to provide for, but why do it with protecting oil? That’s all we’re trying to do, sir, is protect–protect the water. I know–I know you’re looking at me and I know you just shook your head yes because you have a heart. You have a soul. And I know–you look like a very prayerful man. Why don’t… you be honorable and set down your badge right now in front of 6,100 people.”


Under the command of two North Dakota Sheriffs, Kirchmeier and Laney, as “incident commanders” doing the bidding of the fossil fuel industry’s DAPL, dozens of militarized police officers charged at Mr. Poemoceah without any warning as he filmed police on ND State Highway 1806. Bismarck police officer Swenson tackled Mr. Poemoceah and threw him to the ground, engaging in overt police brutality that resulted in significant injuries to Mr. Poemoceah, including a broken pelvis. The sudden decision to charge toward the Water Protectors was the result of law enforcement’s inability to remain calm, poor training, a desire to retaliate against activists, and law enforcement’s general malice and contempt toward the Water Protectors, including Mr. Poemoceah. Laney later traveled around the country pushing the “Standing Rock model” of police misconduct and unconstitutional repression of lawful dissent to local police departments along pipeline routes and other controversial climate-destroying projects likely to garner opposition from local communities.


Instead of having an ambulance come down the road, or bringing a gurney, the officers mocked Mr. Poemoceah’s requests for medical care and after a couple of minutes forced him to walk at least two hundred feet with a broken pelvis to a police van. Throughout the interaction, as with other Indigenous Water Protectors in the Standing Rock demonstrations, the police officers belittled, dehumanized, and insulted Mr. Poemoceah. Many of the police officers who participated in the response to the Standing Rock DAPL demonstrations had no prior experience or appropriate training in responding to large-scale demonstrations, the exercise of First Amendment rights by demonstrators, or the constitutional limitations upon the use of force against non-violent demonstrators.


“This lawsuit will not only uphold the rights of Indigenous Water Protectors to vigorously exercise their First Amendment rights to demonstrate against the fossil fuel industry and defend Native sovereignty, but will also draw a clear line in the sand for police who are paid to protect future fossil fuel calamities,” said Lauren Regan, CLDC Executive Director and one of the attorneys who filed the case. “You will be held accountable for abusing human and civil rights that are at the heart of our democracy; you will be responsible for exacerbating catastrophic climate change that will destroy the future for all; and you have violated the oath taken to protect and serve the people–even those engaged in dissent.”


“A society where people can protect water without fear of punishment is a better place to live,” said Marianne Dugan, CLDC Senior Staff Attorney. “No one should be assaulted for standing up against powerful interests when they see a threat to our planet.”


“I was at Standing Rock to help protect our sacred water and stand up for our environment and basic human rights. I hoped to be a voice for everyone who couldn’t be there and to document all the events that transpired for the whole world to see. Unfortunately, we recognize that there are going to be future struggles to protect sacred land and water from the Black Snake. It is my hope that this lawsuit will help protect the brave people who will stand up and defend Mother Earth at the next conflict over the fate of our planet,” said Eric Poemoceah, Comanche Water Protector.

The Civil Liberties Defense Center supports movements that seek to dismantle the political and economic structures at the root of social inequality and environmental destruction.