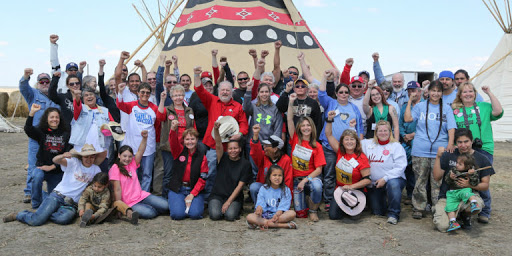 GREAT FALLS, Montana — A federal judge ruled today (see ruling below) that the US Army Corps of Engineers violated the law when it approved Nationwide Permit 12, a key water crossing permit for TC Energy’s Keystone XL tar sands pipeline and many other pipelines nationwide. The ruling invalidates Nationwide Permit 12, prohibiting the Corps from using this fast-tracked approval process for any pipelines nationwide, including Keystone XL. The ruling could block construction through hundreds of water crossings along the Keystone XL pipeline route.

The ruling comes in response to a lawsuit filed by conservation and landowner groups last year, which challenged the Corps’ failure to adequately analyze the effects of pipelines authorized under Nationwide Permit 12, including Keystone XL, on local waterways, lands, wildlife, and communities.

The Keystone XL pipeline is also facing ongoing legal challenges from Indigenous groups and Tribes, who have challenged President Trump’s attempt to unilaterally approve the cross-border segment of the pipeline. Construction on that cross-border segment began last week, and the court will conduct a hearing tomorrow on whether to block construction on that segment as well. Meanwhile, Montanans are also urging Governor Steve Bullock to put a hold on construction amid the COVID-19 public health crisis.

“Farmers and ranchers rely on clean water and land security. TransCanada continues their efforts to go around the law in order to build their risky pipeline,” said Jane Kleeb, Bold Alliance Founder. “Hopefully this clear directive from the courts will make it clear TransCanada and our own federal government can not run roughshod over Americans to help out a corporation’s shareholders.”

“This is a tremendous victory for imperiled wildlife that rely on rivers, streams and wetlands,” said Jared Margolis, senior attorney with the Center for Biological Diversity. “This ruling makes it clear that the Trump administration can’t continue to push dirty fossil fuel pipelines while ignoring the devastating impacts they have on the environment.”

“This ruling proves, once again, that we are a nation of laws no matter how many times powerful forces seek to undermine bedrock American legal protections,” said Dena Hoff, a Northern Plains Resource Council member and Glendive, Montana farmer. “Given this new development, it’s imperative that all construction be halted to protect Montana’s rural and tribal communities during this pandemic. How, in good conscience, could we risk overwhelming our most vulnerable health care systems for a Canadian project that has never proven to be legally viable?”

“The Trump Administration has gone out of their way to repeatedly and unlawfully ram through permits for this destructive pipeline,” said Marcie Keever, legal director with Friends of the Earth. “Keystone XL and other proposed fossil fuel pipelines would devastate frontline communities and wreak havoc on our environment. Today’s ruling sends a clear signal nationwide that people and the planet must come before profits for polluting corporations.”

“The Trump administration has repeatedly violated the law in their relentless pursuit of seeing this dirty tar sands pipeline built. Today’s ruling confirms, once again, that there’s just no getting around the fact that Keystone XL would devastate communities, wildlife, and clean drinking water,” said Sierra Club Senior Attorney Doug Hayes. “It was true a decade ago, and it’s just as true today: Keystone XL would be a bad deal for the American people and should never be built.”

“The Trump Administration’s ongoing effort to give out goodies to Big Oil hit another setback. Whether they like it or not, the Corps cannot skirt foundational environmental laws. And projects like the Keystone XL tar sands pipeline will remain stalled as long as the Administration keeps trying to illegally fast-track them,” said Natural Resources Defense Council (NRDC) attorney Cecilia Segal.
Court document:
http://boldnebraska.org/press-release-yet-again-federal-court-invalidates-key-permit-for-keystone-xl/
at April 16, 2020