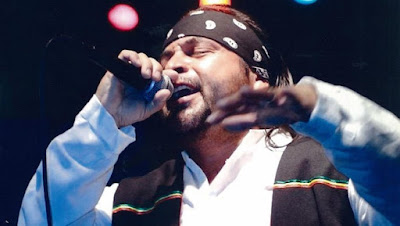 Notice to our readers: The newspaper Indian Country Today, in a breach of ethics, removed my byline from this article, which I wrote as a staff writer, and put a fake name on it. As journalists, we must ensure that this theft of our work does not continue and publicly condemn this violation of ethics. -- Brenda Norrell

Revisiting the powerful words of Casper

PHOENIX, Ariz. - Casper's underground reggae sound on his new compact disc, ''Honor the People'', examines the imprisonment of Leonard Peltier and the corporate root of the war in Iraq. The Hopi artist from Third Mesa questions who won the last presidential election and how long before the voices of truth are silenced in America.

''There are things that need to be addressed at all cost. My biggest concern was that I might be jeopardizing my freedom, but somebody's got to do it,'' Casper Lomayesva said.

The brave new sound of ''Honor the People'', Casper's third compact disc, is a musical blade cutting into the truth of genocidal boarding schools, the corporate seizure of Indian land and water and harassment by ''Rez Cops.''

''I'm surprised it got released, especially with the content,'' said Casper, who performs with the Mighty 602 Band in the Southwest and nationwide with Root Awakening, based in Santa Cruz, Calif.

''We're living in pretty rough times and it is going to get rougher. People all over the world doing this music are under a lot of scrutiny. We have to say something because in the near future we may not be able to without being incarcerated or shot.''

At 36, the CEO and founder of Third Mesa Music has already accomplished his lifetime goals. Reggae sound and fearless lyrics set him apart. ''I've got a different path. I like to call it 'Underground Native,' because we go beyond the beads and feathers.''

Casper's message is respect for Indian sovereignty, human rights, honor for women and respect for all races of mankind. He sends a special message to Native youths: Stay in school and question everything.

''Question authority,'' he said, urging Natives to use their senses to determine truth. ''Don't listen to the crap the government is trying to push down your throats; believe what your elders told you.''

Why did a Hopi-Navajo growing up on Third Mesa choose reggae for his root sound?

''I used to see the best reggae in the world right there on Hopiland. I'd see these guys on stage and I'd say, 'This is my calling, this is who I am.'''

These days he listens to everything from hip hop to jazz. One thing is for sure, people everywhere are begging for positive sounds, wanting to hear something to jump start life and live it to its fullest.

Casper said he is surprised at how far his music has gone. ''I've accomplished everything I set out to do. It's like therapy. It helps me get what's inside my head out.

''We're all human beings. I'm just speaking as a human being in this time and in this space. It is important that people speak up; the future is not promised to any of us.

With the steady beat of reggae, Casper sings, ''Set up, set up, frame up, frame up, set him free.'' ''Brother Leonard,'' Casper sings to Leonard Peltier, ''Take it one step further ... so we will not forget.''

In the title song, he sings, ''Honor the people, 'cause your treaties are unlawful.''

He sings of decaying treaties and the trail of broken hearts, of genocide and slavery, relocation and the stealing of the Mississippi and broken dreams for the Shawnee and Chickasaw, Cherokee, Oneida, Apache and Comanche.

Breathing and living for the relatives, he sang for them to hold on to life, ''The value of life must be thick, not thin.''

In a perfect world, he sang, there would be no more destruction. In ''Ideal,'' he says that his microphone and his lyrics are his only weapons.

''It's time to heal with positive thoughts, time to halt the injection of the negative.

''Bringing positive music, that's my pleasure,'' sang Casper as he called out the names of the places - New Mexico, Rhode Island, Quebec - of Native people in his song, ''If you're ready.''

Casper said in an interview that he believes in the democracy of this country and the hope that his ancestors died for. His older brother is currently in the military in Iraq. Casper's father, brothers, cousins and aunts, 20 in all, have served in the military.

Casper remembered his Hopi grandfather Sankey Lomayesva who nurtured him on Third Mesa and remains with him in spirit.

In his ''Last Train to Hopiland'', he sang of the greed of world leaders, now running cold, and said that if you're planning on riding the last train to Hopiland, you had better run, run.

Onstage, whether in a regular gig or sacrificing his own dollars to protect mother Earth, like in the recent Winds of Change Tour, Casper's energy never falters.