The destruction by border wall contractors accelerates after President Biden's order to halt construction
By Brenda Norrell
Censored News
Border wall construction is continuing on the Arizona border, even though President Biden issued an executive order for it to halt on his first day in office.
Border wall contractors continued the destruction of blasting mountains and destroying critical habitat of endangered species this week after President Biden  ordered it halted.
The destruction is documented in three areas on the Arizona border, including at Organ Pipe National Monument, where the battle has been ongoing to protect the sacred springs.
Already, Tohono Oodham burial places were  blown up with dynamite at Monument Hill for border wall construction.
Now, a construction worker near Lukevilke said there is no indication that they are going to stop work.
Here, near Ajo, the contractor is Southwest Valley Constructors.
https://www.kold.com/2021/01/22/were-going-keep-working-construction-worker-border-project-says-no-word-immediate-pause-following-president-bidens-order/
Laiken Jordahl said on Friday that border wall construction continues southeast of Tucson at the Coronado Memorial, east of Nogales, and south of Sierra Vista, further endangering the critical habitat of jaguar.
Video on Twitter 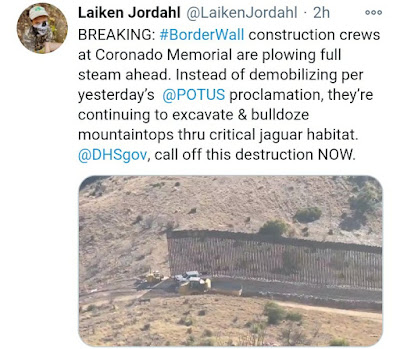 Border wall construction continued at the site on Saturday. 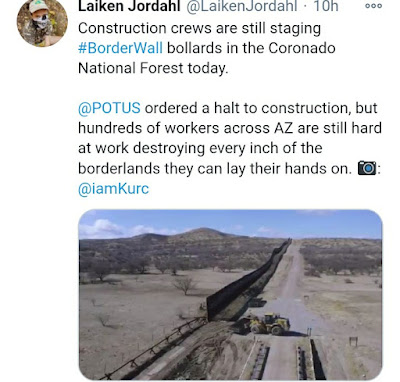 In another pristine wilderness, border wall construction continued this week at the Buenos Aires National Wildlife Refuge, southwest of Tucson, located near the Tohono O'odham Nation's eastern border, and near the remote border crossing of Sasabe and town of Arivaca.
Video on Twitter 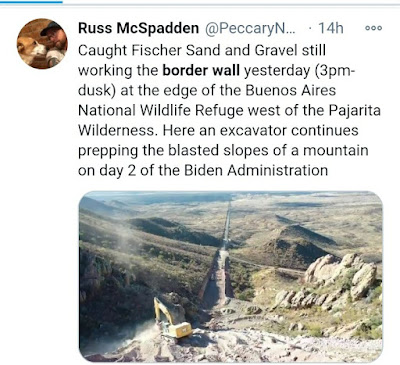 The construction of these pieces of a border wall have destroyed O'odham burial places, destroyed protected and endangered species, and drained the precious water of the Sonoran desert.

The border wall is a symbol of racism and hate, and the United States' vile and failed national political policies.

On the Texas border, border wall contractors continued the destruction near the National Butterfly Center on Friday, as shown below. 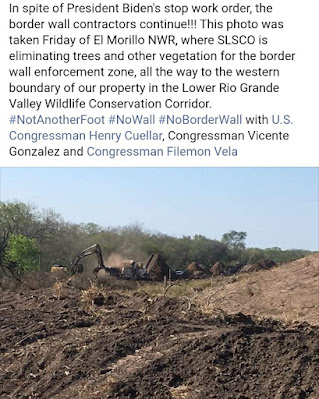 Reading through the executive order it reads quite differently than what the/our government, the media and the big greens and/or the favored Non Governmental organizations (NGO’s) are touting.

Starting with the title:
"Proclamation on the Termination Of Emergency"

Termination of the “Emergency” proclamation. This says it All,does it not? No mention of abandoning the construction of a border wall.
And
"...I have determined that the declaration of a national emergency at our southern border in Proclamation 9844 of February 15, 2019 (Declaring a National Emergency Concerning the Southern Border of the United States), was unwarranted."

Here the Declaration of a national emergency is what is being addressed. And as one continues; the entire proclamation is riddled with exceptions and exemptions….

This; and all other past and present actions, proclamations and declarations exemplifies the USA as the land where settlers are“educated”, trained, and train others, throughout mother earth,to believe they are blessed with a god—“Their God”—given right/s of superiority over all, including rights to govern thought and action. This also includes a moral righteousness where destroying the lives of all others in horrific ways is an honorable action—Simply 'Honestly' review the history of all those held in high esteem where their likeness are scattered throughout the lands. This “education” of superiority allows for the destroying and contamination of one's own source of sustenance, where individual and corporate profit is the first and utmost consideration. And consequential fallout is left for the living things to endure...That or left to die...This is also considered a holy act...After all their god will rapture the ‘deserving’ into the heavens and their life only begins after death... Meaning our mother earth is nothing more than a place of hell, A place to be scorned, used and abused.—perplexing how, ALL that that gives life and ALL that sustains life is aspersed throughout with the foulness of dishonoring language, thought and ‘holy’ water (pollutants of all nature) as lessons learned by the anointed ones and passed down are again being welded as we enter a new season. And number 46 simply being a‘Different’ leader... Sadly nothing new here.
I believe the path has been chosen. And it is Not the path of life.