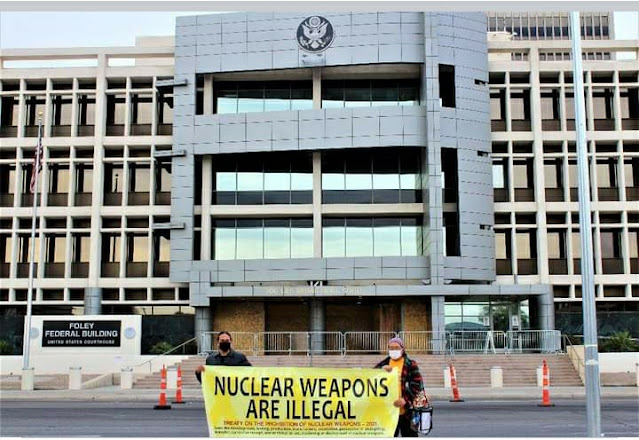 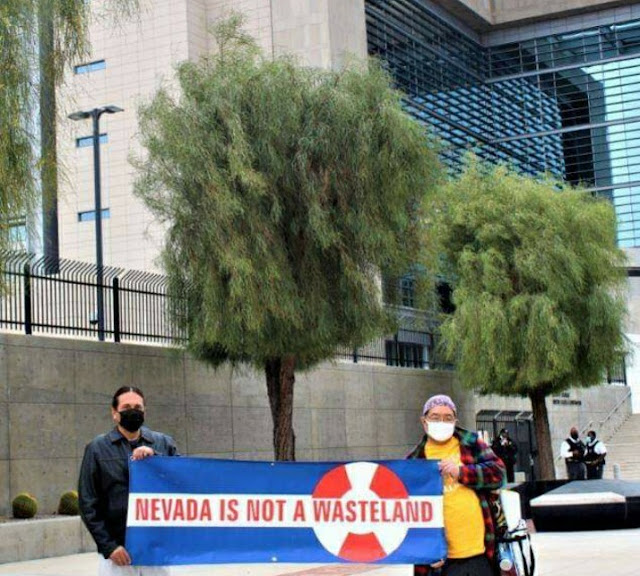 LAS VEGAS -- The Native Community Action Council is celebrating the Treaty on Prohibition of Nuclear Weapons entry into force by gathering in Las Vegas at the Federal Courthouse to hold banners affirming the entry into force of the treaty.

The treaty was approved by the 193-member U.N. General Assembly on July 7, 2017 by a vote of 122 in favor, the Netherlands opposed, and Singapore abstaining. Five nuclear powers and four other countries known or believed to possess nuclear weapons — India, Pakistan, North Korea, and Israel — boycotted negotiations and the vote on the treaty, along with many of their allies.

The Shoshone people view the treaty as a positive step leading to relief from over 900 nuclear weapons tests above, and below ground that released radiation upon the homelands of the Shoshone Nation of Indians.

“We are all down-winders,” stated Ian Zabarte, Secretary of the Native Community Action Council. Mr. Zabarte has worked for decades to end full-scale nuclear weapons testing conducted in secret and investigate health consequences of radiation exposure on his people and land.

His goal is to end the need for nuclear weapons, mitigate the impacts upon the Shoshone people and land and prevent Yucca Mountain from being developed as a high-level nuclear waste repository.

The Native Community Action Council is a party to Yucca Mountain licensing with the only ownership contention. After spending $15 billion dollars the Department of Energy cannot prove ownership to Yucca Mountain even with the Bureau of Land Management Master Title Plats because the Treaty of Ruby Valley is controlling under the US Constitution, Article 6, Section 2, treaty supremacy clause.

“Our relationship to the land and pure water of the Great Basin is our identity,” said Mr. Zabarte.

Mr. Zabarte was acquitted of rounding up Indian horses the US claims are “wild” under the definition of Congress in the Wild Horse and Burro Act of 1971.

“We acted out of necessity to protect our horses from the destruction of the range caused by nuclear weapons testing.”

The US Bureau of Land Management blames the Shoshone livestock for destroying the land.

Shoshone leaders were present at the Nevada National Security Site at 2:00 pm to hold banners and create awareness among test site workers that their work is illegal.