President Biden signed executive orders revoking the Keystone XL Pipeline permit, halting funding for the border wall, reviewing boundaries of Bears Ears, and issued a moratorium on oil and gas drilling in the Arctic National Wildlife Refuge.
Cheyenne River Lakota Chairman Harold Frazier in South Dakota immediately praised Biden for recognizing the danger the Keystone XL Pipeline poses to the land and people.
The pipeline would have transported dirty tar sands crude oil from Alberta, Canada,  endangering water sources throughout the heartland.
Chairman Frazier said it "was a dagger to our throats." (See full statement below.)
Oglala Sioux President Kevin Killer expressed thanks to Biden for protecting the water and land. (Read article at  KOTA )
Casey Camp-Horinek, Ponca elder, urged Biden to halt the Dakota Access Pipeline. "We have laid our bodies on the line," Horinek said today of the defense of the land and water, in a Letter to Biden, 'An Indigenous Perspective on Your Inauguration.'
President Biden's executive order revoking Keystone XL pipeline permit includes a review of Bears Ears boundaries in Utah, an  order restoring national monuments, and a moratorium on oil and gas drilling in the Arctic National Wildlife Refuge. (Read Executive order )
Funding for construction of the border wall was halted by Biden's executive order. During the Trump administration, burial places of Tohono O'odham were blown up with dynamite, endangered species' habitat was destroyed and precious water drained for border wall construction.
In the end, only destructive pieces of a border wall were built -- seen as a symbol of xenophobia and racism -- in areas of Native burial places and home to endangered species. (Read Executive Order Border Wall )
In the Oval Office late Wednesday, Biden signed an order requiring masks and social distancing on federal property, followed by an order to provide support to underserved communities,  USA Today reports.
Biden rejoined the Paris Agreement on climate change, a treaty the United States formally exited in November after Trump withdrew in 2017.
Biden also rejoined the World Health Organization.
Biden took executive action to reverse Trump's ban on travel from predominantly Muslim countries.
As Biden canceled the permit for the Keystone XL pipeline, Native people celebrated who have spent years defending their land and water. The pipeline would have moved oil from Canada to the Gulf of Mexico and threatened pristine drinking water throughout the heart of the United States.
With the goal of restoring and expanding national monuments, Biden signed an order to review the boundaries of Bears Ears in Utah, which Native people sought. Read more at ABC4 News and Salt Lake Tribune.
USA Today reports Biden also extended the pause on student loan payments and nationwide restrictions on evictions and disclosures.
The president signed an order launching a government-wide initiative directing every federal agency to review its state of racial equity and deliver an action plan within 200 days to address any disparities in policies and programs.
The Day One executive orders Biden signed include:
Rescinding Trump's 1776 Commission, a panel Trump established as a response to the New York Times' 1619 Project, a Pulitzer Prize-winning collection that focused on America's history with slavery.
Revoking Trump's plan to exclude noncitizens from the census.
Prohibiting workplace discrimination in the federal government based on sexual orientation and gender identity and directing federal agencies to ensure protections for LGBTQ people are included in anti-discrimination statutes.
Creating a COVID-19 response coordinator who will report directly to the president.
Revoking Trump's 2017 Interior Enforcement Executive Order, which broadened the categories of undocumented immigrants subject for removal, restarted the Secure Communities program and supported the federal 287(g) deportation program.
More action are planned over next 10 days.
More orders will come Thursday, Biden's first full day in office, when he signs several executive actions related to the COVID-19 crisis and reopening schools and businesses, Biden's chief of staff, Ron Klain, said in a memo outlining the first 10 days of the administration. That includes expanded testing, protections for workers and establishing public health standards.
Friday, Biden will direct his incoming Cabinet to "take immediate action to deliver economic relief" to working families struggling financially as a result of the pandemic, the memo said.
Other orders confirmed by Biden's team include revoking the ban on military service by transgender Americans and reversing the "Mexico City policy," which blocks federal funding for nongovernmental organizations that provide abortion services abroad.
Next week, Biden will sign orders to carry out his "Buy American" pledge, "advance equity and support communities of color and other underserved communities" and implement criminal justice changes.
He will sign additional executive actions related to climate change, expanding access to health care – particularly for low-income women and women of color – and on immigration and border policies, including the process of reuniting families separated at the U.S.-Mexican border.
Biden promised to introduce an immigration bill "immediately" upon taking office. It will include an eight-year pathway to citizenship for immigrants living in the USA without legal status, an expansion of refugee admissions and the use of new technology to patrol the border.
Perhaps no other early action will deliver a bigger statement symbolically than rejoining the Paris Agreement, which will show the world the United States is ready to work multilaterally again, a departure from the isolationist tendencies of Trump, experts said.
Read the full article at USA Today.
USA Today
Cheyenne River Chairman Harold Frazier's statement: 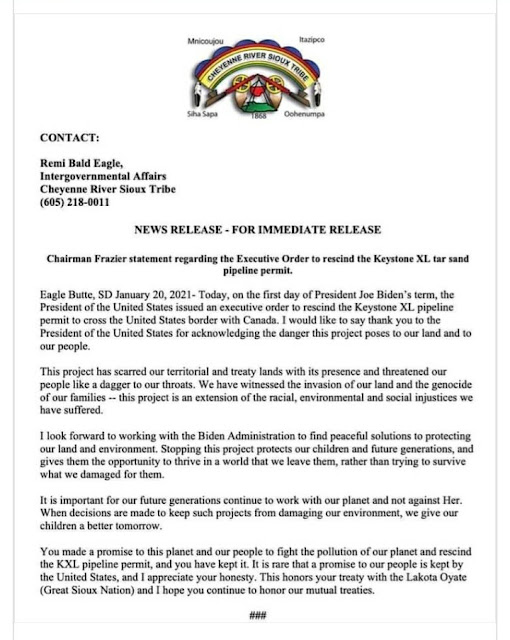 Aho and woohoo! Thanks for the articulate clarifications! Ditto for news of the lien that delays the transfer of Oak Flat to a foreign mining company.

Limlmtx Thank you, Brenda, for getting all the good news to us so quickly! I read it so fast I don't think I saw where the little children are going to be helped and reunited with their parents. I am sure it will happen and may take some doing to find all the families involve. All of the news so far from Biden almost brings tears of joy! Thank you, Klncutn Creator for hearing our prayers. Please keep this new administration safe and healthy.