Kumeyaay gathered Sunday on both sides of the border to hold a ceremony, and bring attention to the environmental and cultural damage done by the border wall construction.

Their communities have been cut through by the border wall, in what is known as San Diego County, California, and Baja California, Mexico. 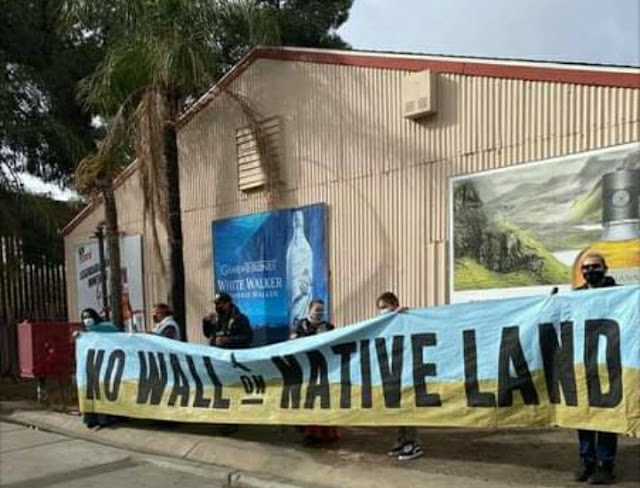 Responding to a National Call for Action, Kumeyaay elder Stan Rodriguez, Santa Ysabel of the Iipay Nation, described the destruction to sacred places by the border wall construction, and how the southern border has cut through Kumeyaay communities.
The message to President Biden was, "Halt border wall construction and repair the damage."
"Keep your word."
Rodriguez said Kumeyaay ancestral territory spans from the Pacific Ocean to the desert.
"We have been here since time immemorial, for thousands and thousands of years."
Kumeyaay have ancient villages where they once lived that are now under the Pacific Ocean, from the last ice age. Kumeyaay have fish traps that are in the desert, where there was once a large lake, he said.
"The Kumeyaay people are no stranger to climate change, and we are no stranger to pandemics," Rodriguez said.
Kumeyaay are now being denied access to their sacred places, and denied their right to practice their religion, guaranteed under the American Indian Religious Freedom Act, because of the border wall, he said.
All along the southern border, the Carrizo, Kickapoo, Yoeme, Tohono O'odham, and  Cocopah are struggling with encroachment and desecration of their sacred sites, he said.
Without consulting Kumeyaay, the border wall construction desecrated a sacred ceremonial area and a sacred hot springs used for healing, he said.
"We are not owners of this land, we are part of it."
Rodriguez said Kumeyaay from both sides of the border gathered for the prayer circle and sacred traditional songs on Sunday.
"We are not going to let that border stop us from being who we are."
Kumeyaay have a wealth of knowledge, a library of knowledge, gained from thousands of years of caring for their land. Kumeyaay cared for the land in a way to make it beautiful, using a system of agriculture with acorns.
"The Earth is our Mother."
"What happens when you don't care for your Mother?"
"She gets a fever, a fever to burn away the virus."
Listen to the full interview with Stan Rodriguez. The video is now on YouTube. Video by John Clark-Dvorak.
https://youtu.be/ANAGJUotb2M
In related news, border wall contractors continued border wall construction last week at numerous sites on the Arizona and Texas border, defying President Biden's executive order to halt border wall construction. It is documented in these photos and videos:
https://bsnorrell.blogspot.com/2021/01/border-wall-construction-continuing.html
Also see today's news coverage in Tecate, Mexico: Kumiai, en espanol, Tecate, Baja California, Mexico, hoy:
https://tecateinformativo.com/pueblo-kumiai-protesta-contra-el-muro-fronterizo/
at January 25, 2021