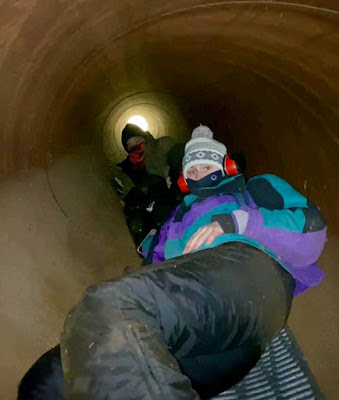 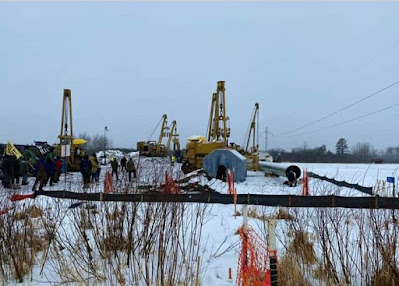 BACKUS, Minn. -- Thursday morning, water protectors locked to each other inside a Line 3 pipe segment, halting construction at an Enbridge worksite as dozens more held space.

The site is a few miles from a large Enbridge man camp operating in the township of Backus, Minnesota. Enbridge is working 24 hours per day at several worksites, as a pending injunction to halt work while tribally-led lawsuits are heard has yet to be decided.

According to several cultural site maps, numerous sacred and significant sites lie in the path of the Line 3 project.

Water Protector Abby Hornberger said, “After moving to Minnesota to attend college and study environmental science, I was excited to be in a place where’s people valued protecting the earth and finding a viable future. What I found, however, was a state that had formed “ambitious” climate goals yet endorsed one of the dirtiest fossil fuels, tar sands oil. I realized that indigenous ways of knowing and practicing harmony with the environment are continuously ignored. The Line 3 pipeline far outweighs all clean energy initiatives and progress being made in renewable energies. Line 3 will destroy Minnesota’s essential clean water resources for future generations and will ultimately drive us into climate doom. Education and spreading awareness is no longer enough to create meaningful change for me.”

Hornberger continued, “Enbridge’s last ditch effort to build fossil fuel infrastructure is killing people and the planet. I refuse to be complicit in settler colonialist practices, and feel that I have to put my body on the line to protect indigenous communities sovereignty and all of our futures. This is not just an issue relevant to some, it affects each of us on a deeper level that goes beyond our daily lives. It determines if we will have a livable future.”

Water Protector Andrew Lee said, “I’m here today to protect the treaties that my ancestors failed to uphold. I’ve learned over the course of this year that Tim Waltz isn’t going to protect us, the government of Minnesota isn’t going to protect us, and the federal government isn’t going to protect us. I believe it is my duty, as a colonizer and as a person with the privilege to do so, to put my body on the line to stop the Enbridge Corporation from building this pipeline. It breaks my heart and enrages me to see how these people are desecrating the earth and the lengths they will go to to leech every last dollar they can from its surface.” They continued, “But for as much as I’m here in anger and fear, I’m also here in love. Love for this planet, for my comrades, for the Native people who’ve been in this fight for over 500 years, and for all future generations of people who will inhabit this earth after we’re gone.

So I’m joining this fight. If you see this and are able, you should do the same. Love and lights <3”