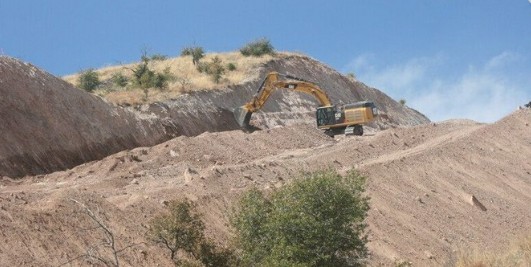 By Center for Biological Diversity

NOGALES, Ariz.— Video footage shared with the Center for Biological Diversity seems to show construction equipment leveling Arizona mountains in critical habitat for endangered jaguars, in an apparent violation of President Biden’s proclamation halting border wall construction. The footage was reportedly shot on Wednesday, Feb. 10, by members of the Tucson Samaritans, who shared it with the Center.

“These alarming videos seem to show construction crews destroying every acre of pristine wildlands they can lay their hands on, in what appears to be a blatant disregard of Biden’s order halting construction,” said Laiken Jordahl, borderlands campaigner at the Center. “The Biden administration should investigate this immediately and stop any construction that’s still occurring. Pausing work on the wall isn’t enough. The new administration must cancel these contracts for good and work with border communities and tribal nations to repair all that Trump destroyed.”

The president’s Jan. 20 executive order directed that work “on each construction project on the southern border wall” be paused “as soon as possible, but in no case later than seven days” from the date of the order.

This section of wall, west of Nogales, is a part of a larger 74-mile stretch being built through remote, mountainous terrain that includes the last remaining corridors jaguars use to move back and forth between the United States and Mexico. Many other animals use these remote areas to migrate across the landscape. A 2017 Center report identified 93 threatened and endangered species along the 2,000-mile border that would be harmed by Trump’s wall.

Beyond jeopardizing wildlife, endangered species and public lands, the U.S.-Mexico border wall is part of a larger strategy of ongoing border militarization that damages human rights, civil liberties, native lands, local businesses and international relations. The border wall impedes the natural migrations of people and wildlife that are essential to healthy diversity. 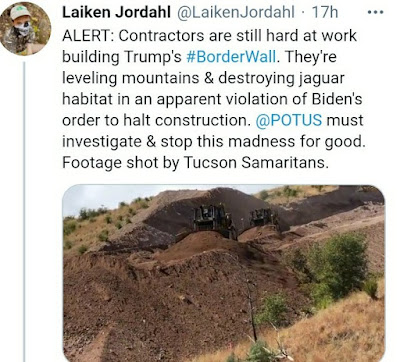 An excavator tears into the Pajarito Mountains in Arizona on February 10. Credit: Brian Best, Tucson Samaritans. Images are available for media use.

Here are a couple of links to information from Jan 21. Although I was under the impression this construction had been stopped, both these articles seem to leave some unanswered questions. https://www.borderreport.com/hot-topics/the-border-wall/border-wall-construction-goes-on-in-spite-of-biden-mandate-to-stop-it/ https://www.washingtonpost.com/national/biden-border-wall-executive-order/2021/01/20/5f472456-5b32-11eb-aaad-93988621dd28_story.html