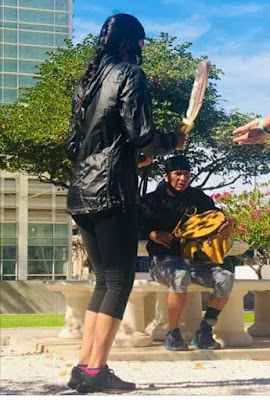 PHOENIX – In a riveting and emotional hearing in front of U.S. District Court Judge Steven Logan at the Federal Court in Phoenix, the Department of Justice attorney claimed that the destruction of Oak Flat, or Chi'chil Bildagoteel, was "not a substantial burden" even though it would prevent the Apache from practicing their religion.

After running the 70 miles from Oak Flat to the Courthouse, Dr. Wendsler Nosie and Naelyn Pike testified regarding the importance of Chi'chil Bildagoteel to the Apache.

Ms. Pike related the importance and the experience of the Coming of Age ceremony to the Apache.

Dr. Nosie told of the historic Apache use and power of Chi'chil Bildagoteel.  He also described his direct relationship to Mangas Colorado, a signer of the Treaty of 1852.

The treaty of 1852 promised that "the government of the United States shall" maintain Apache access to their historic lands "conducive to the prosperity and happiness of" the Apache, including Oak Flat.

Anthropologist Dr. John Welch testified that the Treaty which reserves Oak Flat for the Apache has never been amended and that Apache ownership of the area has never been surrendered.

"We will continue to pray for a positive outcome," said Dr. Nosie.  "The fate of Chi'chil Bildagoteel and our ability to practice our religion is at stake."

Dr. Nosie has been living for more than a year at Chi'chil Bildagoteel.

Judge Logan promised to issue a rule on February 12, 2021 whether Oak Flat will be given away to Rio Tinto/Resolution Copper without a trial.