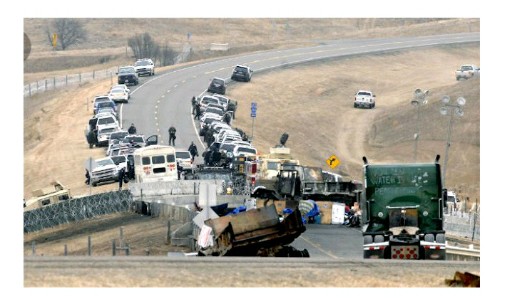 NEW YORK — ​Yesterday, ​​the American Civil Liberties Union (ACLU), together with its North Dakota affiliate (ACLU of ND), filed an ​amicus curiae brief​in support of the ​Thunderhawk ​plaintiffs in the U.S. Court of Appeals for the Eighth Circuit. ​Amicus Curiae​or “friend of the court” briefs are filed by third parties with an interest in the litigation, and can carry significant weight with the court when submitted by organizations with expertise in an issue salient to the case—such as with the ACLU and free speech.

The ACLU brief centers on the key issue in this appeal, whether the ​Thunderhawk plaintiffs have any constitutional right to speak along the public road in question. As the ACLU brief emphasizes, courts across the country have long recognized that roads are “quintessential traditional public forums,” having served as important sites of protest at key points in American history, “from the civil rights marches and anti-war demonstrations of the 1960s and 70s to more recent protests, including marches in opposition to abortion, in support of rural healthcare, and against police brutality.” This rule is, the ACLU brief makes clear, a categorical rule--and for good reason. Forcing courts to undertake a “particularized inquiry for every road or sidewalk,” as the defendants in this case suggest the Eighth Circuit should do, “would likely chill protest,” and is contrary to the Supreme Court’s clear dictate that “​all​public streets are held in the public trust and are properly considered traditional public fora.”

In their brief, the ACLU gives detailed historical examples of the crucial role that various roads and streets have played in political protest. In the 1965 Voting Rights March, “thousands of voting rights activists [made] a 54-mile-long journey [over] covered bridges, sidewalks, and the highway,” passing through “rural and urban areas, walking along everything from a narrow dirt road to a high-speed highway.” In 1966, 15,000 people joined civil rights icons Martin Luther King Jr. and Stokely Carmichael in the Meredith March Against Fear, “crossing dirt roads, densely packed Black neighborhoods, and interstate highways.” During the Vietnam War years, hundreds of anti-war demonstrations took place on the streets of rural towns and major cities. More recently, the ACLU points out, protestors from across the political spectrum, from those taking pro-life pilgrimages to Black Lives Matter protestors in the aftermath of the killing of George Floyd, have used various rural roads and highways as sites of protest. 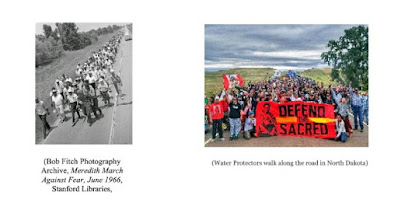 As the photos in the ACLU brief (left) show, and as the photos of the Standing Rock protests demonstrate (right), roads are quintessential public forums for Free Speech.

The ​Thunderhawk ​litigation grows out of the #NoDAPL movement in 2016-2017 when tens of thousands of Water Protectors gathered on the northern border of the Standing Rock Reservation to support the Standing Rock Sioux Tribe’s resistance to the Dakota Access Pipeline. The lawsuit centers around law enforcement’s months-long closure of a nine-mile stretch of the region’s primary public right of way, which effectively severed the Tribe and its supporters from Bismarck, the state capital and the location of the nearest airport, shopping, population center, and major hospital. 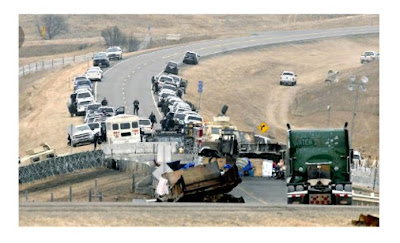 The plaintiffs in this case, Cissy Thunderhawk, Wašté Win Young, the Reverend John Floberg, and José Zhagñay are, respectively, a small-business owner, a former Historic Preservation Officer of the Standing Rock Sioux Tribe, Standing Rock’s Episcopalian Minister, and a school volunteer. The plaintiffs, and the class they seek to represent, allege violations of their constitutional rights. Through the suit, the plaintiffs hope to recover damages for the substantial harms inflicted on the community and movement by this unnecessary and overbroad road closure.

The litigation forms part of the ​Practical Engagements​ of the ​Initiative for a Just Society at the ​Columbia Center for Contemporary Critical Thought​. In 2018, the Center organized a ​seminar on Standing Rock​that explored many of the legal issues and civil rights violations associated with the Standing Rock protest movement.

The ACLU amicus brief can be found here: https://cccct.law.columbia.edu/sites/default/files/content/ACLU%20Amicus%20Brief.pdf