MNN. 3 oct. 2021. In politics leaders are supposed to lead by example. Trudeau’s stroll on the beach during the first Indigenous “Truth and Reconciliation Day” promotes the horrors of 150 years of genocide. We sense that Trudeau gave us the finger and that genocide will continue. His remedy is for us to reconcile with the murderers, become Canadian citizens to complete the genocide of us and our culture. Remaining onkwehonweh of our homeland, turtle island, is our protection. 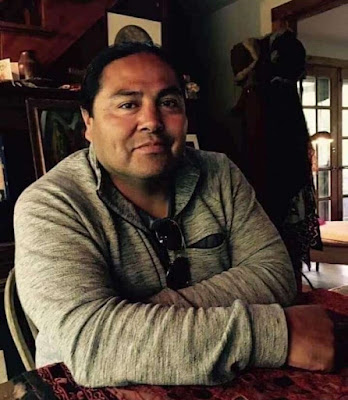 Paiute Shoshone Myron Dewey killed in car collision
The kill switch and the bombing range: Myron Dewey's livestream and the Wikileaks exposures
By Brenda Norrell
Censored News
Sept. 27, 2021
Updated Oct. 5, 2021
French translation by Christine Prat
https://chrisp.lautre.net/wpblog/?p=6696
While Paiute Shoshone Myron Dewey livestreamed from the bombing range of his childhood homeland in Yomba, in the Nevada desert on Saturday, September 25 -- the day before he died in a car collision on Sunday -- people around the world were reading of another exposure of the military in the Nevada desert.
It was the fact that Wikileaks founder Julian Assange was targeted for kidnapping, and possibly assassination, by the CIA. Wikileaks exposed the fact that drone pilots at Creech Airforce Base in the Nevada desert had their fingers on the kill trigger, and were assassinating people around the world, without trial or jury, including children and news reporters, in reckless assassinations based on failed military intelligence.
Meanwhile, Myron was exposing the destruction from the Navy's bombing range in his homeland. In the ancestral land of the Paiute and Shoshone, in what is today known as Nevada, there are the scars, the poisons, the death trail, of the Nuclear Test Site, widespread radiation and cancer, and the reckless bombing practices and military games destroying sacred places.
Read more »
at October 04, 2021 11 comments: