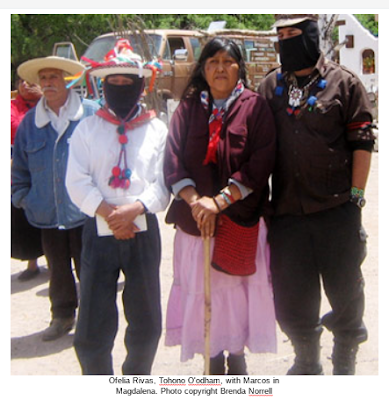 Marcos' words when he met with us in Magdalena, Sonora, just south of Tucson

Remembering Marcos' words, Ofelia Rivas, Tohono O'odham, said today, "A powerful statement by the Otra Compana and an honor to welcome the Zapatistas elders and spokespeople to O'odham lands, in what is now called Sonora."

What happened is that in our land, our chiefs – I am a Subcomandante, because I am not the chief – my chiefs are men and women like Doña Ofelia, like Don José, 100 percent indigenous. And it fell on me – together with other compañeros – to do other work.

We were already dead and we were called upon to become warriors, according to our legend. And as we were dead, we became what we are: shadows. And in a strict sense we are that: “shadow’s warriors or warriors of the shadows.”

‘I could go missing tomorrow’


A Navajo woman is walking from Arizona to Washington, D.C., as a call to action for her aunt and thousands of other missing or murdered Indigenous people.

STORY AND PHOTOS BY
Michael Benanav|
Searchlight New Mexico
July 7, 2022
In the wee hours of June 15, 2021, Ella Mae Begay vanished from her home on the Navajo Nation, near Sweetwater, Arizona. She was 62 years old. Within days of Begay’s disappearance, a person of interest was named in the case and local search parties were scouring the roadsides and arroyos near Sweetwater. But more than a year into an investigation by Navajo law enforcement and the FBI, no arrests have been made. Begay still has not been found.
Concerned that she would become yet another overlooked statistic amid a nationwide crisis of violence endured by Indigenous families, one of her nieces took to the streets. Literally. Last year, Seraphine Warren walked 120 miles from Sweetwater to Window Rock to try to get some answers, and some help, from Navajo Nation President Jonathan Nez and the tribal council.
Read the article at Searchlight New Mexico:
https://searchlightnm.org/i-could-go-missing-tomorrow/
at July 08, 2022 No comments: 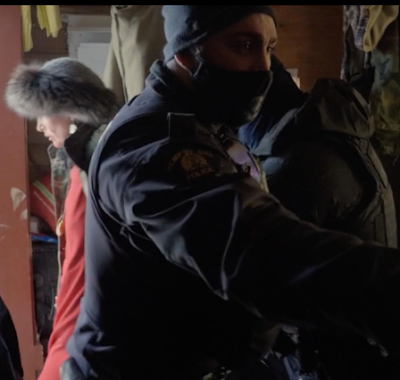