Exposing the Genocide: Torture Experiments, Trafficking and Mining
For the Children Who Never Came Home
By Brenda Norrell
Censored News

Heart breaking, and gut wrenching, we are sharing the stories of the children who never came home.
The brainwashing, torture, trafficking, and drugging of children by the so-called elite -- politicians, Hollywood, and (disputed) royalty -- and CIA -- are being exposed in the Mohawk Mothers court case; Epstein articles; and the case of Tokata Iron Eyes, Lakota, daughter of Sara Jumping Eagle, pediatrician, and Chase Iron Eyes, attorney.
Actor Ezra Miller remains in hiding with Tokata and police are unable to serve protective orders and warrants.
The Genocide
At the same time, many leaders of the movements now have COVID. On the northern border, Kanahus with the Tiny House Warriors was arrested at the border, charged and released.

The Mohawk Mothers continue their case in Ottawa Supreme Court, exposing the torture experiments of Canada and the U.S. CIA in the MK Ultra mind control experiments, the role of the band councils in genocide, and the search for the unmarked graves of the little ones, the children who never came home.

Mohawk Mothers told Aljazeera of the children who never came home from McGill University medical center, "I personally know of somebody who was taken there because he was 'unruly.'"
"They did a lobotomy on him and sent him back. And for 40 years, his family took care of him."


Canada and the U.S. CIA conducted MKUltra torture experiments at McGill University's Allan Memorial Institute in Montreal, which is documented in court cases and a Senate hearing. (See U.S. Senate report below.)

Mohawk Mothers said, "The band council ran the reservations and helped the government to carry out the genocide. They helped select the children that were sent to these schools and were never seen again."
Mohawk Mothers are demanding in Quebec Superior Court the right to search for graves on the grounds of McGill University.

The CIA set up fake foundations to fund the torture experiments.

In research supporting the Mohawk Mothers court case, The McGill Tribune exposes the fact that the "CIA created research foundations, such as the Human Ecology Fund, to act as fronts for funnelling MK ULTRA research funds.The CIA then worked through such organizations to target researchers with projects that were of interest to them in developing techniques of interrogation or human behavior control."

Native children were stolen from their families and incarcerated in residential prison schools by Canada, the Catholic Church, and other churches.

McGill was not the only university involved in the MK Ultra torture and brain control experiments. Where are the others? There were 80 institutions carrying out these torture experiments, including universities.

The research involved deprogramming minds after the Korean War, including repetitive electric shocks.
Now, the search begins for unmarked graves at Indian boarding schools in the United States. Native children died of starvation, disease, medical experiments, rape, torture and murder.
Mining: Fake Green Solution of Electric Vehicles
Meanwhile there was another form of genocide underway, in Canada, and globally.
At the world mining conference in Toronto in June, there were four Natives who have joined the boards of directors of mining corporations. Other Native leaders spoke and some supported mining.
In its lust for land, Canadian mining companies are buying their way in, and using the fake green solution of electric vehicles, which requires increased mining of lithium and other minerals, which is devastating to the water, land, and all living things.
Rio Tinto, owner of Resolution Copper, the corporation targeting Apaches sacred Oak Flat for copper mining, discussed its own sexual assaults and abuses at its mines in Australia and South Africa.
Exposing non-profits
At the same time, Censored News is exposing the tax documents of non-profits in Indian country, many of the CEOs are non-Indians who are deceiving the public, and skimming the money.
Exploiting photos of Native children, traditional foods and other cultural ways, these non-profits, operated by non-Indians, use social media for self promotion and to deceive, while giving themselves lavish salaries.
Other executive directors removed the traditional Native elders -- the founders of the movements -- and replaced them with their own boards. They are siphoning off the money for their own salary and expense accounts, and money for family members.
While millions of dollars quietly pour into Native American non-profits from foundation grants, Natives living on the land, for which the funds are intended, receive little if any.

When Mohawk Mothers first exposed the torture experiments of Canada and the US CIA at McGill in Montreal, many people did not believe them. Now, with their court case in Ottawa Supreme Court underway, and the search for unmarked graves of their children, The McGill Tribune exposes the U.S. Senate hearing on MK Ultra. It states clearly that Native Americans were used, and others, without their knowledge, in mind control and drug experiments. The U.S. Senate reports states, "The Central Intelligence Agency drugged American citizens without their knowledge or consent. It used university facilities and personnel without their knowledge. It funded leading researchers, often without their knowledge." There were 89 institutions involved, including universities, and McGill University's Allan Memorial Institute in its medical college was one of them.

The U.S. Senate report detailed the experiments on Native Americans, and others, without their knowledge -- including drugs, brain control, gasses, pathogens, and electro-shock, in university research. This comes as Mohawk Mothers continue their case in Ottawa Supreme Court, and the search for the children who never came home. U.S. Senate hearing on MK Ultra torture experiments.
The U.S. Senate hearing on MK Ultra torture experiments reveals victims were used in 44 universities, 12 hospitals, three prisons, and other sites. The Senate report states sites included San Francisco and New York.
The Senate report says that the CIA secretly funded the torture research through a fake foundation, so the money could not be easily traced, to the Society for the Investigation of Human Ecology and the Human Ecology Fund.
Wikipedia describes it this way, "The Human Ecology Fund was a CIA funded operation through the Cornell University College of Human Ecology Society for the Investigation of Human Ecology to support covert research on brainwashing. It was also connected to research in the area of Anthropology.[1]"
The Senate report states, "We also know now that some unwitting testing took place on criminal sexual psychopaths confined at a State hospital, and that additionally research was done on a knockout or K drug in parallel with research to develop painkillers for cancer patients." 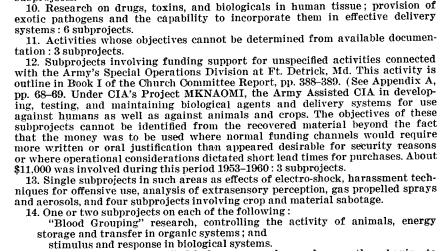 Copyright Brenda Norrell, Censored News. No portion may be used without written permission.