Jacob Johns, Akimel O'otham and Hopi, and Big Wind Carpenter, Northern Arapaho,  were among four climate activists whose credentials were removed after their war cry and banner drop during President Biden's address.
Johns told the Guardian, “We’ve been locked out, our voices silenced,” said Johns, 39, a Washington state-based community organizer. “The climate collapse is coming, we are literally fighting for our lives. If we’re not allowed to advocate for our future, who will? It’s shameful."
”The world is falling apart but inside the destruction, there is creation and a healthy liveable future, and we try to bring this energy to the chaotic negotiations. International spaces have been historically off-limits to indigenous peoples, but different perspectives can hold a lot of power. I’ve been denied that basic right.”
Johns raised his own funds to attend COP27 and was then locked out
Big Wind, Northern Arapaho, told the Guardian, “This is a clear example of radical Indigenous people and youth being silenced, we’re muted when we try to express our frustration in these spaces. It shows the UN’s true colors.”
“We need to accelerate the transition but that’s not going to happen by partnering with big polluters like Amazon and PepsiCo, and so we needed to call that out,” he said, in reference to an announcement earlier this week by US climate envoy John Kerry, the Bezos Earth Fund, PepsiCo and others about plans to design an energy transition accelerator.
https://www.theguardian.com/environment/2022/nov/18/shameful-un-silencing-indigenous-voices-say-banned-cop27-activists
Previous post at Censored News 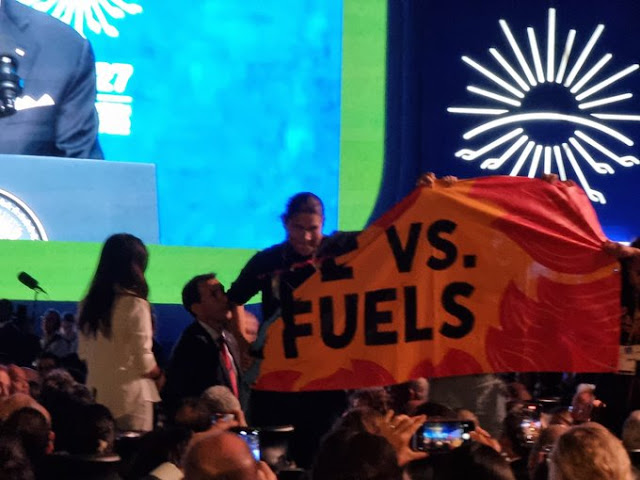 Northern Arapaho Big Wind interrupts Biden's talk at COP27, says no time left for false solutions.Today: Biden's speech was interrupted before the suits moved in, as Egypt forbids protest in the Blue Zone at COP27.

The Guardian reports: Protesters interrupt the US president's speech by Nina Lakhani:
"Four protesters holding a banner which read ‘people vs fossils’ interrupted the speech of Joe Biden, the US president, to Cop27.

A new Climate Trace map shows the places releasing the most dangerous greenhouse and toxic emissions in the world. In the Southwest, the Permian oil and gas fields, on the New Mexico and Texas border, tops the list, followed by Los Angeles and other urban areas.

The most toxic polluters in the world include the Four Corners Power Plant, San Juan Coal Mine, and Navajo Coal Mine on the Navajo Nation in northwest New Mexico, near Farmington, N.M., according to Climate Trace data just released at COP27 in Egypt.
Read more »
at November 11, 2022 No comments:

Risking it All at the UN Climate Summit in Egypt: Protesters Take to the Streets 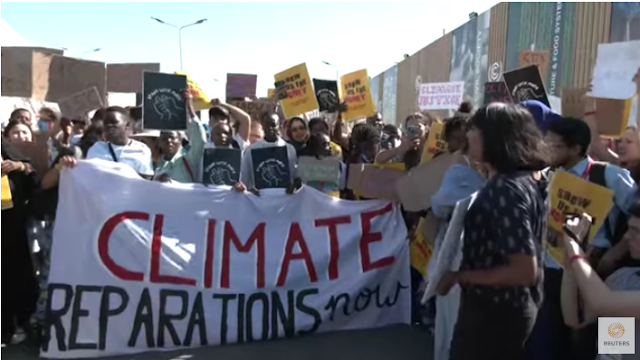 Risking it all today at COP27 in Egypt. Women and youths from India, Kenya and around the world lead protests forbidden by Egypt. "The People United Will Never Be Defeated!" rang out the voices in the street, echoing the sound of the Zapatistas.

"What do we want? Climate Justice. When do we want it? Now! What will we do if we don't get it? Shut it Down!"