Buffy Sainte Marie: Uranium, an interview and a photograph 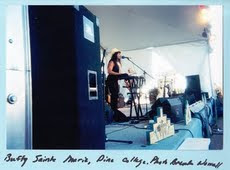 By Brenda Norrell, copyright
Censored News
http://www.bsnorrell.blogspot.com
It is amazing what can happen when one finds and publishes a photograph from years ago. The photograph is of Buffy Sainte Marie singing at Dine' College. It was taken the day I interviewed Buffy in 1999. She told me about being censored out of the music business by Lyndon Johnson because of her song "Universal Soldier" during the Vietnam War. She spoke of the personal hardship it brought, but also of what happened to others, including Anna Mae Aquash.
Buffy spoke of the occupation of Wounded Knee and the shoot-out with FBI agents at the Jumping Bull residence at Pine Ridge June 26, 1975.
"That is where Leonard Peltier's troubles began," Buffy said. Buffy said that few people recount the true history of what happened on that day in history.
"Who recalls that on that day one-eighth of the reservation was transferred in secret -- on that day. It was the part containing uranium. That is what never seems to be remembered," Buffy said.
The interview remained censored for seven years by Indian Country Today, where I served as a staff reporter for the majority of those years. When Buffy's interview was finally published by ICT, one portion still remained censored.
It was the portion about Anna Mae Aquash's death in relation to the fact that Pine Ridge was targeted for uranium mining at that time.
Tonight, I received an e-mail message pointing out that on June 26, 1975 Oglala Sioux Chairman and GOON squad leader Dickie Wilson was in Washington signing away one-eighth of Lakota land for uranium mining.
It was the same day that two young FBI agents were sent into the Jumping Bull camp. It is the reason that Leonard Peltier has spent his life in prison.
So, tonight I searched for more about the uranium mining that Pine Ridge was targeted for.
The e-mail came from Jack Cohen-Joppa at Nuclear Resister. "Thanks for posting your interview with Buffy Sainte Marie. I was taken by this comment of hers, particularly: 'Who recalls that on that day one-eighth of the reservation was transferred in secret -- on that day. It was the part containing uranium. That is what never seems to be remembered.' It is my recollection of this fact (learned from reading Akwesasne Notes and Rex Weyler's writing about Peltier, I think) that led us to include Leonard Peltier on the Nuclear Resister's 'Inside & Out' list for nearly the entire time we've been publishing (since issue #3, March 1981.) We wrote '... On that same day, June 26, 1975, Pine Ridge Tribal Chairman Dickie Wilson was in Washington DC, illegally signing away one-eighth of the reservation's lands to the Department of Interior. There is uranium on this land...'" http://nuclearresister.org/
On the web, the John Graham website states: " .. the US had an eye on developing uranium mining on a portion of the sacred Black Hills, an area known as Sheep Mountain. This area has proven to be one of the richest in uranium deposits in the US. The FBI implemented their counterintellegence operation in Pine Ridge, in order to weaken and destroy the urban Indian movement, and to subjugate the traditional Lakotas for once and for all."
http://www.grahamdefense.org/200411investigatethefeds.htm
Posted on Russell Means' Lakotah Republic website: "In 1975, with his control of the Pine Ridge Reservation in South Dakota secured by force, Tribal President Wilson set about ceding uranium-rich areas of the sacred Black Hills to the federal government. AIM assisted in protecting Pine Ridge’s traditional families from the constant onslaught of violence, which culminated in the AIM occupation and government siege of Wounded Knee in the Spring of 1973. From 1973 to 1976, the people of Pine Ridge lived under the 'Reign of Terror'—more than 76 Natives, mainly traditional Lakotah and AIM members, were murdered, primarily by Wilson’s goons, a term coined by the elderly women who protested against them. Later, in a perverse play on words, the goons called themselves, 'Guardians of the Oglala Nation' (GOONs)."
Then, I remembered being at Sheep Mountain. We climbed and watched for helicopters in the night, as Lakotas protected the remains of the Ghost Dancers at the Stronghold in 2002. In the dark night, the sky filled with lightning and thunder. All Creation was there at that moment.
Buffy's lyrics:
"My girlfriend Annie Mae talked about uranium
Her head was filled with bullets and her body dumped
The FBI cut off her hands and told us she'd died of Exposure…
"Bury my heart at Wounded Knee
Deep in the Earth
Cover me with pretty lies
bury my heart at Wounded Knee."

Finally, I do not know who killed Anna Mae Aquash. But I do know that two separate groups of witnesses, all local Lakotas on Pine Ridge, said they were there when it happened at Oglala. Many never came forward out of fear. But they do identify the same person as the killer. That person is not any of the men, including Arlo Looking Cloud now in prison for this crime, who have been charged.
Lakota lands and Indian country are once again targeted for uranium mining.
Buffy has just released a new CD, "Running for the Drum."
The uncensored interview with Buffy Sainte Marie:http://bsnorrell.tripod.com/id99.html
WWII tests exposed Lakotas in Badlands during genocidal studies using uranium
In situ leach uranium mining is the new form of genocide in Indian country:
http://www.rense.com/general84/occd.htm
Updated reference: Uranium on Pine Ridge
"... Meanwhile, on Pine Ridge, South Dakota, a storm was gathering. In 1973, the federally installed regime of tribal president Richard 'Dickie' Wilson was attempting to transfer the barren but uranium-laden northwestern eighth of the reservation -- an area known as the Gunnery Range -- to the Interior Department. As his reward, Wilson anticipated U.S. support in establishing what amounted to his own feudal dynasty.
When traditional Oglalas resisted his attempt to seize their land, Wilson created a goon squad, paid with Bureau of Indian Affairs funds and largely composed of off-duty Bureau cops. The U.S. government dispatched a sixty-member SWAT unit of federal marshals from Washington to reinforce him. When the marshals came in, traditional Oglalas requested direct assistance from the American Indian Movement. This brought about the movement's occupation of Wounded Knee."
--":Like a Hurricane -- The American Indian Movement: From Alcatraz to Wounded Knee -- a book review," by Ward Churchill, published in The Progressive
http://findarticles.com/p/articles/mi_m1295/is_n6_v61/ai_19482846/
Posted by Censored News, publisher Brenda Norrell at September 02, 2009