Zapatistas and Vicam Yaquis: In Defense of Water 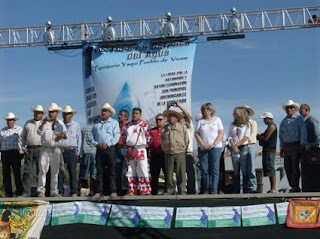 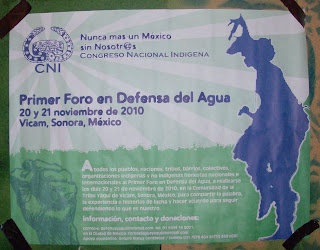 Photos above: Copyright Ofelia Rivas, O'odham. (Top) The Defense of the Water in Vicam Pueblo, Sonora, with Yaqui authorities, CNI representatives and organizers of the event.

At the Indigenous National Congress on Yaqui's Vicam Pueblo, Zapatistas are the Stronghold

By Brenda Norrell
Censored News
http://www.bsnorrell.blogspot.com
Photo: Ofelia Rivas at Bolivia Climate Summit/Copyright Ben Powless
VICAM PUEBLO, Sonora, Mexico -- The Zapatistas joined Indigenous Peoples from throughout Mexico at the Yaquis’ Vicam Pueblo in Sonora, Mexico, for the National Indigenous Congress. With the urgent message, “In Defense of Water,” Indigenous Peoples united in the struggle for autonomy and protection of Mother Earth.

Ofelia Rivas, founder of the O’odham Voice Against the Wall from the US/Mexico border region, was a member of the O’odham traditional delegation. Zapatista Comandantes from Chiapas joined Indigenous from Michoacán, Veracruz, Oaxaca and throughout Mexico.

Rivas said O’odham went to Vicam Pueblo as members of the National Indigenous Congress, Nov. 20-21, to support the people in defense of water and to discuss land, water, autonomy and the impacts of bad government.

O’odham also brought their message. In northern Sonora, a road is being constructed through O’odham land, which O’odham never gave consent for. O'odham did not give consent for the use of their water. Both their fresh lagoons and the Sea of Cortez, as non-O‘odham refer to it, are impacted by this new development.

She said during the Congress the people created a strong Declaration from the National Indigenous Congress and the Yaqui Peoples. While there, Yaqui shared the story of their water, which originates in the Sierra Madres. The precious water of Yaquis is now targeted by the Mexican government, which plans to build an aqueduct to divert it.

“Even in Mexico, the treaties with the Yaquis have never been honored,” Rivas said, pointing out that both Mexico and the United States have failed to honor Indian treaties.

Rivas said Mexico’s new project would further divert water that Yaquis use for agriculture and survival. As a result, Yaquis have filed a lawsuit in Obregon against Mexico to regain their water rights.

Rivas said traveling in Mexico means enduring checkpoints and always wondering whether one would make it to their destination. (The Rio Yaqui pueblos are located about an eight hour drive south of the US/Mexico border.)

While camping in Vicam Pueblo for three days, O’odham were honored to observe the strong Yaqui culture and ceremonies. Rivas urged support for the Yaquis to halt the systematic oppression, which will diminish their way of life. “They need the support of all people.”

“The government is dividing the people to fight amongst each another.”

With increased removal for their homelands by the government of Mexico, Yaqui and other Indigenous Peoples are now faced with displacement and separation from their communities, long known as one of the first steps in the genocide of peoples.

Rivas said Mexico is removing Indian people from their territories, while claiming that new programs will end their poverty with subsistence. Meanwhile, the killing continues.

“They are still killing us, Indigenous Peoples, throughout Mexico.”

Reflecting on the role of the Zapatistas, she said, “The uprising of the people has been the Stronghold.”

“The Zapatistas are the Stronghold for us Indigenous Peoples. They were pushed to the limit, where they said ‘OK, enough is enough! We are not going to let them take our lands, take our way of life, take our food, take our culture and exploit who we are as people.’”

“We’ve existed for thousands of years in our own systems. It is our way of life. We governed ourselves.”

“This bad government is trying to dismantle that and divide the people.”

In Vicam, O’odham described the militarization of their homeland, Tohono O’odham land on the US/Mexico border.

“Every other day the helicopter comes at night, spotlights the homes and goes back and forth.” No one explains to the people what the Border Patrol is doing, working at night in the desert with heavy machinery. For O’odham who gather firewood or venture out at night, asking questions of the Border Patrol means risking one’s life, detainment or harassment.

Rivas said she will carry from Cochabamba to Cancun the strength of the people. She will also carry the hope of the people in the United Nations, that it will work for real change. She said governments must stop denying global warming and set standards to decrease emissions, in order “to halt the contamination of the air we breathe and the water we drink.”

“The huge governments, developed nations, need to be responsible.”

Rivas encouraged Indigenous Peoples to remain centered in their traditions.

“We need to return to our ceremonial way of life, return to our prayers and start really concentrating on the well being of Mother Earth, which is how we survived these thousands and thousands of years as Indigenous Peoples.”

“We need to go back to that and for people to realize that we have not disappeared off the land. We are still here.”

“We need to survive through Mother Earth and be responsible. Protect Mother Earth in any way you can,” she said, urging simple acts like not buying throwaway plastics.

“We need to remember to return to those roots. It will really make a change in our lives.”
Rivas can be contacted at the O’odham Solidarity Project. Please consider donating to assist with Ofelia Rivas' room costs for the UN Climate Summit in Cancun:
http://www.solidarity-project.org/
Listen to Ofelia Rivas' interview on this gathering of the National Indigenous Congress on the Defense of Water.
http://www.blogtalkradio.com/brenda-norrell
Read Yaquis statement: In Defense of Water
http://censored-news.blogspot.com/2010/11/zapatistas-yaqui-in-defense-of-wateral.html