AIM Women's Leadership: Infiltration and stalking by US agents 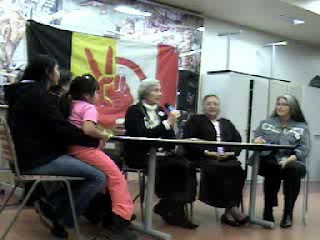 Women in the American Indian Movement share the stories of their lives
By Brenda Norrell
Censored News
http://www.bsnorrell.blogspot.com
SAN FRANCISCO -- Women in the American Indian Movement shared stories of lives lived with great courage, as federal agents stalked them and attempted to intimidate them, during the AIM International Conference this week.
The AIM Women’s Leadership panel brought together five AIM women to share their life stories. Anne Begay, Navajo, was among them. Begay is the mother of Kathy Peltier, the daughter of Leonard Peltier.
Begay spoke of her Dine’ family, a medicine family of men and women medicine people, who provided her with a childhood of structure, rich with history and culture.
After returning from the Longest Walk in 1978, Begay took her daughter Kathy to the park one day. Her daughter was about two years old at the time.
“This gentleman sat down next to me, with shiny shoes.”
He began to question her.
“Who’s her father?”
“None of your business,” Begay told him. He persisted with his questions and referred to the murder of Anna Mae Aquash.
He said, “Well, we know who you are. And if you’re smart, you’ll know what we did to Anna Mae can happen to your daughter too.”
“So, for all those years, it has been terrifying,“ Begay said, “to know that they can do that to my daughter.”
Speaking on the panel, Yvonne Swan, Colville from Washington State, spoke of being under government surveillance in the 1970s, because Leonard Peltier was her friend, and Bill Kunstler was her lawyer.
Swan spoke of learning to become aware of the men “with shiny shoes,” and men in suits, parked in unmarked cars. She trained her children to watch for these men, and once her son was grabbed by one of them, but was able to get away.
During her fight against corporate mining, she also watched for those federal agents that stalked members of the American Indian Movement.
“The government is merely a screen for the rich corporations,” Swan said. “They have the money to buy people off, they have the money to send people in to disrupt.
“But don’t ever underestimate the power of the people.”
Opening the panel discussion, Swan said the voices on the panel were coming from the hearts and spirits of the women.
“We’re survivors of abuse as women, as is Mother Earth, as is Grandmother Moon.”
Speaking of the importance of the American Indian Movement, Swan said she takes her actions seriously and holds herself accountable.
“We’re caretakers, we are up against the destroyers.”
“We are told to not take more than we need, because there are future generations that are coming that will be hungry.”
Swan pointed out that the Six Nations model of governance became the model for the US Bill of Rights. However, the US removed the aspects of the Six Nations governance that gave US women power and leadership. Ultimately, the US tortured and imprisoned women in the US as they fought for their right to vote.
Swan also pointed out the role of the Pope that resulted in American Indians being called “Savages.”
Madonna Thunderhawk, Lakota, said the struggles are intergenerational, the struggles for the “land, water, our people, the children.”
“The work continues, the struggle continues.”
Thunderhawk said she has continued to struggle since the 1960s in South Dakota, because this is what the movement taught her.
“I learned not to just sit back and complain.”
Thunderhawk said she appreciated seeing the youths present at the conference, and that Clyde Bellecourt’s talks always fire her up.
Corine Fairbanks of Santa Barbara, Calif., AIM, spoke of watching out for personal egos and those on Facebook who pose as traditional Indians, but are actually New Agers. Fairbanks also spoke of disruptions, with people carrying out the work of federal agents by spreading negative comments.
Speaking on infiltration, Fairbanks pointed out that even small groups of peace activities are targeted for infiltration by US agents.
Morning Star Gali, Pit River, born in the AIM Oakland house, said organizing within the movement has been an honor.
“For me, the movement was always grounded in a place of spirituality and love, that was the movement I was raised in.”
Morning Star spoke of bullying and abuse. She encouraged women to support one another.
“We’re survivors, we’re survivors of rape, we’re survivors of abuse.”
.
Watch this webcast, recorded live by Earthcycles. Women's panel begins at time: 1:54:00 on this video:
http://www.ustream.tv/recorded/11046674
Read about the case that led to Yvonne Swan Wanrow becoming a hero for women and Indian rights, in a case involving the sexual abuse of children:
http://en.wikipedia.org/wiki/Yvonne_Wanrow

It's always a sacrifice to speak up and stand up for what is right.

My question has always been, how do we learn to stand together in unison without hostility. How do we heal as indigenous people so that we live healthier.