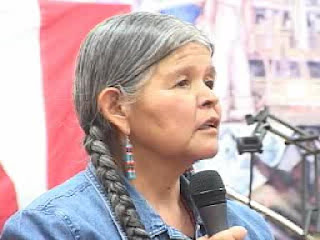 
SAN FRANCISCO -- Jean Whitehorse, Navajo, endured the US government’s boarding schools, relocation and sterilization. Today, she says the BIA unwittingly gave her the best education that money could buy; not by giving her job training in the San Francisco area, but by placing her near the Occupation of Alcatraz.
At the age of 19, it was the right time and the right place for Whitehorse to learn who she was as an American Indian.
Speaking at the 42nd Anniversary of the American Indian Movement, during the weeklong conference, Whitehorse described her own journey, beginning with the exile of her people, the Navajo or Dine’.
Whitehorse said when Navajos were forced on the Longest Walk, they were removed from their homeland for four years. The government returned Navajos to only ten percent of their land, and only did so because the government felt the land was worthless. Later, oil, gas, uranium and coal were discovered on Navajoland.
Whitehorse, from the Eastern Agency of New Mexico on the Navajo Nation, said she grew up with abuse in boarding schools. The “Board of Education was the ruler. It was to punish you. My whole boarding school experience was all about abuse.”
She said in those days, parents were not able to defend their children. “Back then, our mothers and fathers weren’t there to talk for us. They weren’t there to protect us.”
Next came relocation. Whitehorse was sent to the Bay area to learn a vocation, then was pressured to stay and work. During this time, she went to Alcatraz, two months after the initial takeover in 1969. This came at the time of Black Panthers and protests of the Vietnam War. San Francisco offered an education.
“I had to learn to survive.” From the very beginning, she wanted to go home, she did not know where she was. However, she was told that she was to learn a vocational skill. When she persisted to go home, she was told the BIA would get her a job.
“The longer I stayed here -- they kept me here -- I learned about myself, what it means to be an American Indian.”
Praising the young people who attended the AIM conference, Nov. 22-26, she urged Indian youths to learn their traditions, ceremonies and songs. “Learn your language, that is how you are going to learn to be strong.”
Whitehorse pointed out that Navajo elders say that when the people stop speaking their language, they will stop being identified as who they are as a people.
Urging young people to learn about their real history, she said it is important to know that the land of Navajos is held in trust by the US government and what that means in terms of natural resources.
Whitehorse studied law one year in order to make sure she understood federal Indian law. She discovered the secret of federal Indian law.
“I found out that it is not written to help us. It is written for Congress to use as they please.” She pointed out that Navajo elders are still being relocated because of the coal on their lands.
Besides being a target of relocation, Whitehorse was the target of another well-funded US government program.
It was “Native American sterilization, another genocide, another way to attack us.”
“Some of us were told, ‘You’re unfit to bring your own kind into this world. You’re uneducated, you’re on welfare. Your children are going to be on welfare too.’
“I only had one daughter when they did that to me. Sometimes I wish I had four or five children.”
“I’m very happy that a lot of families have little children,“ she said, urging parents to hold on to their children, and bring them up right.
“Make sure they keep their language.”
After boarding schools, relocation and sterilization, came self-determination.
But, she said, American Indian self-determination does not come easy.
“We have to work at it,“ she said, stressing the need to reunite and be strong. She said the future is in the hands of the youths.
The relocation programs were about removing the young people from the land, so the land could be seized for the resources.
Whitehorse said she stayed in the Bay area for four years, then went home.
“My education is very important to me. When I talk about where I’ve been, where I’m going, I always say, ‘I was here at the right time, at the right place, at the BIA’s expense.’ They sent me here, paid my way around, gave me money to stay. The more I stayed, the more involved I got with the movement on the island.”
Whitehorse said, "Stand up for what's right, even if you are standing alone."
.

Listen to more of this presentation, along with a talk by Yvonne Swan, Colville. Recorded by Earthcycles: http://www.ustream.tv/recorded/11027639

Thank you for exposing your
powerful up bringings at the boarding schools of your unheard stories. We are so grateful that you ALL are now/always have been/will be that much stronger and not only that giving us strength to speak out loudly. GOD BLESS/Stay even STRONGER with HEALTH/FAMILY!!