Lehman Brightman: The Real History of the Occupation of Alcatraz 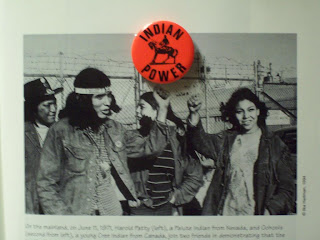 By Lehman Brightman, founder of United Native Americans
Photo: Harold Patty & Oohosis Wearing UNA "Indian Power" Buttons. Yet, Some People Whom Have Published These Picture's In Books Such as "You Are On Indian Land Alcatraz Island, 1969-1971 Edited By Troy R. Johnson, Seem To Over Look This. . . Why? .. Indian occupiers moments after the removal from Alcatraz Island on June 11, 1971. They are (from left): Harold Patty, a Paiute from Nevada; Oohosis, a Cree from Canada; Peggy Lee Ellenwood, a Sioux from Wolf Point, Montana; Sandy Berger, from Fort Hall, Idah © Ilka Hartmann 2009 http://www.ilkahartmann.com/
Read more and watch videos of the 1969 Occupation of Alcatraz:
http://censored-news.blogspot.com/2010/11/lehman-brightman-real-history-of.html
Posted by Censored News, publisher Brenda Norrell at November 20, 2010