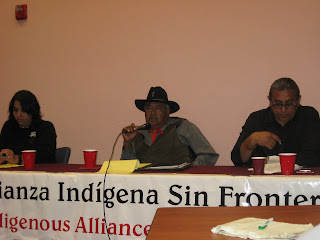 Topics include:
•Recent Changes to U.S. Immigration & Border Policies could erode or affirm indigenous peoples rights to maintain their cultural connections across the U.S. – Mexico border;
•Western Hemisphere Travel Initiative does not apply to Indigenous Mexican nationals who are culturally affiliated by blood relative, language, ceremonies and traditions
•Affects of Racism and negative political climate in Arizona on indigenous communities
•Potential Regulatory Solutions and Strategies to promote Southern Indigenous Rights and Justice.