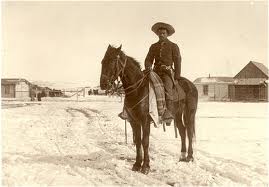 The American Indian Genocide Museum: There's no glory in the Confederate flag and a reminder of the Buffalo Soldiers as part of the massacre at Wounded Knee

When a black college student from the University of South Carolina displayed a Confederate flag in his dorm window, he received complaints and the school asked him to take it down. He took it down but he posted a video of the incident on YouTube.

It is kind of weird because black lawmakers here in Texas recently spoke out adamantly against a proposed specialty license plate with the Confederate flag.

Rep. Sheila Jackson Lee said, “Ill-intended or not, why would African-Americans want to be reminded of a legalized system of involuntary servitude, dehumanization, rape and mass murder? It’s as undesirable as another ethnic community wishing to relive the Holocaust…” Representative Lee is right because the soldiers who carried the Confederate flag into battle were fighting to uphold the institution of slavery, the economic engine which drove prosperity in the South.

The Department of Motor Vehicles Commissioners unanimously rejected the idea of a vanity license plate with the Confederate flag on it.

When the DMV Commissioners rejected one and approved the other, he quickly pointed out that they were both controversial in that the Buffalo Soldiers participated in the genocide of the Native Americans.

This controversy came to my attention by way of the Sunday edition of the Houston Chronicle on November 13, 2011. The story on page B1 was entitled, “Museum’s founder didn’t like being buffaloed”.

Buffalo Soldiers National Museum founder, Paul Mathews argued that, “You are comparing military units in the U.S. Army with a mission to protect and defend America against all enemies, both foreign and domestic, to the Confederate army with a mission to destroy America.”

It’s kind of weird that he should use the words, “mission to destroy America” when the definition of genocide is the deliberate and systematic destruction of religious, political or ethnic group of people. The Buffalo Soldiers claim to have engaged in 127 confirmed battles with Native Americans while inflicting on average 4.6 casualties per skirmish.

Approximately 36 years before the Buffalo Soldiers were mustered into the U.S. Cavalry, President Andrew Jackson signed into law the Indian Removal Act of 1830. No one can deny that this amounted to ethnic cleansing. When a United States President calls for ethnic cleansing, this is a mandate for genocide.

I am in total agreement with Texas Land Commissioner Jerry Patterson when he told the Texas Department of Motor Vehicles Commissioners that the Buffalo Soldiers committed genocide against the Native Americans.

One thing you can’t argue with is time. The Civil War ended in 1865. In 1866 Congress passed a law which allowed blacks to join the military. For a people to come out of 200 years of subjugation, exploitation and slavery and immediately join the U.S. Cavalry to fight the Indians is nothing for them to be proud of. Perhaps a better name for them would be the “Buffaloed Soldiers”.

You can go to YouTube and see the Buffalo Soldiers all dressed up in their U.S. Cavalry uniforms and what you are seeing is the evolution of a lie. And the lie is this: There was a time in American history when it was “O.K.” to kill Indians and that those who killed them were a force for good.

There is a picture of a Buffalo Soldier at Wounded Knee on their website. Was the slaughter of hundreds of unarmed men, women and children a force for good? I guess it would depend on who you asked. If you had asked Teddy Roosevelt he would have said, “The most ultimately righteous of all wars is a war with savages, though it is apt to be also the most terrible and inhuman.

The rude, fierce settler who drives the savage from the land lays all civilized mankind under a debt to him. American and Indian, Boer and Zulu, Cossack and Tartar, New Zealander and Maori,--in each case the victor, horrible though many of his deeds are, has laid deep the foundations for the future greatness of a mighty people.

The consequences of struggles for territory between civilized nations seem small by comparison. Looked at from the standpoint of the ages, it is of little moment whether Lorraine is part of Germany or of France, whether the northern Adriatic cities pay homage to Austrian Kaiser or Italian King; but it is of incalculable importance that America, Australia, and Siberia should pass out of the hands of their red, black, and yellow aboriginal owners, and become the heritage of the dominant world races.”

Was Teddy Roosevelt a force for good when he charged up San Juan Hill in Cuba? The Buffalo Soldiers served with him. Perhaps if there wasn’t such a disconnect from history we wouldn’t have men like Byron Thomas displaying the Confederate flag or dressing up in a Cavalry uniform. In 1901, Buffalo Soldier, William Fulbright wrote from Manila in the Philippines, “This struggle on the islands has been naught but a gigantic scheme of robbery and oppression”. The struggle on the islands was a continuation of the Indian Wars the Buffalo Soldiers are so proud of.

In 1896 Teddy Roosevelt was quoted in Century Magazine: “We should annex Hawaii immediately. It was a crime against the United States; it was a crime against white civilization, not to annex it two years and a half ago. The delay did damage that is perhaps irreparable; for it meant that at the critical period of the islands’ growth the influx of population consisted, not of white Americans, but of low cast laborers from the yellow races.”

The truly sad part of this whole situation is that we have men, the descendants of the victims of racism, becoming the champions of the right to display the very symbols of racism that once oppressed their ancestors. Sadly, they see themselves as champions of free speech. In fact, they are the products of a racist educational system that lifts up only the positive of one group while teaching only the negative about another.

Teaching a propagandized version of history will always result in people not only living a lie but unwittingly propagating the expansion of the lie. Paul Matthews became aware or the Buffalo Soldiers at Prairie View. He said, “I read two paragraphs about the Buffalo Soldiers, and I thought, ‘Man, the world needs to know about these people”.

He is right; the world does need to know about these people. The late Howard Zinn wrote, “Mass murder for a good cause is one of the sicknesses of our time.” Byron Thomas can continue displaying his Confederate flag just as Paul Matthews can continue dressing up in his George Custer styled Cavalry uniform but in so doing, they display a profound ignorance of history. It shows that we as a people have become an Orwellian, “double-think” nation that can vacation by reservations and debate both sides of the issue of the redistribution of wealth. The similarity between the reservations and the Nazi concentration camps is the farthest thing from the American mind even though the Jewish Holocaust was American history repeating itself. How so? On October 17, 1941, Adolph Hitler said, “As for the natives, we’ll have to screen them carefully. The Jew, that destroyer, we shall drive out…There’s only one duty: to Germanise this country by the immigration of Germans, and to look upon the natives as Redskins”.

The horrifying thing about Hitler is that he was emulating American history.

In reality, the American Holocaust has never really ended. Last month it was reported by BBC News that indigenous leader Nisio Gomes was shot dead in front of his community in Brazil. The news report read, “Nisio Gomes , 59, was part of a Guarani Kaiowa group that returned to their ancestral land at the start of this month after being evicted by ranchers. He was killed by a group of up to 40 masked gunmen who burst into the camp, witnesses said.

Land disputes between indigenous groups and ranchers are common in Mato Grosso do Sul State. Mr. Gomes was shot in the head, chest, arms and legs and his body was then driven away by the gunmen, community members said…Unconfirmed reports say two other Guaranis were abducted by the gunmen and may also have been killed… The group had been camping on a roadside following their eviction until they decided to return to their land at the beginning of November.

The killing has been condemned by the international group Survival, which campaigns for indigenous rights. ‘It seems the ranchers won’t be happy until they’ve eradicated the Guarani,’ Survival’s director Stephen Corry said.”

My questions to Mr. Paul Matthews of the Buffalo Soldiers Museum and the commissioners of the Texas Department of Motor Vehicles is this: How do we stop the killing if we do not admit that there is a problem? Will you be part of the solution or a part of the problem?

The Buffalo Soldiers are currently trying to gain back door deceptive credibility by having legislation passed in the U.S. Congress which would honor them not for their motorcycle chapters or their history of killing Indians but for their " role in the national parks". To easily oppose U.S. House Bill # 1022, click here. https://www.popvox.com/bills/us/112/hr1022 To easily oppose U.S. Senate Bill # 544 click here. https://www.popvox.com/bills/us/112/s544

How joining us in demanding the monuments to Buffalo Soldiers be removed?