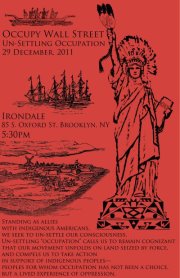 ROOKLYN, N. Y. -- Please join Occupy Wall St. at IRONDALE on the evening of December 29th 2011 as we connect the colonial occupation of Manhattan to Occupy Wall Street— an occupation of already occupied land. We are taking action on this day, on the 121st anniversary of the massacre at Wounded Knee, in order to initiate an open dialogue with indigenous Americans, to raise local and national awareness of ongoing Native struggles, and to recognize that the injustices and inequalities we all currently confront are the bricks and mortar of conquest and settler colonialism.

Conditions of capitalist exploitation are predicated upon the acquisition of territory and the dispossession and dehumanization of indigenous peoples. The American political economy of greed is forever implicated in settler nationalism.
Standing as allies with indigenous Americans, we seek to un-settle our consciousness.

Un-settling “occupation” calls us to remain cognizant that our movement unfolds on land seized by force, and compels us to take action in support of indigenous peoples—peoples for whom occupation has not been a choice, but a lived experience of oppression.

Join us for a conversation about how Occupy Wall St. can move toward a radical un-settling of “occupation”—in vision and in action—and build a movement that is more expansive, more inclusive, more conscious, and more just.

Gloria Miguel, Kuna, will perform excerpts from her one-woman play,
“Something Old, Something New, Something Borrowed, Something Blue"
As a movement striving to voice the experiences of the 99%, we must make space for those most marginalized by the mechanisms of settler colonialism: the original inhabitants of the land. Our movement’s uncritical promotion of the word “occupation" throws up barricades for many individuals, prevents our sisters and brothers from joining us, and impedes our efforts to erode ignorance and achieve decolonization. Let us pass the mic, turn up the volume, listen to Native voices, and break down the grammar of domination. Dismantling the rhetoric of colonialism enables us to subvert imperialist structures of power. By listening to indigenous perspectives on “occupation,” we move closer to creating a safe space for indigenous peoples to connect to the movement, and finding roads down which indigenous and non-indigenous collaborators can walk together, fight together, and engage in transformative intellectual, emotional, and direct action exchanges.
Please join us on December 29th at 5:30. IRONDALE is located at 85 S. Oxford St. in Brooklyn, NY.
Take the 2,3,4,5,N,R,Q,B,D Trains to Atlantic Ave-Pacific, the C Train to Lafayette, or the G Train to Fulton.
Questions? Email ljamsterdam@gmail.com
at December 27, 2011