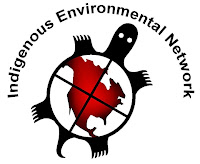 WASHINGTON -- A delegation of US Tribal leaders gathered together in Washington DC, during the third annual White House Tribal Leaders Summit to call on President Obama to reject a presidential permit for the proposed Keystone XL pipeline. The leaders presented President Obama with the “Mother Earth Accord” that outlines unique US Tribal and First Nations concerns over Keystone XL, Alberta Tar Sands, the heavy haul in Idaho and Montana, and presented a copy of the Academy Award Nominated Documentary film called “Pipe Dreams”

The 1,700-mile proposed Transcanada Keystone XL pipeline has been mired in controversy since its inception and poses a significant threat to tribal water quality, public health, and cultural heritage in both the United States and Canada. In Alberta, extraction of tar sands oil has already been linked to a 30% elevated rate of rare cancers and autoimmune diseases in First Nations communities downstream from the project.

President Steele of Oglala Sioux Nation stated, “I will stand against the Keystone XL pipeline as long as it threatens to contaminate the Mni Wiconi water pipeline and threatens the clean drinking water and health of the Oglala people.”

The Mother Earth Accord, developed this past September at the Rosebud Sioux Tribe Emergency Summit, demonstrates the unity among the Tribes on both side of the border and the State Department’s failure hold meaningful consultations with US tribes and treaty rights violations. Over twenty Canadian First Nations and US Tribes, as well as private landowners, private citizens, environmental NGO’s, Indigenous peoples organizations and political parties including the New Democratic Party of Canada, the official opposition of the federal Canadian Government, have endorsed it.

According to Chairman Rodney Bordeaux of the Rosebud Sioux Nation, ”I sat next to President Obama, and I asked him to not sign the Presidential Permit, and I feel that he listened to my concerns seriously. I stand with my brothers and sisters on both sides of the border in opposition to this proposed pipeline.”

“While we applaud President Obama’s reaction to the concerns of Tribes, land owners and civil society we are still greatly concerned that the administration has only delayed the decision. We have supported this bi-national delegation of First Nations and Tribal leaders to come to Washington DC to tell President Obama an outright denial of the Presidential permit for the Keystone XL Pipeline is the moral path forward.” Said Marty Cobenais, US Pipeline Campaigner for the Indigenous Environmental Network.

The Indigenous Environmental Network and our allies will continue to support the leadership and grassroots members of First Nations and US Tribes in their opposition Keystone XL and other initiatives that would violate the treaty rights and the human and ecological health of our peoples, lands and way of life.