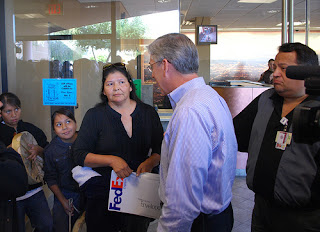 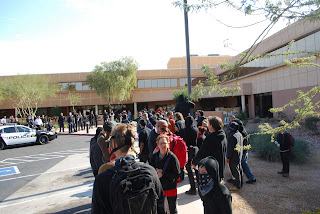 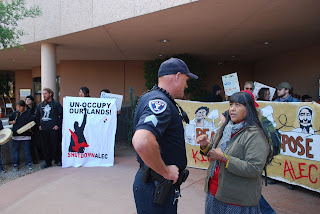 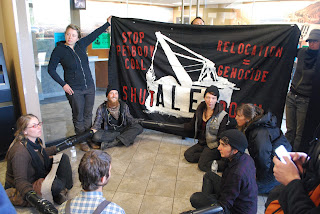 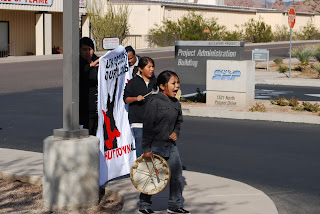 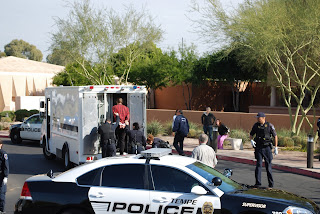 Native Americans and supporters protested today at the Salt River Project in Phoenix, as protests continue at the American Legislative Exchange Council, ALEC, meeting in Scottsdale in the Phoenix Valley.

Benally, Navajo resisting relocation at Big Mountain on the Navajo Nation upstaged Obama in Washington addressing the White House Tribal Nations Conference.
Obama's rhetoric was shadowed by the power of Benally's words at the protest in Arizona, on the devastation from coal fired power plants.
Benally said at the protest, “We have no water in our community. The wells are drying up, the water wells, the water table is dropping, a lot of pollution is being released into the ground water. There are lands that are cracking open, which has never happened before. Vegetation is being totally poisoned by sulfur dioxide from the blasting."
Native Americans protested the Salt River Project during four days of protesting the American Legislative Exchange Council, and its racist and corporate profiteering in Arizona.
The Salt River Project is the operator of the coal-fired power plant on the Navajo Nation at Page, Ariz. The Navajo Generating Station provides electric customers in Arizona, Nevada and California and supplies energy to pump water through the Central Arizona Project. Meanwhile, Navajos live with the sickness and disease from the pollution. Many Navajos live without running water and electricity.
Benally described how SRP destroys the environment and lives on the Navajo Nation.
“We’re trying to educate them and let them know what they are doing, what they are practicing on Black Mesa is impacting our communities. We have a lot of health issues that are not being addressed.”
Benally said coal is being sold to power plants cheap, at the level of prices from the 1960s. Navajos want an end to the below market price sales of coal.
Benally said it is time for the conversion to renewable energy to begin.
“Fossil fuel development is near its end."
Benally said that decades of coal mining on Black Mesa has left Navajos sick with widespread health problems.
“I have asthma. I have a lot of health issues. Ninety-five percent of the people in my community have health problems. Children are born with problems. People are developing all kinds of diseases that were not there before the coal mining started."
She said coal mining and power plants are releasing a lot of pollution, including arsenic and mercury. It is being released daily -- 24 hours a day and seven days a week -- and energy companies are not addressing the problems.
Benally said SRP official accepted a letter from the community, but there was no way to know if SRP would follow through on action.
Inside, she said supporters of Native Americans were locked down to get their message across.
She said what is happening on Black Mesa reveals the issues of global climate change. SRP and other energy companies are ignoring EPA, clean water and clean air regulations.
“We came here to let them know we are not blind. We will continue to pressure them. Their greed is impacting our community at a big level."
She said coal mining and power plants are draining the local aquifer and the Colorado River water is being diverted. “Our waters are being diverted to Phoenix, Tucson and other Southwest communities.”
"A lot of people have been relocated and displaced because of Peabody Coal, SRP and Navajo Generating Station."
Benally said of the SRP officials, “They need to come to the community members and sit down and talk with us directly without the tribal government making decisions over us, because we don’t vote for them. They are entities of the federal government."
Navajos from northern Arizona were joined by Tohono O’odham from the southern border, of the US and Mexico, to protest SRP.
Ofelia Rivas, founder of O'odham VOICE against the Wall, was protesting SRP. Rivas, an elder and activist, 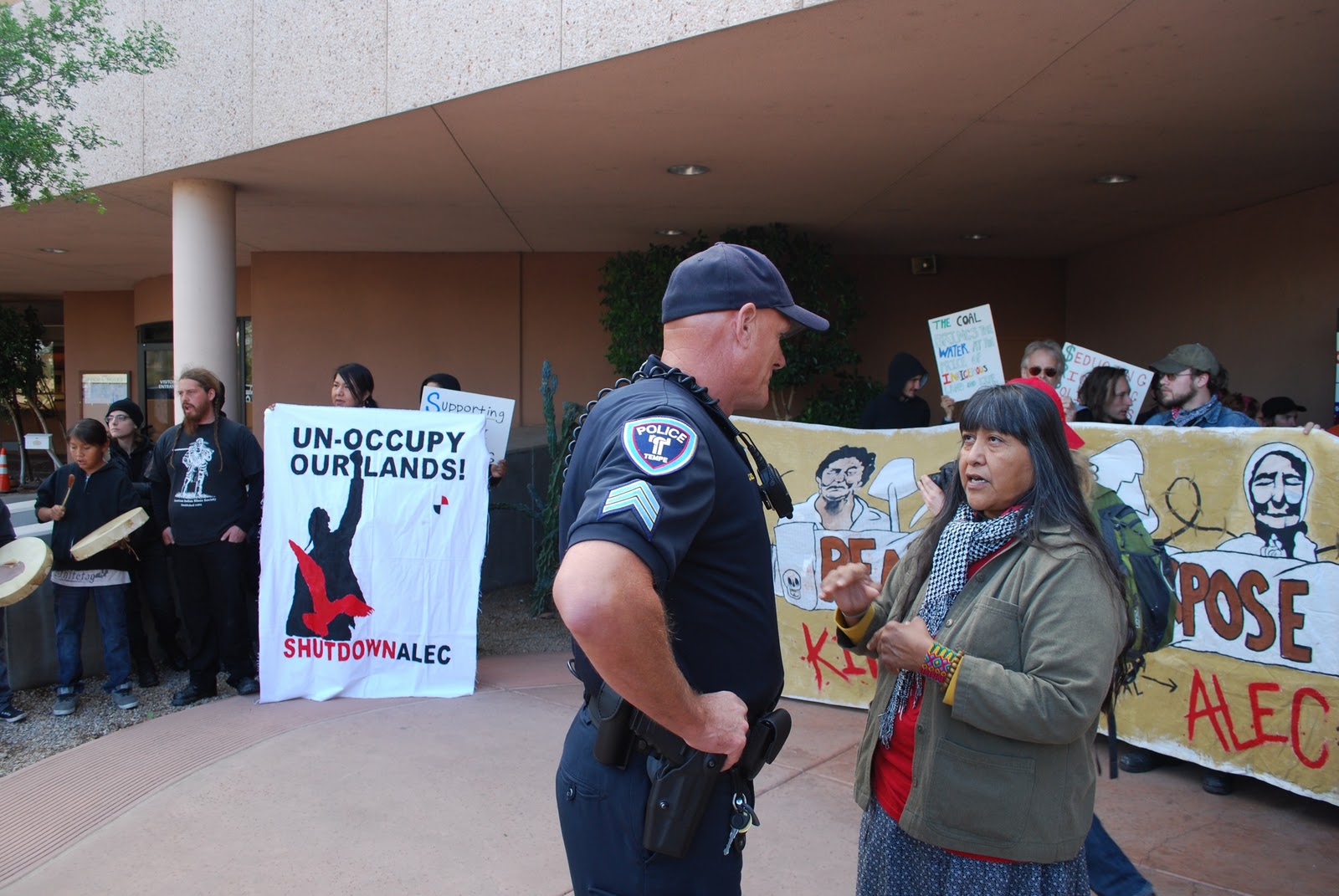 said, “As Indigenous People we understand that the balance of the land is the balance of our people and any disturbance of that is very devastating, not only to our spiritual health, but to our deep connection to the land and all living things. As Indigenous People we are not separated from our environment. We’re deeply connected to everything in the universe: the land, the mountains, water, air, and all plant and animal life.”
Rivas said highway construction, including the proposed loop 202 freeway extension that threatens South Mountain, would devastate more sacred land. Further, O’odham oppose the continuing construction of the US and Mexico border and the militarization.
“Trade policies such as NAFTA and CANAMEX alter our way of life and threaten our Him’dag. We will no longer accept the violence the state attempts to enforce on us along their border, especially the aggressive legislation of ALEC. Indigenous Peoples demand the implementation of the Declaration on the Rights of Indigenous Peoples, as well as the rights of our Mother Earth,” Rivas said.
“Enough is enough, it ends now!”
The massive canals constructed before the illegal occupation of O’odham lands are now being utilized by Salt River Project. O’odham culture is deeply rooted throughout this area, which is as far north as the Phoenix Valley, as far west as the coast of Mexico in what is now Rocky Point, east as the San Pedro river and as far south as Hermosillo and the Sierra Madres Mountains.
Ray Aguilar stated that “the air conditioning and power we enjoy and water we drink comes at the suffering caused by SRP and Peabody’s exploitation of the land and people. When will we realize that our privileges are based on this? We must take further action. I just spent one week doing direct, on-land support with Black Mesa residents assisting with basic essential human needs. That’s why I’m here today. This critical situation would not exist if not for these greedy corporations.”
Peabody Energy, also an ALEC member, is the world’s largest private-sector coal company. With 2010 sales of 246 million tons and nearly $7 billion in revenues, Peabody creates 10 percent of U.S. power and 2 percent of worldwide electricity.
Since 1974 more than 14,000 Dine’ families have been forcibly removed from their ancestral homelands due in large part due to U.S.-backed tribal councils and cola mining.
To protest the deadly legacy of environmental and cultural destruction caused by the company’s collusion with Peabody Energy the protest has stated the following:
The protest of SRP is part of the four days of protests against ALEC, the American Legislative Exchange Council, meeting in Scottsdale in the Phoenix Valley.
O'odham and others were pepper sprayed on Wednesday as part of the action to shut down ALEC. Tohono O'odham Veteran David Ortega was hospitalized with after being pepper-sprayed.
Native American protesters wore black today in solidarity with those pepper sprayed and arrested, and in response to the bias in the media coverage of the protests.
Background:
ALEC is not a lobby; it is not a front group. It is much more powerful than that. Through ALEC, behind closed doors, corporations hand state legislators the changes to the law they desire that directly benefit their bottom line. Along with legislators, corporations have membership in ALEC. Corporations sit on all nine ALEC task forces and vote with legislators to approve “model” bills. They have their own corporate governing board which meets jointly with the legislative board. (ALEC says that corporations do not vote on the board.) They fund almost all of ALEC's operations. Participating legislators, overwhelmingly conservative Republicans, then bring those proposals home and introduce them in statehouses across the land as their own brilliant ideas and important public policy innovations—without disclosing that corporations crafted and voted on the bills. ALEC boasts that it has over 1,000 of these bills introduced by legislative members every year, with one in every five of them enacted into law. ALEC describes itself as a “unique,” “unparalleled” and “unmatched” organization. It might be right. It is as if a state legislature had been reconstituted, yet corporations had pushed the people out the door. Learn more atwww.ALECexposed.org
at December 02, 2011

Brenda, I'm just commenting here to 1 item: "Since 1974 more than 14,000 Dine’ families have been forcibly removed from their ancestral homelands due in large part due to U.S.-backed tribal councils and cola[sic] mining."

As I've written in numerous places on the Internet (especially at own website, http://selfsip.org ), all the edicts/mandates/laws/directives/etc of legislators whether in a state house, Congress or tribal council are just words. It is the enforcers - in this case tribal police? - who turn those words into actual physical harm. When large numbers of people make the role of LAW ENFORCEMENT unpopular by not voluntarily associating with anyone in that position (in any of the vast number of enforcement agencies) who will not be convinced by reasoned persuasion - negative social preferencing, there will be far fewer government enforcers. Consequently with far few enforcers, there will be far fewer government rules and regulations - VERY (?Most?) often promoted by corporations, which are technically only entities as a result of their "legal creation" by government. No voluntary association means no sales, no service, no camaraderie - NO anything, including no violence!
(More on beyond protests : http://selfsip.org/focus/protestsnotenough.html)

Native Americans have for a very large part let themselves be seduced by federal (and likely some individual state) government entitlements of various kinds. Therefore in order to be consistent with stated wants to be independent and for demands that their lands be left alone, Native Americans need to wean themselves from these roles as direct dependents on the US government. (This is not unlike those physicians who want government out of the practice of medicine but still want the government to control who can "practice medicine", in essence a government-controlled monopoly.)

Thank you, Louise, for continuing to stand up for the generations. I pray your words do not continue to fall on deaf ears. Tribal leaders, listen up! Listen to the women who know what's best for our generations!

Thank you all anti ALEC protesters for speaking up against the coal corporations ruining the land air water and space without penalty.

Thank you Miss Louise and all the anti Alec advocates for speaking out against corporate abuse(SRP & Peabody energy) of our local communities!= with dirty coal expoiltation.