O'odham and other Native Americans protest the American Legislative Exchange Council, ALEC, in Scottsdale, Arizona on Nov. 30. After being pepper sprayed Tohono O'odham Veteran and elder David Ortega was hospitalized.
By Brenda Norrell
Censored News
Today, Friday, Dec. 2, O'odham from Tohono O'odham, Salt River and Gila River, are among the Native Americans protesting ALEC, during four days of protests. They encourage everyone to wear black in solidarity with those pepper sprayed and the eight arrested on Wednesday. They are also wearing black to mourn the bias in reporting of their protests by the media. 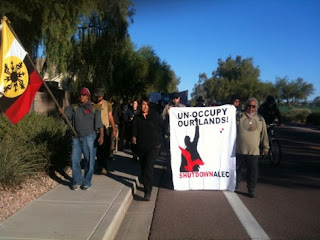 In Arizona, O'odham are fighting the increased militarization of their lands, abuse by the US Border Patrol and racistimmigration policies that victimize all peoples of color.
Apaches are fighting copper mining, while all Indian Nations fight to protect their water rights from seizure by the state and federal governments who work in collusion with corporations.
Navajos fight the longstanding genocide and forced relocation by Peabody Coal mining and devastating pollution from three coal-fired power plants, Cold War uranium mining and widespread oil and gas drilling.
Havasupai and Hualapai battle new uranium mining in their homelands in the Grand Canyon region.
White supremacy within the highest levels of government in Arizona has led to widespread violations of rights for
Native Americans in Arizona. This white supremacy reveals itself in Arizona's funding for private prisons operated by CCA, Corrections Corporation of America.
Peabody Energy, CCA and Salt River Project are among the corporate profiteers and members of ALEC.
-- Censored News
ALEC Corporations
http://www.sourcewatch.org

ALEC is not a lobby; it is not a front group. It is much more powerful than that. Through ALEC, behind closed doors, corporations hand state legislators the changes to the law they desire that directly benefit their bottom line. Along with legislators, corporations have membership in ALEC. Corporations sit on all nine ALEC task forces and vote with legislators to approve “model” bills. They have their own corporate governing board which meets jointly with the legislative board. (ALEC says that corporations do not vote on the board.) They fund almost all of ALEC's operations. Participating legislators, overwhelmingly conservative Republicans, then bring those proposals home and introduce them in statehouses across the land as their own brilliant ideas and important public policy innovations—without disclosing that corporations crafted and voted on the bills. ALEC boasts that it has over 1,000 of these bills introduced by legislative members every year, with one in every five of them enacted into law. ALEC describes itself as a “unique,” “unparalleled” and “unmatched” organization. It might be right. It is as if a state legislature had been reconstituted, yet corporations had pushed the people out the door. Learn more at ALECexposed.org
at December 02, 2011