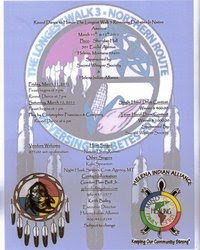 The Sacred Whisper Society in Coalition with the Helena Indian Alliance will be sponsoring a Round Dance to Honor the Sisters and Brothers who are Walking to promote awareness to Diabetes! Pilamaya aloh.
at March 04, 2011 No comments:

Audio interviews of elders and warriors can be found at http://audioboo.fm/CanteTenza

The occupation occurred as a result of human rights and civil rights
abuses, including physical assault, of Lakota elders at the center,
the illegal selling of drugs and alcohol from the building by center
staff, refusal of Oglala tribal government officials to take action,
and the use of the tribal judicial office to attack and penalize
elders and advocates who spoke out against abuse, graft, and
corruption occurring in the elderly meals program and throughout
complicit tribal government officials.

The elders and warrior societies are demanding the removal of all
current center staff, the construction of a new, sanitary building,
restoration of healthy meals, expansion of elderly meals to those home-
bound, and an investigation into the graft and corruption in the
program and those complicit tribal officials.

"The former president and the cook have discriminated against the
elders at the Porcupine Elderly Meals Center. Elders are demanding
them to be removed immediately.

The Elders will be leading this occupation with the support and
protection of three warrior societies - the Strong Heart Warrior
Society, United Urban Warrior Society, and Grassroots AIM.

I, Enoch Brings Plenty, as president of the Meals for the Elderly
Program at Porcupine, will try my best to please the Elders in my
district as best as I can -to bring back honesty, trust and integrity.
This is why these three warrior societies are here with us. They are
going to teach our children how to protect and remain free with the
elders of our oyate. Hoka hey!"

In support of the elder’s statement, the Strong Heart Warrior Society
said, “The elders have exhausted all legal remedies that they possibly
can and now they face the critical mass. So it is now their urgency to
request these warrior societies to step up and give them that
opportunity to regain control for what is rightfully theirs.”

The Oglala Tribal Council, which has been at the center of controversy
for years over graft and corruption in their ranks, continues to
publicly state there is no problem with Pine Ridge Reservation elders.
Activists have noted numerous incidents of retaliation and dirty
tricks in order to penalize elders and advocates from speaking out and
making these abuses public.

The occupation is planned until the demands are met. While State and
Federal officials have been slow to respond to this crisis, the South
Dakota Governor’s Office is now aware of the situation, as is the U.S.
Justice Department.
###

The Oglala Lakota Pine Ridge Reservation in southwestern South Dakota
is the size of the state of Connecticut. Due to decades of abuse,
corruption and colonial enforcement, Pine Ridge faces epidemic rates
of suicide, alcohol and drug abuse, elder abuse, and poverty. Life
expectancy for Lakota men is below 40 years of age. Nearly ¾ of the
Lakota people have lost their language, and the traditional language
is on the verge of extinction in Pine Ridge. The reservation has one
of the highest rates of unsolved murders. These unsolved deaths are
widely attributed to violent retaliation against those seeking an end
to corruption and assertion of traditional Lakota sovereignty.

Cante Tenza Okolakiciye also known as the Strong Heart Warrior Society
of the Lakota Nation is an ancient Lakota warrior society as well as a
broad-based civil rights movement that works to protect, enforce and
restore treaty rights, civil rights, and sovereignty of Native people
and their communities across Turtle Island. In addition to activist
efforts to protect the land and people, each year Cante Tenza collects
and freely distributes shoes, winter coats, school supplies, food, and
other support to Oglala Lakota elders, children and families.
www.lakotaoyate.net “Lakota Oyate” on Facebook
at March 04, 2011 No comments: