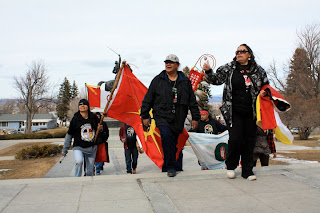 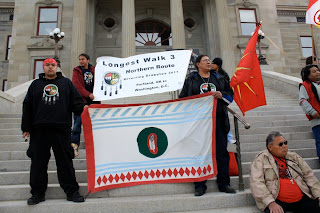 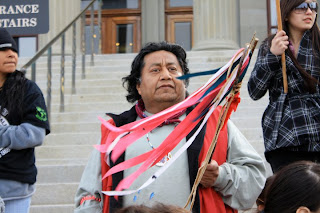 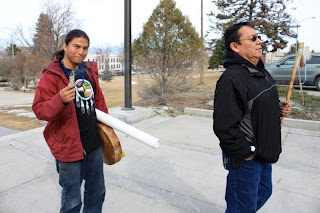 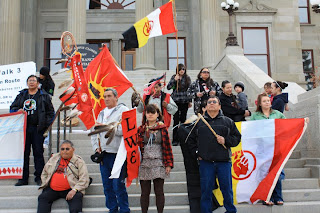 Photos by Chris Francisco, coordinator, Long Walk 3 Northern Route, rally at Montana Capitol in Helena, March 11, 2011. The walkers are now in Bozeman and headed toward Billings, Montana.
Owns the Sabre Long Walk 3: These seven are doing the impossible
By Brenda Norrell
Censored News
http://www.bsnorrell.blogspot.com/
Paul Owns the Sabre, Cheyenne River Lakota, said, "It is a high honor to be with these young people. They are doing the impossible."
Owns the Sabre said the seven Native Americans walking and running across America do not even know themselves how important each one is.
Owns the Sabre said the four walkers and three runners have few funds, and very little national support, and are relying on community support in the towns they pass through.
Owns the Sabre was also on the Long Walk 1978 and 30 years later on the Long Walk 2 in 2008. Owns the Sabre said it is an honor to again be with three of the Native youths who were on the Long Walk 2 northern route, and are now crossing America for the second time.
Craig Luther, Navajo, from Sanders, Arizona, is now on Long Walk 3 with his father, Chris. Carl "Bad Bear" Sampson is Western Shoshone from Nevada. Lisa Peake, Ojibwe/Pomo, is one of the few young Native American women to walk across America on these Long Walks for the second time.
Owns the Sabre, speaking from Bozeman, Montana, recalled the journey of Chief Joseph of the Nez Perce who led his people across Lobo Pass, a pass that the Long Walk 3 northern route crossed, after Long Walk 3 walked and ran through heavy snow in the mountains of Oregon.
Owns the Sabre said the walkers of the Long Walk 3 are making this journey for those who cannot. He added that both he and the coordinator, Navajo Chris Francisco, from Shiprock, N.M., have diabetes.
"These walkers and runners have no idea the importance of what they are doing," Owns the Sabre said.
Lisa Peake, Ojibwe/Pomo, is in the top photo, on the far left. Carl Bad Bear Sampson, Western Shoshone, is in photo 2 on the far left. Long walker Manny is in photo 3. Navajos Craig and his father Chris are in photo 4. Owns the Sabre, Cheyenne River Lakota, is photographed in the last photo, on the lower left, along with long walker Ellyn Carlson, on the steps of the Montana Capitol. Not photographed is long walker and runner Chris Francisco, Navajo coordinator, who took these photos. Thanks to all of you!
Please support these seven who made it through the snows of Oregon and mountains of Montana with so little. Please especially send your support to the Native youths. It is really a walk for survival, sending a message to other Native youths of the indomitable human spirit. -- Brenda Norrell, Censored News
at March 13, 2011 1 comment: