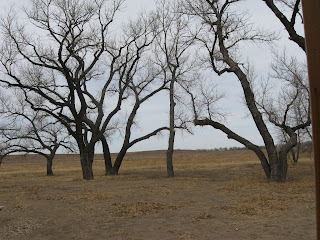 The history of the Smithsonian Institution, like the history taught in US classrooms, is largely one of deception and fiction
By Brenda Norrell
Censored News
http://www.bsnorrell.blogspot.com
Photo: Trees at Sand Creek massacre. Photo Brenda Norrell.
The Smithsonian's dark history includes the collecting of American Indian brains for a racist experiment which claimed to reveal the relationship between race and intelligence. Brains were collected for bounty. One of the massacres where this sinister collection of brains was carried out was at Sand Creek in Colorado, a brutal massacre where fleeing Cheyenne and Arapaho women and children were murdered in 1864. The following article is republished, so the facts will not be forgotten, with a special thank you to Pawnee professor James Riding In who provided much of the information. After publication of this article, I wrote the Smithsonian and asked if it was true that more than 10,000 Indian skulls remained at the Smithsonian. There was no response. --Brenda Norrell
Smithsonian harbored Ishi's brain
by Brenda Norrell
(March 19, 1999)
The Smithsonian Institution admits, after a probe and nearly a century
of secrecy, that it housed the brain of Ishi, a Yahi Indian who
walked into Oroville, Calif., in 1911.

But the admission comes only after American Indians demanded a
beffiting burial and University of California researchers probed the
whereabouts of Ishi's remains, that the Smithsonian admits that Ishi's
brain was in a warehouse at the National Museum of Natural History.

Pointing to scientific racism, James Riding In, Pawnee professor at
Arizona State University, said American Indian skulls at the
Smithsonian are part of the U.S. Army's research intended to show that
whites were superior based on the size of their skulls.

Riding In said the Smithsonian has been less than forthcoming about
the American Indian remains in its possession, as mandated by the
Native American Graves Protection and Repatriation Act.

Riding In said Smithsonian Institution curators previously acquired
18,500 bodies and most of the skulls were collected by the Army
Medical Museum in the 1800s. While most of the crania gather dust at
the Smithsonian today, others have been destroyed by carbon 14 dating
analysis.

The research shows that Samuel G. Morton, in the early 1830s, worked
in craniology and phrenology, to devise tests on skulls, in relation
to intelligence and crania size. He poured mustard seeds into human
skulls to determine size and volume in his research.

In the process, Morton assembled a large collection of American Indian
skulls.

"He never questioned the morality of stealing Indian crania from
graves," Riding In said.

Morton paid soldiers, settlers, and others for Indian skulls. With
bounty offered, American Indian skulls became sought after in what
Riding In describes as a cottage industry.

The United States Army established a program during the 1860s for
studying Indian crania. Among those massacred, beheaded and their
crania taken, were a group of friendly Cheyenne, Kiowa and Arapaho
near Sand Creek, Colo.

The final chapter in the legacy of Ishi, whose biography became a
documentary film, is included in this dark, untold chapter of American
history.

Although Ishi made a final request that there be no autoposy, the
anthropologists who supposedly befriended him, removed his brain
during an autoposy in 1916. The removal and transfer to the
Smithsonian were kept secret until recently.

"It was not uncommon to study brains in the early 20th century," said
anthropologist Orin Starn, who led the Smithsonian to admit the
location of Ishi's brain. "Some people thought that different races
had different brain sizes."

Starn said Ishi was "really was a victim of a holocaust."

The investigation was spearheaded by Nancy Rockafellar, a research
historian at the University of California in San Francisco in the
History of Health Science Department, and Starn, a Duke University
anthropologist.

Rockafellar said that before his death in 1916 from tuberculosis, two
persons appeared to befriend Ishi, anthropologist Thomas Waterman and
museum curator Alfred Kroeber. Rockafellar determined that after the
autoposy, Kroeber sent Ishi's brain to the Smithsonian for study in
1917.

Native Americans in California plan to carry out a proper burial at
Ishi's homeland at Mount Lassen.
(A proper burial of Ishi did follow.)
Additional reference to the US collection of American Indian skulls: "In 1862, during the Civil War, the Surgeon General established the United States Army Medical Museum (AMM; now the National Museum of Health and Medicine of the Armed Forces Institute of Pathology)."
Photographs of American Indian skulls at this museum: "Tribes or races represented are Apache, Arapaho, Arikara, Blackfoot, Cheyenne, Comanche, Dakota, Eskimo, Hawaiian, Negro, Paiute, Ponca, San Miguel and San Nicholas islands (California), White, and Wichita." Read more:
http://bsnorrell.blogspot.com/p/reference-smithsonians-collection-of.html
.
at March 16, 2011 No comments: 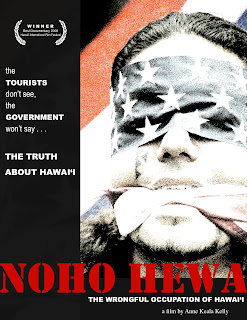 Joleen Oshiro of the Honolulu Star-Bulletin said, "It conveys knowledge that resonates in the heart as well as the mind."
Albert Wendt, Maori artist and author of Sons for the Return Home, also praised the film. “NOHO HEWA is a brilliant, incisive, and complex exposé of colonialism (American and other) and its devastating effects on Kanaka Maoli, the indigenous people of Hawaii, and their land," Wendt said.
"After you see this film you will never again believe the lies and myths perpetuated about Hawaii by successive American governments, non-Hawaiian historians, writers, filmmakers, the tourism industry, and others.”

'Noho Hewa' is the first Native Hawaiian produced film of the 21st century to document the Hawaiian resistance to the U.S. occupation of their country. Produced and directed by independent journalist and filmmaker, Anne Keala Kelly, it looks at desecration of sacred sites and burials, and how the U.S. policies, via the military, the GMO industry and tourism use desecration as a colonial tool of ethnic cleansing.
Keala's work focuses on Hawaiian political and cultural issues, indigenous peoples and the environment. In 2008, she co-produced “The Other Hawai’i,” for Al Jazeera English’s “Inside USA,” and she was a Ted Scripps Environmental Journalism Fellow at the University of Colorado, Boulder in 2006 - 2007. Keala has filed stories from her home in Hawai’i, as well as Kathmandu and Geneva, and her articles, editorials and essays have been published in the Honolulu Advertiser, The Nation, American Indian Quarterly, the Honolulu Weekly and other journals. She has produced features and documentaries for the Pacifica Network’s Free Speech Radio News and NPR’s The Environment Report.
Go to http://www.nohohewa.com/ to purchase a copy of the DVD and support the film’s distribution. In Hawaiian language, the word HEWA means wrong, in the world of film and media, NOHO HEWA tells the truth about what is happening to the Hawaiian people and their homeland.
If you would like to arrange a public screening for your community or campus please send inquiries to nohohewa@ gmail.com
Filmmaker Anne Keala Kelly has kindly offered to donate 10 percent of sales to Censored News, if you mention you read about it here. Thank you.
at March 16, 2011 No comments: