LOLO PASS, Idaho -- On the Longest Walk 3 northern route, walker Lisa Peake, Ojibwe/Pomo, offers a prayer for the earth and the people, when walkers arrive at the oversized equipment for Conoco Phillips tar sands refinery, which is snowbound on the pass.
Long walker Paul Owns the Sabre, Cheyenne River Lakota elder, pointed out that Chief Joseph of the Nez Perce led his people over Lolo Pass.
Down the route, Carol Marsh, 69, was among the protesters that temporarily blocked the megaloads on March 10, 2010, in Missoula, Montana. The enormous equipment was entroute to the ConocoPhillips tar sands oil refinery in Billings.
“These megaloads are serving refineries that process oil from the Alberta tar sands, the worst ecological disaster the planet has ever faced. The tar sands undermine any effort to stop global warming. I did this because I want there to be a world for my granddaughter to grow up in,” Marsh said.

Indigenous fighting tar sands trail of cancer and destruction
First Nations in Canada, and the Indigenous Environmental Network, have a global campaign underway to halt the tar sands environmental destruction. Indigenous environmental activists rallied to halt the tar sands oil industry, with actions in London and at the climate summits in Cochabamba, Bolivia, and Cancun, Mexico, in 2010.
Clayton Thomas-Muller, Mathais Colomb Cree Nation also known as Pukatawagan in Northern Manitoba, Canada, has led a campaign to halt the tar sands at IEN.
The tar sands mining is stripping crude oil from the Alberta tar sands and leaving behind toxic heavy metals and carcinogens that pollute nearby native lands.
Thomas-Muller told Yes! magazine, "The five First Nations in the region of the tar sands rely on traditional food sources, like moose, fish, beaver, and muskrat, all of which have become contaminated by mining pollution.
"We’re talking about a community of just 1,200 that’s seen more than 100 deaths in the last decade from rare cancers and autoimmune diseases. The tar sands leases also violate aboriginal treaty rights; they were sold by the provincial government without the prior informed consent of local communities." 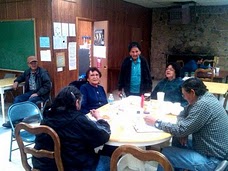 PORCUPINE, S.D. -- The occupation of the elderly center at Porcupine remains underway. Duane Martin, Sr., of the Strongheart Warrior Society, who led the occupation remains in jail.
Meanwhile, the Porcupine District Council passed a resolution for the removal of occupiers for Friday, April 1, 2011.
In related news, the Oglala Sioux Tribe suspended council representative Deborah Rooks-Cook on Tuesday, for 20 days without pay, following allegations of elderly abuse.
The alleged abuse by Rooks-Cook was one of the incidents that led up to the occupation of the elderly center. The council voted 10-7 to suspend Rooks-Cook following an impeachment complaint filed by Darlis Morrison-Crow.
The Rapid City Journal reports that he council voted 10-7 to suspend Rooks-Cook following an impeachment complaint filed by Darlis Morrison-Crow. The complaint alleges that Rooks-Cook's behavior was verbally and physically abusive to Lakota elders outside of tribal headquarters, following an executive committee meeting on Jan. 25. Those voting against suspending Rooks-Cook were: Elaine Martinez, Toby Big Boy, Paul Little, Robin Tapio, Jim Meeks, Beverly Tuttle and Kevin Yellow Bird Steele.
Today, the Lakota Oyate said that elders from the occupation will attend an Oglala Tribal Council session. The Lakota Oyate stated that Duane Martin is being imprisoned illegally on false charges.
The Porcupine District Council, however, does not support the occupation of the elderly center.
The resolution, calling for removal of the occupiers, states that on Friday, March 4, 2011 "a small group of elders and non residents illegally occupied the Porcupine Elderly meals center building, and in the process, disrupted much needed services to the majority of elders in the district." The resolution makes allegations against those occupying the elderly center.
The occupiers, however, continue to deny the allegations and have initiated investigations into unsanitary conditions, spoiled food and corruption at the elderly center.
When the occupation began, the Strongheart Warrior Society said, "The elders and warrior societies are demanding the removal of all current center staff, the construction of a new, sanitary building, restoration of healthy meals, expansion of elderly meals to those homebound, and investigation into the graft and corruption in the program no matter where it leads. The occupation will continue until these demands are met."
Read more:
Porcupine resolution seeks removal of occupiers on Friday:
http://censored-news.blogspot.com/2011/03/porcupine-resolution-seeks-removeal-of.html
Rapid City Journal: Rooks-Cook's removal
http://www.rapidcityjournal.com/news/local/article_f45521ee-5af0-11e0-9b2b-001cc4c002e0.html Statements from the Strongheart Warrior Society
http://bsnorrell.blogspot.com/2011/03/lakota-occupation-tribal-officials-no.html
.
Also in the news today from South Dakota Indian country:
Native Sun News: Radiation levels high on South Dakota Indian lands
Read the article by Talli Nauman, and the results of water samples by Defenders of the Black Hills:
"A U.S. Forest Service Draft Environmental Impact Statement showing 89 abandoned uranium mines in extreme northwest South Dakota alerted Defenders of the Black Hills to the potential for radioactive contamination of water supplies downstream, according to the report."
http://64.38.12.138/News/2011/000987.asp
Related: South Dakota eases uranium mining laws:
http://www.reuters.com/article/2011/03/16/us-uranium-southdakota-idUSTRE72F0CX20110316
at March 31, 2011 No comments: