ACLU Sues US for Information on Targeted Killing Program 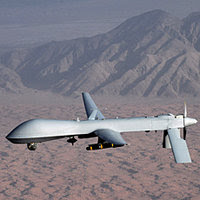 
By ACLU
Posted at Censored News
Today we filed a lawsuit under the Freedom of Information Act to demand that the government release basic — and accurate — information about the government’s targeted killing program.
Our government’s deliberate and premeditated killing of American terrorism suspects raises profound questions that ought to be the subject of public debate. Unfortunately the Obama administration has released very little information about the practice — its official position is that the targeted killing program is a state secret — and some of the information it has released has been misleading.
Our suit overlaps with the one recently filed by The New York Times insofar as it seeks the legal memos on which the targeted killing program is based. But our suit is broader. We’re seeking, in addition to the legal memos, the government’s evidentiary basis for strikes that killed three Americans in Yemen in the fall of 2011. We’re also seeking information about the process by which the administration adds Americans to secret government “kill lists.” We think it’s crucial that the administration release the legal memos, but we don’t think the memos alone will allow the public to evaluate the lawfulness and wisdom of the program.
We know something about the fall 2011 strikes from media reports. On September 30, the CIA and the military’s Joint Special Operations Command (JSOC) jointly carried out the targeted killing of Anwar al-Awlaki, a U.S. citizen born in New Mexico, using missiles fired from unmanned drones in Yemen. A second U.S. citizen, Samir Khan, was killed in the same attack. Two weeks later, Anwar al-Awlaki’s son, Abdulrahman, a 16-year-old U.S. citizen born in Colorado, was killed in another U.S. drone strike elsewhere in Yemen. The administration has not adequately explained the legal basis for these strikes, and it has not explained the factual basis, either.
Soon after the fall 2011 strikes, we submitted a FOIA request to the CIA, Department of Defense, and Department of Justice (DOJ). Three months later, we have yet to receive a single document in response. Outrageously, the CIA and the DOJ Office of Legal Counsel responded by refusing to confirm or deny the existence or nonexistence of records responsive to our request. Essentially, these agencies are saying the targeted killing program is so secret that they can’t even acknowledge that it exists.

This response is incredible, in the original sense of that word—it simply lacks credibility. The press has reported since early 2010 that Anwar al-Awlaki had been placed on “kill lists” maintained by the CIA and JSOC, and articles have discussed in detail the secret process by which he was placed there. After the killings of the three U.S. citizens last fall, newspapers reported extensive details about the strikes, including how the CIA and JSOC coordinated and the number of drones involved. The Times described a “secret” OLC memo that lays out the Administration’s legal justifications for placing al-Awlaki on the kill lists and killing him. Much of the reporting was based on statements by government officials, albeit officials who were unwilling to be quoted for attribution.
Some officials, including President Obama, have spoken on the record about the program. They have publicly claimed responsibility for killing al-Awlaki, and they have more generally defended the government’s right to kill citizens after a secret non-judicial process. Just last week, Secretary of Defense Leon Panetta acknowledged on 60 Minutes that the U.S. can and does carry out targeted killings of U.S. citizens subject to the recommendations of the CIA Director and the Secretary of Defense and pursuant to the President’s authorization. And this week, President Obama publicly defended the CIA targeted killing program in alive internet interview [starts at minute 26:30].
The government’s self-serving attitude toward transparency and disclosure is unacceptable. Officials cannot be allowed to release bits of information about the targeted killing program when they think it will bolster their position, but refuse even to confirm the existence of a targeted killing program when organizations like the ACLU or journalists file FOIA requests in the service of real transparency and accountability. One news report indicates that the Obama administration may be planning to release more information about the targeted killing program. Let’s hope that’s true. The public has a right to know the evidence and legal basis for the deliberate targeted killing of U.S. citizens. So chilling a power must be opened to public scrutiny and debate.
Learn more about targeted killings: Sign up for breaking news alerts,