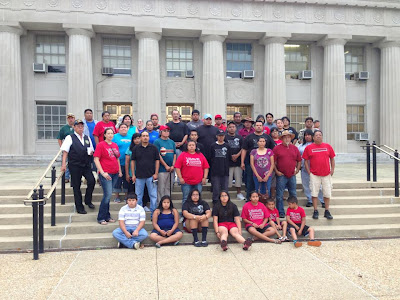 Hickory Ground Poarch Creek were at Elmore County courthouse supporting Wayland Gray, Mike Deo, Mike Harjo, and a Cherokee from Alabama, "Maggot," in their court hearings today, Hickory Ground said in a statement.
Three of the ones arrested had their trespassing charges dropped. Wayland Gray was originally charged with terrorist threats and trespassing. The charges were amended to disorderly conduct after the Grand Jury found no evidence. Gray was offered a plea deal to plead guilty for disorderly conduct, in exchange the court would drop the trespassing charge and there would be no jail time, which carries up to three  months if found guilty. Gray, however, pleaded not guilty and is scheduled for trial on August 29. 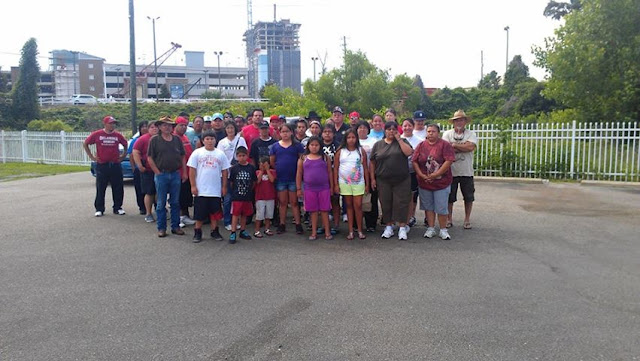 
Wayland Gray said, "They would not allow us in the fence and wouldn't tell us where the mass grave was located.
"They are cowards. When we got on the property a sudden wind came and started throwing debris off the building. A construction worker told us it tore up $4,000 worth of plastic off the roof. The creator and ancestors were with us. In the background is the towering monster they are building on our ancestors and sacred land.
"Never surrender," Gray said.
Gray said he is seeking support for "our War against the Poarch Creek Band Officials in Alabama that are desecrating our ceremonial ground and have dug up 56 remains and putting them in a Hitler style mass grave at the corner of the property so they can build their over $300,000,000 Casino Resort, Hotel, Bars, Retail Shops, Museum for the Artifacts and Funerary Objects to bring tourist from around the world is what they say.
"They also dug up seven chiefs out of the arbors then put them back and are building the casino around them. They must be stopped its a fight for all nations and nationalities cause if they win it will make it easier for developers in the future to build on everyone's sacred places and burials.we are calling on all nations, nationalities and countries to join us in this sacred and desecration war."
Gray's email is waylandgray@yahoo.com
at June 18, 2013