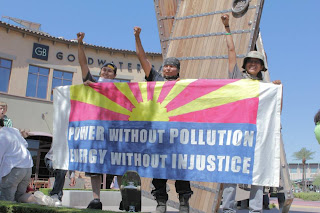 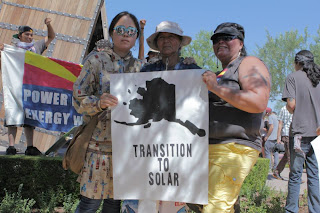 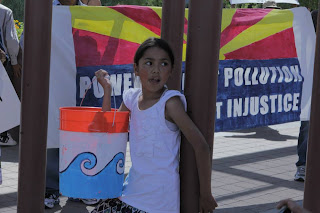 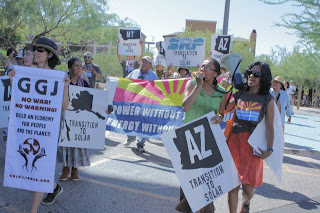 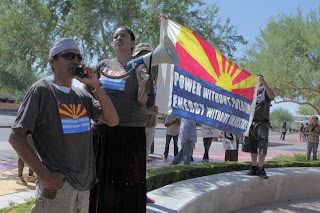 Black Mesa Water Coalition said on Tuesday, June 18, 2013, "At 9 am this morning Navajo people dropped pumps into the Central Arizona Project's canal and began pumping water into buckets then into the back of a water tank in the back of a truck. We came to demonstrate that water can be pumped using solar power. We came to demand Power Without Pollution and Energy Without Injustice! SRP can transition NGS to Solar. Navajos want a Just Transition!"

WHEN: promptly at 9am Tuesday, June 18; Press Conference to follow at about 10am
WHERE: Scottsdale Soleri Bridge at the intersection Camelback Rd & Scottsdale Rd.
This Action will be followed by a Press Conference in the Scottsdale Fashion Square parking lot.
WHAT:
More than 50 Navajo Nation community members and supporters will park water trucks that families use on the reservation alongside the Central Arizona Project (CAP) canal in Scottsdale today at 9am and use a solar-powered generator to pump water from the canal to the vehicles.
Tribal members are staging the demonstration to send a message to the owners of the Navajo Generating Station (NGS) coal-fired power plant near Page, Arizona that Navajo families want a transition away from a polluting coal industry on Navajo land that has powered CAP pumps for decades at the expense of residents’ land, health, water, and culture.
Major NGS owners include Salt River Project (SRP)(plant operator) and the U.S. government’s Department of Interior. Today SRP provides Arizonans less than 1 percent solar power.
The “Energy Without Injustice – Power Without Pollution” action demonstrates solar power as a solution. There is enough old mine land on Black Mesa to generate thousands of megawatts of solar energy, providing thousands of jobs and hundreds of millions of dollars for the regional economy.

Aging Navajo Generating Station (NGS) is among the most polluting coal-fired power plants in America and after decades of coal industry on Navajo Nation, many Navajo families have not benefitted; thousands still lack electricity and running water to their homes and haul water in trucks every week for cooking, cleaning, and drinking.