O’odham Zombies March Against the 202 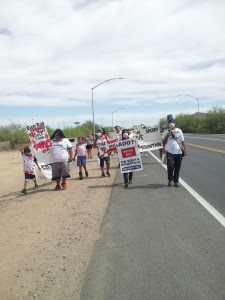 Posted on June 24, 2013
by Akimel O'odham Youth Collective
http://aoycblog.wordpress.com/2013/06/24/oodham-zombies-march-against-the-202/
June 24, 2013
Contact: Akimel O’odham Youth Collective
akimeloodhamyc@gmail.com
(520) 510-3407
http://www.AOYCBlog.wordpress.com
On the morning of June 22nd, 2013 a group of about 20 people rallied and marched to a hearing at the Boys and Girls Club in the village of Komadk in the Gila River Indian Community. The hearing was hosted by the Arizona Department of Transportation (ADOT) and the Federal Highways Administration (FHWA) to gather the public’s questions and concerns regarding the Draft Environmental Impact Statement (DEIS) on the proposed South Mountain Loop 202 Freeway Extension. The people who attended the march were from all over southern Arizona, including O’odham from the Gila River Indian Community, the Tohono O’odham Nation, and the Salt River Pima-Maricopa Indian Community.

Marching down 51st ave
As the march went down 51st Avenue to the Komatke Boys and Girls Club, members of the Akimel O’odham Youth Collective were dressed up as zombies. Unlike ADOT’s May 21 hearing held in Phoenix, public comments, signs, and protest banners at the Gila River hearing were banned by ADOT’s ground rules. The zombie protesters used their bodies as visual statements symbolizing the potential fatal effects to their health if the proposed freeway were to be built. Some wore nasal tubing and carried fake oxygen tanks while others wore surgical masks to further show the effects of air pollution from a freeway. During the march, most of the protesters held signs and banners, some playing off the zombie theme such as: Every year freeways kill more people than zombies. “This is what the future holds for us as O’odham if this freeway gets built. We can barely survive as O’odham today, but if this freeway is built and destroys Muhadag Do’ag ,then we are no longer O’odham and we’re doomed to become zombies,” Said Andrew Pedro, 19, an enrolled member of the Gila River Indian Community and a full blood Akimel O’odham.
When the march arrived at its destination, protesters were first met by Gila River police and personal security hired by ADOT. Due to ADOT’s ground rules against signs, banners, and public comment, which were publicized only a few days before the hearing took place, the group came prepared with messages on their shirts. Those who were made up as zombies wore shirts stating “We want to be O’odham, not zombies. “ Inside the gymnasium of the Boys and Girls Club, there were ADOT banners and poster boards on the edges of the room. These poster boards summarized subjects in the Draft Environmental Impact Statement (DEIS), released by ADOT on April 26th, 2013 after a wait of almost two decades. Rachel Charles, 17, an enrolled member of the Tohono O’odham Nation, stated her reasons for taking part in the zombie protest. “I marched today to let people know that what ADOT is trying to do goes against O’odham culture. I’m not from Gila River, but we are all one people and ADOT hasn’t ever consulted with the Tohono O’odham Nation about this freeway. Our voices need to be heard too. We won’t stay silent and let mimilghan take us over.” 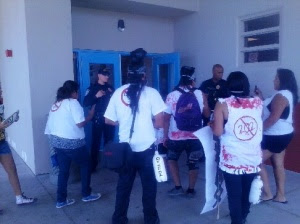 Police preventing signs and banners from going inside
Members of the Akimel O’odham Youth Collective pointed out misinformation on the poster boards. O’odham culture holds all of the South Mountain range sacred, as part of the origins of the O’odham. An example of ADOT’s campaign of misinformation is their poster summarizing cultural resources impacted by the proposed freeway. ADOT’s cultural resources poster portrayed that no traditional cultural property (TCP) would be affected by the western section of the proposed freeway. This contradicts a resolution passed by the Gila River Indian Community in 2007. When the Gila River tribal council passed resolution GR-41-07, it formally recognized all of the South Mountain range as a traditional cultural property, not just the acreage directly impacted by the proposed freeway. The resolution states “Now therefore let it be resolved that the Community Council hereby does acknowledge and recognize that the South Mountain Range in its entirety is a sacred place/ traditional cultural property and must be kept inviolate.”
Claudelle Valencia, 20, a descendent of the Yoeme (Yaqui), Onk Akimel O’odham (Salt River O’odham), and Tohono O’odham tribes stated, “Muhadag Do’ag is a highly significant part of our Himdag (traditional way of life) and we must defend our sacred mountain. As Indigenous people, we are put on this earth to take care of the sacred lands our ancestors have left us. We should not have our civil rights violated, and we are defending what was left here for us.”
In the DEIS, there are two TCPs discussed, both of which would be completely destroyed if the proposed freeway extension were built. These are the prehistoric Huhugam villages, Pueblo del Alamo and Villa Buena. The Huhugam are the ancestors of the O’odham people. When one ADOT representative was asked why the summarization poster was inaccurate from the information in the DEIS, the ADOT representative admitted the poster was outdated. Then another ADOT official stepped in and said the poster was not outdated, and that the poster was factual. When this ADOT official tried to show why the information in the poster was accurate, he was proven wrong by the contents of the actual DEIS, copies of which were circulating in the room. Then a third ADOT official stepped in and stated that the information on the poster was “up for interpretation”. Also not listed on ADOT’s cultural resources poster were other O’odham cultural resources such as petroglyph sites and prehistoric trails rich in artifact scatters.
The comment period for the DEIS ends on July 24th, 2013, only one month away. When the deadline is up, ADOT’s freeway study team has to research and respond to all DEIS comments. These answers will go into the Final EIS to be released sometime in 2014, which then starts a 60 day comment period. After all FEIS comments are answered, the FHWA will make a record of decision, which determines if the proposed freeway will be built. 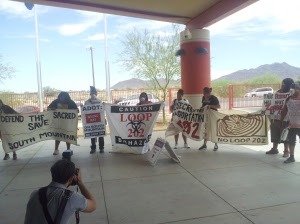 Rallying outside after forum
Draft Environmental Impact Statements submitted after the July 24 deadline will not be entered into the federal record.
There is still time to submit your comments. The deadline is very soon, so do not wait. Written comments are best sent as certified mail. All comments, regardless of the method of submission, are treated equally.
Mail: ADOT Loop 202 South Mountain Freeway Study
1655 W. Jackson Street
MD 126F
Phoenix, AZ 85007
E-Mail: Projects@azdot.gov
Phone: 602-721-7006
Online Comment : http://www.azdot.gov/SouthMountainFreeway
-Akimel O’odham Youth Collective & Gila River Against Loop 202