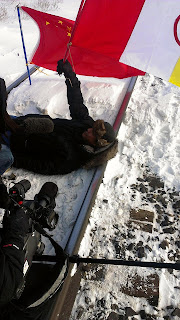 First Nation Anishinabe Roseau River
Censored News
Abas,
FARS News Agency
http://english.farsnews.com/newstext.aspx?nn=13920401000971
Thank you for publishing my article as is. I realize that the length of the article was an issue but required to deal with extensive documentation of the information.
It is 8 p.m. on the evening of Sunday June 23 here in Winnipeg. Tomorrow, at 2 p.m.,  I will be in court facing the Attorney General of Canada, the Attorney General of Manitoba and the Canadian National Railway who want the court to put a permanent injunction on our people from "trespassing" on CN railway lines.
In January 2013, we blocked a main railway line in Manitoba. In minus 34 degree Celsius for six hours. On January 15, a day before the blockade, CN got a temporary injunction while no one was there from us to oppose the injunction and we were served that injunction about two hours before we left the railway blockade. CN wants not only a permanent injunction, they want costs, plus damages which will be millions of dollars. They want to intimidate our people. Once they get the court injunction, we will move to begin boycotts of British Columbia lumber sold in the United States. We have support amongst people in the United States.
Everything we have done is peaceful and we sent the government advance notice of the blockade. January 16, 2013 was a commitment by the Chiefs to put pressure on Canada with action. AIM Winnipeg blocked a railway line. When railway lines are blocked by covert activity, the situation will become far worse. For now, there is peace in Canada, it will not last.
Publishing the article gives many people around the world the ability to anticipate what will happen in Canada. Americans have ignored the issues in Canada for a long time. In 1989, we organized THE RUN FOR HUMAN RIGHTS, and we ran 1,000 miles from Winnipeg to Chicago to try to wake up Americans to the human rights issues in Canada. More recently, as Chiefs, we were in Washington 12 days before the first Inauguration of President Obama. We were there to ask the incoming Obama administration to do something about the environmental devastation that the sale of oil to the United States was doing to northern Alberta in the Tarsands.
Nothing has happened from the American Government. They have ignored all our efforts to get them to do something about human rights violations in Canada. The American government will condemn Iran for voicing concerns about human rights violations in Canada but the American government itself will continue to ignore those issues.
On Thursday June 27, AIM Winnipeg will hold a Press Conference and a meeting to organize our own investigation process on five murdered and missing indigenous women whom the City of Winnipeg Police and RCMP have not solved. Shaun Lamb who is charged with three murders of indigenous women in Winnipeg has stated that he has information on five other women who were killed. One of our AIM leaders has been speaking to Lamb. Winnipeg Police Officer Sutherland laughed at Lamb in an interview, refusing to listen to what Lamb is saying. Totally unprofessional, all leads and information must be investigated not ignored. Robert Picton would have been caught years earlier if Vancouver police had been more diligent. Picton would not have killed 49 women if police had done what they were supposed to. They ignored leads just like they are doing here in Winnipeg.
Thank you for publishing the article, it is my hope that other countries will question Canada and its treatment of indigenous people. I will follow up with information on the Dakota people who are facing court in September for selling cigarettes. Another group, the Cree in northern Manitoba is facing court action by HudBay who is mining in their territory without permission from the indigenous people. The Cree face a $400 million lawsuit by HudBay for the blockade done by the Cree. Meanwhile, the mining of sixty different metals and minerals continues every day in Canada, all the while, Canada refuses to pay anything to the indigenous people for those natural resources.
Terrance Nelson