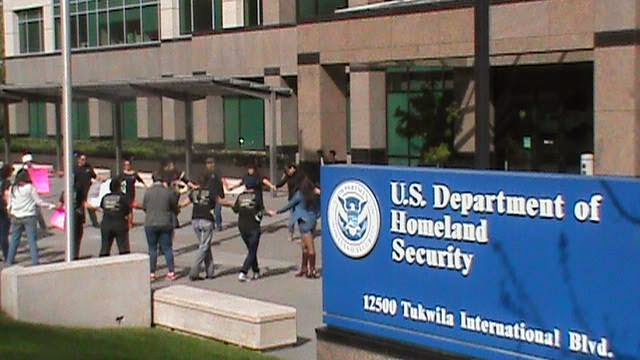 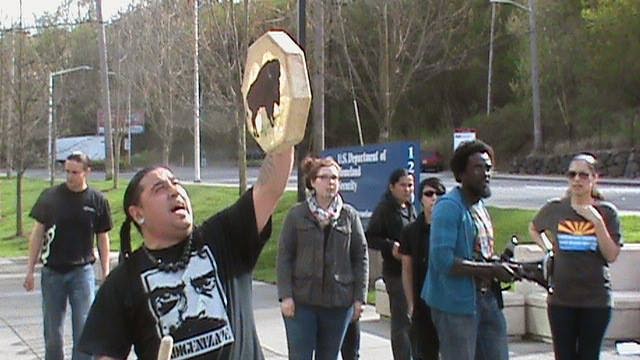 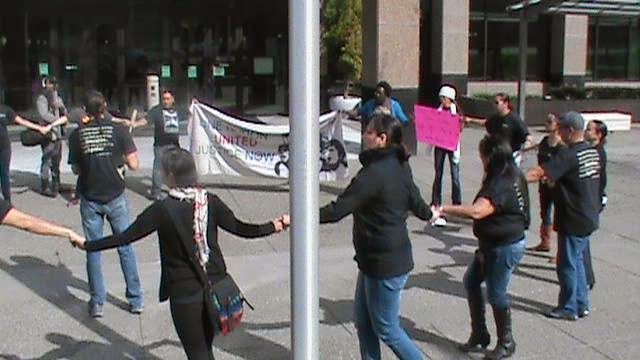 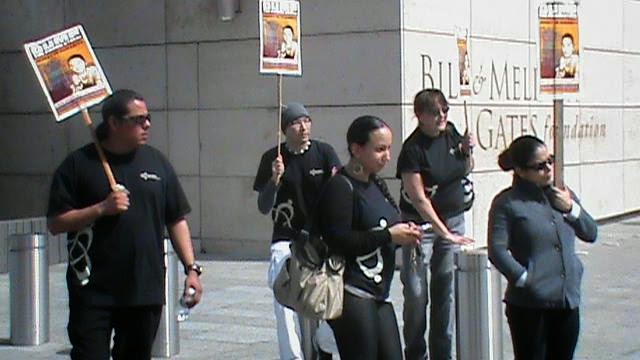 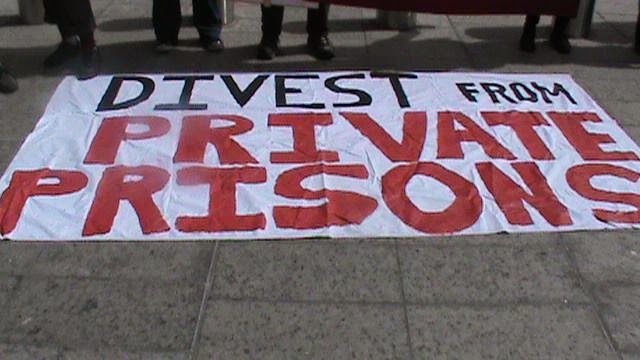 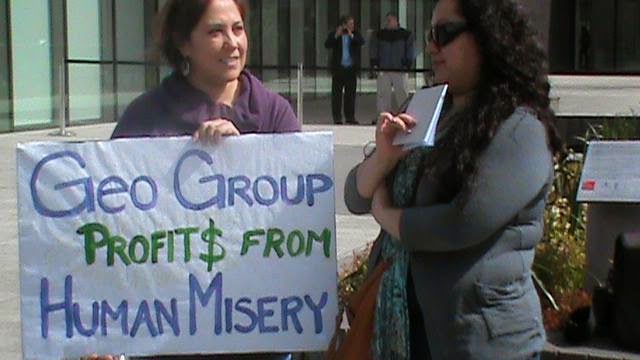 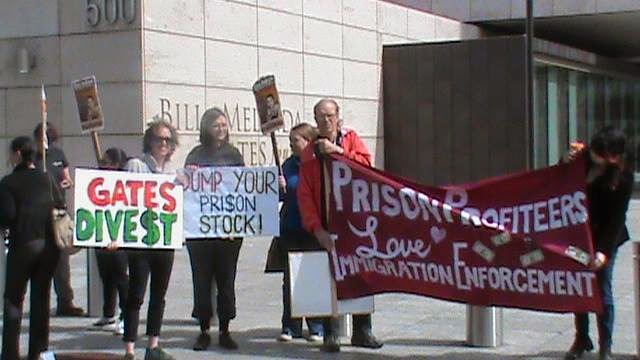 SEATTLE -- Native Americans joined protests today in solidarity with hunger strikers in detention centers. Natives Americans protested both at Homeland Security's ICE headquarters and at the Bill and Melinda Gates Foundation, pressing the Gates to divest in private prisons. "The Original Homeland Security counted coup on Barack's Homeland Security in solidarity of our brothers on hunger strike in detention centers. Pray for all Red Nation families of this hemisphere,” Andrew Ironshell said.
Gates is a stockholder in both GEO private prisons and G4S global security.
Bill Gates is one of the top shareholders in the notorious prison profiteer G4S. See G4S shareholder info: http://www.g4s.com/en/Investors/Investor%20Relations%20Information/Major%20Shareholdings/

G4S has been charged with torture and abuse in prisons around the world. A young Palestinian father died from torture in an Israeli prison operated by G4S http://electronicintifada.net/blogs/ali-abunimah/young-palestinian-dad-died-israeli-torture-forensic-expert-says
G4S is the same company that has the buses snaking along the Arizona border searching for migrants to transport into detention. The Arizona border contractor was formerly Wackenhut. However, Wackenhut split into two companies for maximum profiteering from human misery, one with the US border transportation contract now under G4S, and the other is a separate corporation GEO private prisons.
G4S is among those included in the Boycott Israel campaign for abuse of Palestinians.
http://boycottisrael.info/aggregator/sources/1
Why would Bill Gates want to invest in private prisons? Because there is big money now in security and private prisons, especially prisons which torture Palestinians and others living in border communities around the world.
Corporate profiteers from human misery
Meanwhile, Wackenhut was previously security for Peabody Coal on Black Mesa, and part of the oppression of Navajos forced into relocation to clear out Black Mesa for Peabody’s coal mines on Black Mesa.
As always, follow the money, and the contracts.
The Israeli Apartheid contractor Elbit Systems is another one. The US Homeland Security just gave Elbit Systems, an Israeli defense contractor, the huge southern US border contract. So the Israeli spies are now building the US spy towers on sovereign Tohono O'odham land. O'odham human rights activists say this is only possible because the Tohono O'odham government is corrupt and co-opted by the US government.
There's a lot of US hoopla about the US economy recovering, but these mega contracts are not going to US companies. G4S is London/Belgium based, and Elbit is an Israeli company. The foreign corporations all have sub-offices in the US.
BrightSource, another Israeli corporation, built the mega solar project recently in the California desert. The Obama administration used it as an example of a recovering US economy. Meanwhile, there were celebrations is Israel over getting the US contracts.
The Ho-Chunk, owners of the indianz.com website, also just received a huge US spy contract with the Pentagon. http://siouxcityjournal.com/news/local/state-department-awards-ho-chunk-division-million-contract/article_20a58d37-5aae-52c3-8043-b492a1878e64.html 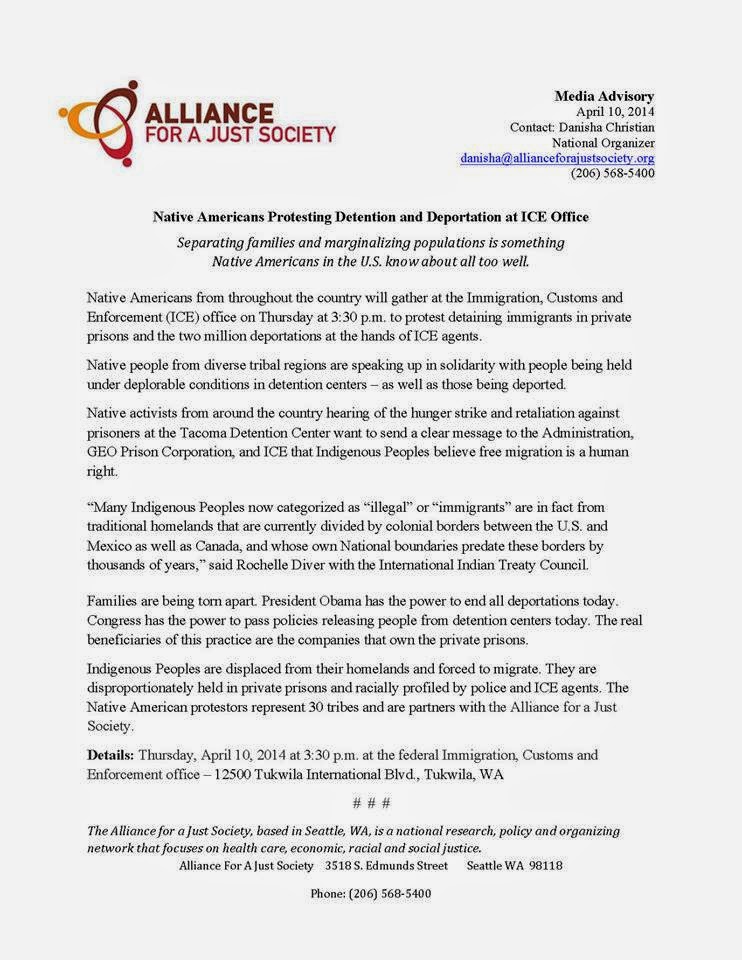