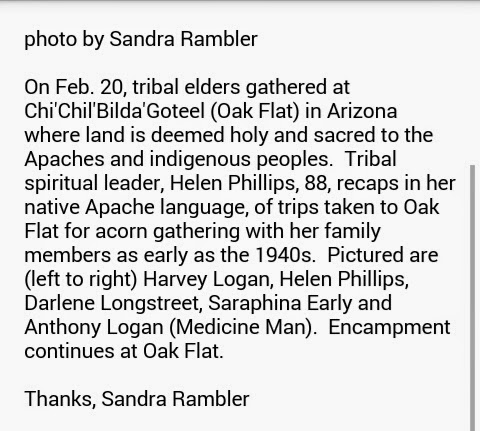 Read update and background on theft of Apache sacred land for copper mining
http://tucson.com/news/state-and-regional/occupy-oak-flat-mining-protest-in-its-third-week/article_f551fab1-853b-5826-9037-9ddb3739e5fc.html
at February 20, 2015 No comments:


Greetings Relatives,
An inter-tribal and community memorial service to honor the life of Tomas Reyes, will be held at Inter-tribal Friendship House (IFH), 523 International Boulevard, in Oakland. Thomas passed to the spirit world with a pure heart on Wednesday, February 11, after months with cancer and other complications.  His cremation, and spirit, was released in a small ceremony on Tuesday 17th, in Oakland.  Indeed, we are in deep respect and hold in high reverence to California Indian Nations who embraced and guided Tomas through his final hours with us.

You are cordially invited to come to IFH on Saturday, February 28th.  The memorial celebration will be held from 12 to 4 pm. The All Nations Singers, and drummers are welcome to join us; as well as Traditional Danzantes who are interested, please coordinate with Alvaro Tellez at 415-286-2448.  Please bring food for a feast, with desserts and fruits (apple n cherry pies!), some flowers, and to make for an Alter (come early…) all to share and potlatch.  (no sodas, diet, etc. please!).  And, please bring pictures you may have of Thomas to pin-up then share with his family for the times he was missed!

This is the time to also acknowledge the quiet strength of Tomas, our brother in the struggle.  Come and share experiences about him, and talk story!  All friends, flags, organizations, and campaigns where Tomas participated are welcomed to attend.  A meal will start at approximately 12:15 pm with a blessing of the food.

Tomas (notice I dropped the h!) was born in Fresno, California on October 9, 1944.  He is of Tarahumara (Mexico) descent. Tomas often said to some that his animal symbol relation is a Coyote/Dog.  As a Chicano from the San Joaquin Valley, Tomas continued to evolve in his spiritual journey leading him into the Bay Area, and the realization of his Indigenous roots.  Tomas is a veteran of Vietnam; a graduated from the University of California at Fresno State with a Masters Degree; a long time UFW supporter; in solidarity with DQ University, Big Mountain Arizona, and Segorea Te (Glen Cove); a Sun-Dancer; AIM warrior; and a Long Walker (across USA-08).  Tomas also worked with the UN Non-Governmental Organization (NGO) International Indian Treaty Council, SF Swords to Plowshares, and was a social justice community organizer for human rights.  Tomas was always there to give a hand and his word.  He will be missed but not forgotten!  Others will rise and follow in his path.

At 1:15 pm an open microphone will be provided for those in attendance who wish to speak.  Also, Special representatives, and Wounded Knee 73’ veterans “Point Man” Lenny Foster (Dine/Navajo), spiritual advisor to political prisoner Leonard Peltier, and Ms. Jesse Riddle (Pit River/Apache), will be in the house.  This portion of the memorial will begin with AIM spiritual advisor Fred Short, and the AIM staff carrier.*  At approximately 2 pm Ms. RosaLinda Palacio, partner to Tomas and handling his affairs, has requested time to speak and to share special gifts to friends of Tomas.

At 2:30 there will also be a blanket offering/request to raise funds to defray some costs incurred for Tomas’ cremation and medical costs.  Finally, Companero Guillermo Vasquez, fellow Sun-Dancer, wishes to acknowledge people who will be coming to the ceremony….

Our heart-felt condolence go out to the family for their loss.  And to his son Tom Anthony, and daughter Endelisa, we extend our hand in friendship and deep appreciation for their father's sacrifice for the peoples, and Mother Earth to live on.

See AIM-WEST website/Facebook for more details. And, if you have photos to share for a slide presentation about Tomas, please email to me, or contact AIM-WEST.

Mohawk Nation News
Please post & distribute. Nia:wen.
MNN. Feb. 20, 2015. Notice how the media panels of “experts of nothing” try to tell us what the government line is. They repeatedly call critics of government and corporate theft of resources and destruction of the environment as “extremists”! Genocide is an old on-going settler colonial strategy.

Canada wants multinational energy corporations to continue extracting and burning tar sands and other fossil fuels, leading to extreme weather and food shortages. An RCMP initiative calls critics of climate change as “environmental extremist radicals”, “money-launderers” and “anti-petroleum extremists”. These same words describe terrorists and Jihadists in the new anti-terrorism Bill C-51. They are labeled as “criminals” to the oil and gas industry.
Ongwe’hon:weh [the natural people of Great Turtle Island] who peacefully legitimately object to toxic pipelines, fracking or oilsands in our communities and theft of our resources are “Aboriginal extremists”. [See link at end – Critical Infrastructure Intelligence Assessment report 2014]. We stand against true terrorism, which is the destruction of Mother Earth and her sacred blood, the waters.

P.M. Harper to Eva, John, Jason…
The experts say there is a growing, highly organized and well-financed, anti-Canadian petroleum movement, that consists of peaceful activists, militants and violent extremists.
Experts say extremists engage in “criminal” activity to promote their anti-petroleum ideology. Prime Minister Harper labels any Ongwe’hon:weh resistance to anything as
“extremism”, which is another word for “terrorist”. He promises to protect his energy and resource extraction partners while pretending to protect the  Canadian public.
The RCMP, CSIS as well as Public Safety Canada are Critical Infrastructure Partners with their private industry security counterparts.

The responses to Ongwe’hon:weh blockades so far has been snipers, dogs and tasers. Harper is most worried about Canadians seeing the truth about his neo-Nazi radical business plan for the Corporation of Canada.
Aerosmith sings it like it is in “Eat the Rich”: “And I just can’t see no humor about your way of life. I think I can do more for you with this here fork and knife. Eat the rich! There’s only one thing they’re good for. Eat the rich! Take one bite now. Come back for more. Eat the rich! I gotta get this off my chest. Eat the rich! Take one bit now. Spit out the rest!”

Aljazeera: US Land Grab from the Apaches 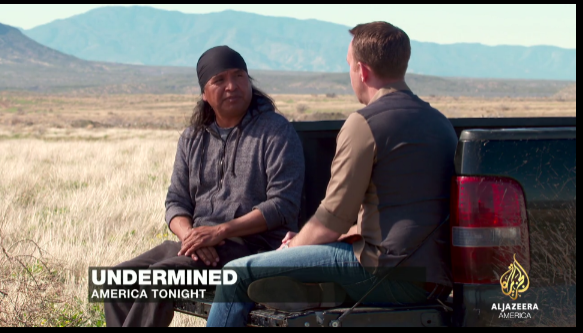 The US government's land grab from the Apaches


Why did Congress include a lucrative Arizona land swap benefiting a foreign mining company in a must-pass defense bill? 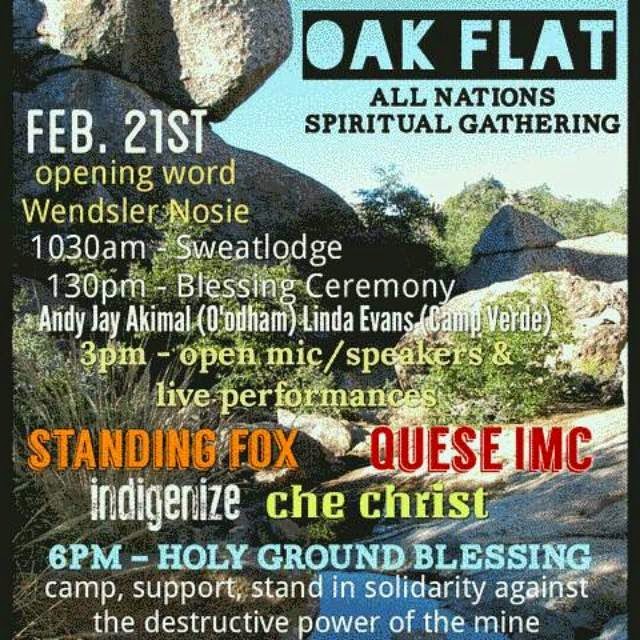