Behind the Story: FBI repression of anti-fossil fuel activists 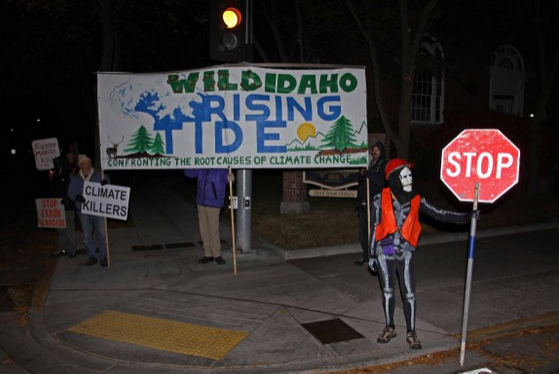 Hi Brenda,
"My name is Sasha, and I am a co-founding moderator of the EF! Newswire.
Last month I published a story through the Defending Dissent Foundation about state repression of anti-fossil fuel activists in Cascadia:

http://www.defendingdissent.org/now/news/why-is-the-fbi-harassing-activists-in-cascadia/
The story was immediately posted in The Ecologist, CounterPunch, the

Global Justice Ecology Project, Green Is the New Red, and Earth Island
Journal, among other publications.
Then it was picked up on by Becky Kramer, writing for the Idaho

Spokesman-Review:
http://m.spokesman.com/stories/2015/jan/23/fbi-contact-unwarranted-environmental-activists/
Then it made its way to AP, through which it was disseminated to Oregon

Public Broadcasting, Washington Times, Houston Chronicle, and other
national newspapers:
http://www.washingtontimes.com/news/2015/jan/23/some-megaload-protesters-report-contact-from-fbi/?page=all
And just today the story was recast by the Canadian Press, where it made

its way to the Globe and Mail, and other international sites:
http://www.theglobeandmail.com/news/world/anti-oil-sands-activists-in-the-us-are-getting-visits-from-the-fbi/article22851903/
The story behind the story is actually quite interesting. The

Idaho-based anti-megaloads group Wild Idaho Rising Tide (WIRT) has
been fighting megaloads since 2011, and I got the scoop about megaloads
coming through Oregon from a WIRT activist, Helen Yost. I put up an
article about the megaloads in Oregon, headlined "Be the First Line of
Defense Against Megaloads," and a meeting was organized among
environmentalists around the area here in Portland. I had varying
degrees of involvement with the campaign as both a journalist and
activist, and have also been marginally involved in the same capacity
with Portland Rising Tide. I submitted a story idea about state
repression of anti-fossil fuel movements here to Brenda last year after
my pal Arun Gupta gave me the reference, and we were working on the
story for about a month when it seemed as though it had gone cold. There
just wasn't enough about FBI visits, and I frustratedly put down my pen
for a day or two when suddenly my friend Helen received the pomo
equivalent of a knock on the door — three texts from the FBI. I quickly
interviewed her about it, banged the article into shape, Udry and
Wishnia at Defending Dissent made a few editorial suggestions, and it
went live. Within a few days, the story was all over the place, and a
month later it is everywhere!"