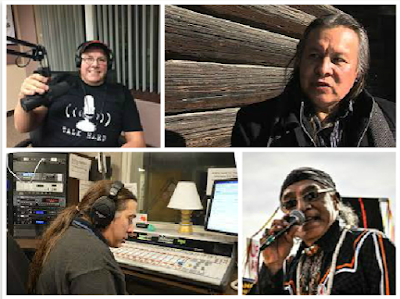 Listen to these Native American radio hosts online.
First Voices Indigenous Radio host Tiokasin Ghosthorse, Lakota from Cheyenne River in South Dakota, has spent decades exposing the truths that the mainstream feared. The WBAI broadcast in New York is carried nationwide and online.
John Kane, Mohawk, at Let's Talk Native in New York describes this week how Canada has downplayed the genocide in residential schools, referring to it as "cultural genocide." Native children were kidnapped, tortured, raped and murdered in those schools. The cemeteries and unmarked and hidden graves reveal the horror suffered by those children in Canada, the US and Australia residential schools that were responsible for genocide.
In Northern California, James Browneagle at Tribal Voices Radio exposes what the other media ignores, including topics from the Mohawk Nation News and the ongoing resistance to Sen. John McCain's copper mine on sacred Apache land in Arizona.
Listen to the upcoming program on Make No Bones About It in Washington state on Traditional Mentoring with host Raven Redbone. Lakota Chief Arvol Lookiing Horse, 19th Generation Keeper of the Sacred White Buffalo Calf Pipe, has been a regular guest on his program. Listen to the words below from Chief Arvol Looking Horse about World Peace and Prayer Day, which is June 21.

Support Native American radio hosts
These Native radio hosts work really hard and do ground-breaking work, with little or no financial rewards, often paying out of their own pockets to keep going. I'm happy to see others supporting them. There's a great deal of cutting edge radio news that could be shared as programming, but of course many of the local stations censor so many issues, either because of local pressure or their owners, or because of control by their advertisers, like big coal and big oil.
Tiokasin took the lead in exposing the abuse by the US Border Patrol agents of Tohono O'odham, which continues, along with uranium mining on Indian lands. He also had live shows when we were in Bolivia at the Mother Earth gathering, and many other regions. Mohawk John Kane is fearless in his exposures. James Browneagle stays current on what he exposes from his homeland in northern Calif. Raven Redbone has maintained a spiritual focus and continues to honor the traditional teachings and elders in the northwest.
at June 12, 2015 No comments: