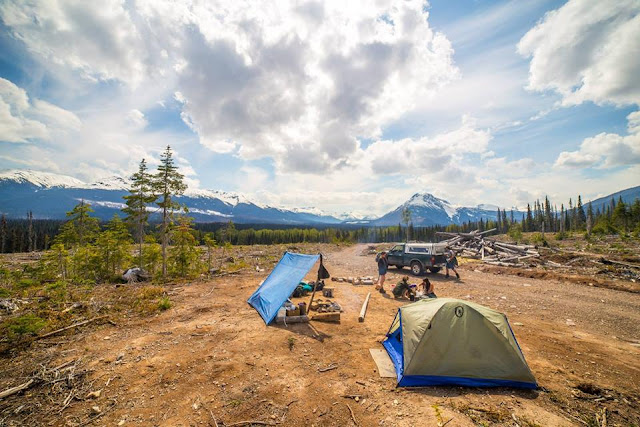 TransCanada has been relentless at attempting to cross onto Unist'ot'en Yintah. The TransCanada "security guy" keeps asking leading questions that they hope will help them in filing for an injunction. Us and our supporters refuse to answer their entrapment questions and we keep reiterating the fact that we are protecting the Unceded Unistoten Yintah and are following through with Knedebeas' instructions to keep pipeline companies out. TransCanada needs to jump through the environmental assessment circus act before applying for permits. They will not succeed in their plans because our will and integrity outweighs their bankrolls. Humility and self-sacrifice is our chosen path towards a future with a safe and healthy environment for our unborn generations.

We have been operating 2 separate full time blockades for a bit more than a week. We´ve held up helicopter crews and evicted them From the Gosnell Creek Valley as well as turned around survey crews attempting to enter the Yintah from the Chism Forest Service Road. There is a lot of footage of both types of encounters and we are sifting through them to create a video update which will likely surface in a couple of days. An incredibly strong turn of recent events was the return of Freda to her Yintah and chasing out surveyors as well as their Wet´suwet´en sell-out counterparts. In previous days the arrogant and mouthy turds were being confrontational with the volunteers who were assigned to protect the Yintah from Pipeline work. Today as Freda stood at the secondary road block the once-tough sell outs stayed in their truck and left it up to their security pawn to face off with her. The look of defeat and pathetic pitifulness of the surveyors was priceless. Also, tripods are now occupying the spaces where heli crews were landing in previous days. As promised, things are changing with the return of the leaders.
at June 16, 2015 No comments:


On Tuesday, July 21, our fearless Apaches joined by Indigenous Peoples from all over the world will be on Capitol Hill sending a strong message to the White House, the Senate House, the House of Representatives that OAK FLAT IS NOT FOR SALE.