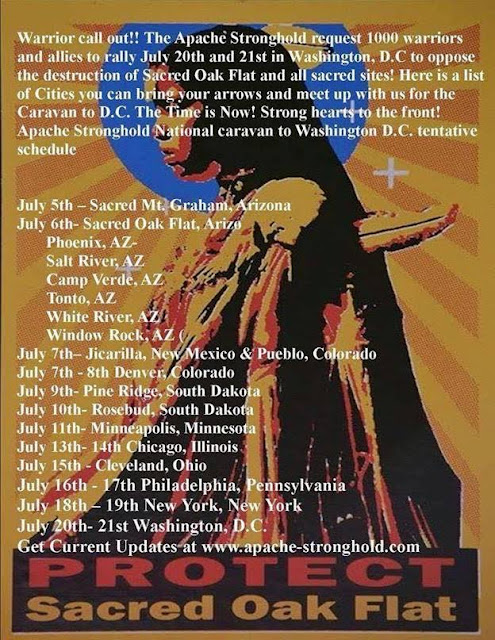 
by Akimel O'odham Youth Collective
By Akimel O'odham Youth Collective
Censored News
On June 17, the Arizona Department of Transportation (ADOT) hosted a Loop 202 networking event at Rio Salado College. Representatives from the three private consortia bidding to receive the contract to build the 202 extension attended the event. The three construction groups are South Mountain Mobility Group, Connect 202 Partners and South Mountain Development Group.
The protest was led by O’otham from the Gila River Indian Community and the Salt River Pima-Maricopa Indian Community. About twenty more 202 opponents from other Indigenous tribes and the Phoenix area supported the O’otham. Earlier that morning, Rio Salado College was chalked with anti-202 and anti-ADOT slogans, so that when the main group of protestors arrived, police were expecting a protest. The police were inside the building with ADOT and the three construction groups, so at the start of the rally, protestors stood outside and chanted “No Desecration for Transportation!” One member of the group, Alicia Morales, a Gila River Indian Community member, was allowed to go inside where the private contractors were meeting. Alicia stated that she was then told by police that she could not go inside the building, because she was carrying an anti-202 banner. Morales was able to get inside with the banner and stated that from inside the building, “I could hear everybody outside and everybody in the meeting could hear the chants as well.”
During this time, protestors opened the doors of the building to ensure that ADOT and the construction companies could hear the protest outside. Police then pulled the door handles out of their hands and forced the doors shut. The group countered by entering the building through another door. Traditional O’odham singers began to sing inside while others round danced around them. Other protestors held up banners around the traditional singers and dancers to not allow police through to stop the singers. After the songs were over, the group attempted to enter the conference room where the three groups were presenting their project overviews, and a panel discussion about 202 construction was taking place. However, the doors were locked from the inside. Throughout the morning’s protest, police and Rio Salado College security repeatedly told the protestors to leave or quite down. This did not happen until the ADOT event ended.

In an interview with KJZZ 91.5 FM, the local National Public Radio affiliate, Andrew Pedro, a Gila River Indian Community member, explained the connections between threats to Indigenous sacred sites around Arizona and the Sun Corridor, Arizona’s portion of the CANAMEX Corridor. The CANAMEX Corridor is a NAFTA superhighway designed to help facilitate international trade for multinational energy extraction corporations-the mining, coal, and oil industries in Canada, Mexico, and the United States. Pedro also said that the protest carried the message to ADOT and the three groups hoping to build the 202 that O’otham sacred land is not up for negotiation, and that Indigenous people will defend their lands, to stop their destruction in the name of progress and convenience. You can hear a short portion of the interview here
Fair Morago, 35, from Sacaton on the Gila River Indian Community said, “With the Loop 202, our ways of life are threatened. I am a mother, and I want my children to know where they come from. I felt the presence of our people with us as we sang. I am not afraid to fight and protect that feeling, for myself and my children.” Near the end of ADOT’s networking event, the protestors found an entrance to the conference room. They went into the conference room, with about half of the protestors going in the meeting with the traditional singers. Police rushed to block the doors after the first half got into the conference room, and would not let anyone else into the room. Before leaving the conference room, the protestors inside and outside the conference room chanted “No 202” together as the ADOT networking event ended. 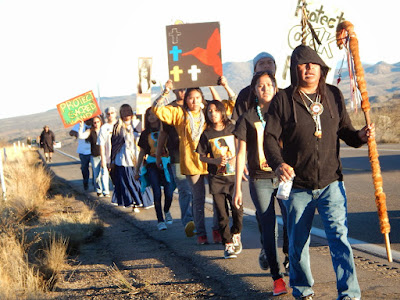 WASHINGTON, D.C. – Ranking Member Raúl M. Grijalva today introduced the “Save Oak Flat Act,” which repeals a recent congressional giveaway of sacred Native American land to a company called Resolution Copper co-owned by multinational mining conglomerates Rio Tinto and BHP Billiton.
Section 3003 of the 2015 National Defense Authorization Act authorizes the transfer of 2,422 acres in the Tonto National Forest to Resolution Copper despite its cultural importance to the San Carlos Apache Tribe and the Yavapai-Apache Nation. The area, known as Oak Flat, has been home to tribal acorn gathering and traditional religious ceremonies for centuries. If Resolution Copper continues with its stated plans to establish a so-called block cave mine on the land, its environmental and cultural value will be severely damaged.
The proposed mine is directly adjacent to Apache Leap, an especially sacred site where Apache warriors pursued by U.S. cavalry leapt to their deaths to avoid capture. Vernelda Grant, the tribal historic preservation officer for the San Carlos Apache Tribe,expressed concern in Science last year that, as the magazine put it, the mine is “right next door” to Apache Leap and “having a working copper mine next to the site will change how people experience it.” Section 3003 allows the following at Apache Leap itself:
(B) AUTHORIZED ACTIVITIES.—The activities that are authorized in the special management area are— (i) installation of seismic monitoring equipment on the surface and subsurface to protect the resources located within the special management area; (ii) installation of fences, signs, or other measures necessary to protect the health and safety of the public; and (iii) operation of an underground tunnel and associated workings, as described in the Resolution mine plan of operations, subject to any terms and conditions the Secretary may reasonably require.
Section 3003 has attracted opposition from tribal communities across the country because of the dangerous precedent it sets. By requiring the conveyance of the land regardless of the outcome of mandated federal consultation with affected tribes, it allows Congress essentially to ignore the basic principles of federal-tribal relations. The language also requires the conveyance regardless of the outcome of the mandatory environmental review process, ignoring decades of environmental precedent requiring land and water impact analysis ahead of major federal actions.
“What this unpopular corporate giveaway was doing in the national security bill is anyone’s guess, and we shouldn’t wait any longer to repeal it,” Grijalva said. “Congress shouldn’t be in the business of helping big corporations at others’ expense, and it certainly shouldn’t break faith with Native American communities. I’m proud to lead our bipartisan team in saying we should repeal this giveaway and stop treating corporate handouts as national defense priorities.”
The bill is cosponsored by Republican Reps. Tom Cole (Okla.), Markwayne Mullin (Okla.) and Walter Jones (N.C.) and Democratic Reps. Betty McCollum (Minn.), Norma Torres (Calif.), Patrick Murphy (Fla.), Alcee Hastings (Fla.), Ben Ray Lujan (N.M.), Raul Ruiz (Calif.), Tony Cardenas (Calif.), Xavier Becerra (Calif.), Jared Polis (Colo.), Ruben Gallego (Ariz.) and Gwen Moore (Wisc.).