Audrey Siegl said, "I've got my warrior face on."

Audrey to Shell drilling rig at sea, with swimmers were in the water: "No tar sands, no pipeline, no Arctic drilling! You have no consent! You are not welcome!"

Audrey describes how she was empowered by confronting Shell on the water and not bowing down.

"My dad always says 'Where there is a breath of life there is hope.'" 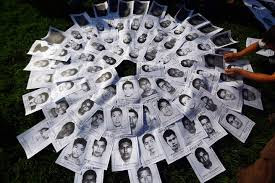 In a story that puts a new twist on the fates of 43 forcibly disappeared students in Mexico, Proceso magazine has reported that one of the students may have been an active member of the Mexican military.


The news came in response to a written request filed by Proceso reporter Ezequiel Flores Contreras with the Mexican Defense Ministry (Sedena), soliciting information on possible members of the Mexican military who were among the 43 students from the Raul Burgos Isidro Rural Teachers College of Ayotzinapa forcibly disappeared by police and alleged drug cartel gunmen on September 26 and 27 of last year in the city of Iguala, Guerrero.
Read more »
at June 19, 2015 No comments: