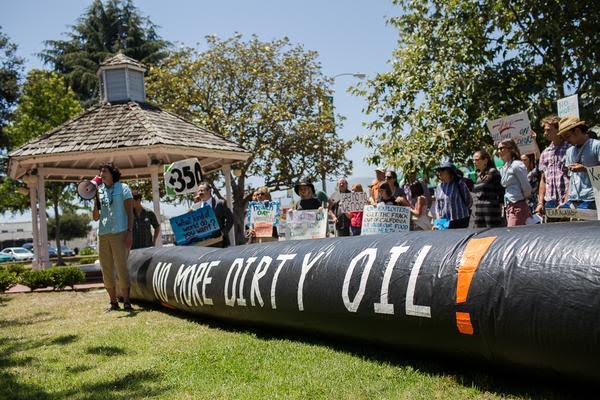 by Dan Bacher
Censored News
As crews struggle to clean up crude oil off the beaches and wildlife along the Santa Barbara County Coast, dozens of people with an inflatable pipeline, hazmat suits, and a 20 foot tall mock oil derrick gathered at the Goleta Valley Community Center outside Santa Barbara on Wednesday, June 24, to urge the State Lands Commission to reject Venoco’s bid to expand offshore drilling.

The proposed project would feed oil into the same decades-old and badly corroded pipeline, owned by Plains All American Pipeline, that burst on May 19, spilling more than 100,000 gallons into the coastal environment.

In one of the biggest environmental scandals in recent California history, the very same oil industry lobbyist who is pushing for increased offshore drilling and fracking in California - and is now serving as the lobbyist for Plains All American - is the exact same lobbyist who chaired the panel that created the "marine protected areas" that are now being fouled by the Santa Barbara Oil Spill. 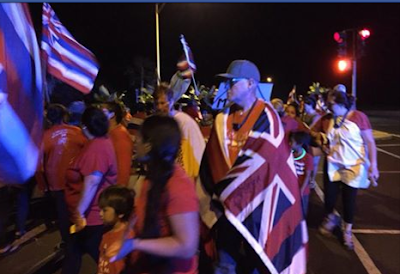 The Nihigaal Bee Iina, Dine' walkers, are now on the third part of their journey to the Sacred Mountains. The Journey for Existence is a walking prayer which gives voice to the defense of the land, air and water.

Nihígaal bee Iiná presents the second stop in their traveling Block Party across the Western Agency this weekend at the Tuba City Skate Park. There will be bands, free food, info sessions, and workshops! Invite your friends and come meet the crew and other presenters!

Update Friday, June 26, 2015: Yá'át'ééh shik'éí dóó shidiné'é!
We are hosting a Block Party event tomorrow at the Tuba City Skate Park. As we prepare, there are a few things we need from you to make this event a success. First off, we need your help spreading the word!
Here is a direct link where you can find updates and more information on tomorrow's event:
https://www.facebook.com/events/993745410656924/
+ Live Bands
+ Workshops
+ Presentations
+ FREE FOOD
We are also asking the community for the following:
+ Canopies: We need to borrow canopies to keep the sun off of the crowd and off of our food support crew, it has been very hot during the afternoon hours, we want everyone to feel comfortable whether they are enjoying the live bands, presentations, or one of the workshops.
+ Fresh Produce: Food is medicine. We want to encourage everyone to maintain a healthy diet and a healthy lifestyle!
+ Block Ice or Dry Ice: The ice will be used to keep the food cold.
----
About the Walk today:
The walkers are currently on Rifle Range Road (Road 6731 on the map) just south of Tuba City. They will then get back on the 89 and walk 3.1 miles to Tuba City.
Hey Tuba City, it's your time to shine! Come out and enjoy this free event, bring your family, friends, and skateboards!