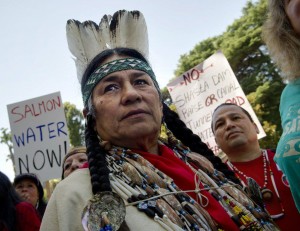 The Winnemem Wintu tribe, allies and other tribal representatives will be rallying and waving signs outside the 2nd California Water Summit this Monday, June 29, at the Westin Sacramento to protest Gov. Jerry Brown’s efforts to exclude California tribes, environmentalists and other important stakeholders in this public meeting about massive state water infrastructure projects.
The summit is being advertised by the Brown administration as a conference to discuss the “latest developments including project selection for the $7.5 billion water bond” that is now available after the passage of the Water Quality, Supply and Infrastructure Act of 2014.
Registration for the summit is nearly an astounding $1,500 per person, and there have been no efforts to include tribal representatives, environmentalists or anyone who is advocating for sound water policy that will benefit future generations, local ecosystems and salmon and other fisheries.
No mention of tribal water rights is listed on the agenda, and it seems the only people attending will be water districts’ staff, government scientists, corporate representatives and other advocates for Governor Brown’s pet water projects like the Shasta Dam raise and the twin Delta Tunnels, both of which would be devastating for salmon and tribal cultural resources and sacred sites.
“Most of the California Indians who are working on tribal water rights and for healthier rivers can’t afford a $1,500 registration fee,” said Winnemem Wintu Chief and Spiritual Leader Caleen Sisk. “This is clearly an effort by Governor Brown to exclude the tribal voice, shove out anyone who disagrees with his destructive water plans and provide an opportunity for government and the big water power brokers to collude behind closed doors.”
Though California is suffering through five years of drastically low rainfall, Chief Sisk said the water problems are all man-made, due to poor management and greed. As the low rainfall puts a stress on California’s boondoggle of a water system, it has never been more important for the indigenous perspective to be heard and for tribal water rights to be acknowledged and upheld. The Winnemem Wintu have an especially important stake in the bond funds as many think they could be used to support the Shasta Dam raise to enlarge Shasta Lake’s capacity, which in turn would flood or damage about 40 sacred sites vital to the Winnemem’s religion and cultural practices.
“This is a summit that is meant to help these people peddle Brown’s projects that will benefit his buddies: agri-business and water sellers in Southern California,” Sisk said. “They are not interested in what’s best for the people of California and their children.”
All supporters are invited to join the Winnemem and their allies at the Westin Sacramento, 4800 Riverside Boulevard, at 7 a.m. Monday June 29. Please bring signs and any other items to ensure Gov. Brown hears our message loud and clear: He can no longer ignore the indigenous people of California!
at June 27, 2015 No comments:

Please post & distribute. Nia:wen.
MNN. June 27, 2015. The CROWN put Joe Norton back in as chief of Kahnawake. The previous chief did not deliver the goods on time. In the pretend democracy the incorporated band councils, also called “hang around the fort INDIANS”, obey the CROWN that makes the rules and decisions. The bankers out of London have been running a Ponzi scheme ever since they got here. They lend money to their carpetbaggers to come here and steal what they can from us. The bankers get a return on their money that should have been paid to us for our resources. The illegal Vatican monetary/military matrix was set up to create classes of haves and have-nots. They stole through every means possible with nothing to back it up but force, intimidation and genocide. The band council INDIANS are set up to help them.

He owes us!
The colonial matrix is the protection racket. The loan sharks lend money at high interest or a promise to protect us from them. Their military collection agency has been collecting from us by threatening to break our legs, burn down our homes or murder us.
The CROWN wants to remove Kahnawake as a tax free zone. Norton and his backers made previous attempts to bring in a casino and taxation. The people said “No” twice. In the casino matrix, controlled by Canada, the workers don’t pay taxes at first. After 15 to 20 years, the tax department comes in and demands taxes for the past years. 100% of the profits go to a small group of sell-outs and the corporate government. If we don’t pay them, our land, homes and resources are confiscated. We are arrested or removed.

Norton & friends: “We’re gonna  have to do it our way!”
In the Akwesasne people’s casino issue, the outside white population saw our prosperity. They pressured Albany and then Washington to shut us down and pass laws restricting all our economic growth. For us Ono’ware:geh land, waterways and airways are tax free zones.

Our people are given the idea that our education, health and social services are being given to us by the colonial settlers. It is our funds being doled out to us. All Ponzi schemes collapse when the resource owners start resisting. There is only one business here for the CROWN on ono’ware:geh/Great Turtle Island, that is the theft of our resources based on genocide. The ongwe’hon:weh are exposing and resisting the “bag men” who try to collect the CROWN’S “protection” debts.
With the help of the incorporated band council INDIANS, the CROWN plans to exterminate us and control all our businesses through removing our clans and the law of the land, kaia’nereh:kowa. Many of our business people with their outside backers violate our sovereignty by going to Ottawa and Washington to beg for permission to set up businesses. Nations don’t do that! The CROWN is at our door. Every ongwe’hon:weh knows who owes who! 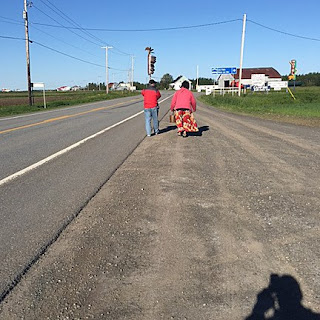 Saturday, June 27, 2015
Water Walkers in Canada need women to carry the water. Please come help or send help. Grandmother Josephine Mandamin is always ready to walk, but shouldn't have to do this for more than a few steps. Please, come walk for her and for those in your community who cannot. Miigwech.

TO CATCH UP WITH THE WALKERS, GO HERE: http://share.findmespot.com/shared/faces/viewspots.jsp?glId=0s206bMhfzd3PSeGrrQva0xpTAG1lGqV8 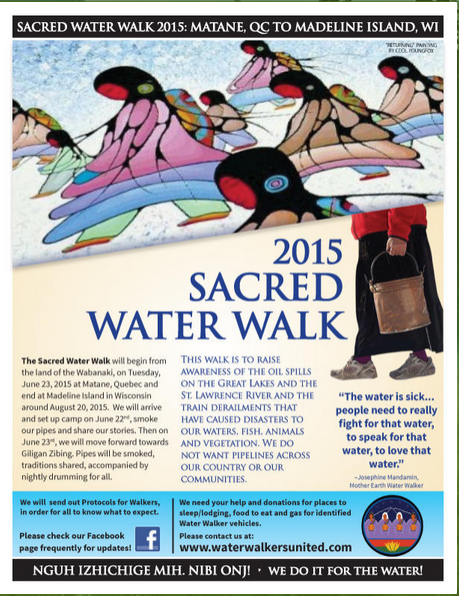